if you just want to cut to the chase, the final product can be seen, cloned and forked right here on GitHub:

At the beginning of this year I got hired by a new company to help with a new (but not public yet) project. For this, we want to get into design systems and component libraries.

The topic itself isn't new to us, but implementing one ourselves is. I got the task at finding a setup that

Let me elaborate the second point a but more as this is quite important. If you were to create a component library and bundle everything straight forward you would likely end up creating a single file in the CommonJS (CJS) format.

Today we have several file formats for JS files in the wild and most of them are still actively used. You can read about the different formats in this very good article by @iggredible

The non-deep-dive version is that there is a commonly used format, coincidently named CommonJS (or CJS) and there is a new_ish_ format that most will be familiar with, ES Modules (ESM).

CJS is what Node.js traditionally used. ESM is newer and standardized (CJS isn't) and will be probably be Node.js' format in the future. It can natively be used since Node.js 12 and is currently flagged as experimental.

Anyhow, using Webpack/Babel or TypeScript you will all be familiar with this format. It is the format that lets you write

So why is this important at all?

If you bundle your ui library in a single CJS file that contains, let's say

and you would import only a single component from your library into your app your whole library would get loaded and bundled. That means even if you only use your button in your app, the entirety of your ui library including the headline, the card and the image would end up in your bundle and make your app sooooo much bigger. Loading time, parsing and execution time would possibly blow up.

...is of course tree-shaking. ES Modules make it possible for bundlers to tree-shake your code. If I am not mistaken, this is because the ESM syntax allows bundlers to statically check which parts of your code are used and which are not, which is harder with require because it can be used in more dynamic ways, like this

There are other approaches to this. Material UI and Ant Design go in a different direction.

Instead of creating a single bundle, that exports all components, they actually create a gazillion tiny bundles, one for each component. So instead of

You will do this

Notice that you load the button from a file (a small bundle) from inside the package /core/Button.

This does work but requires a particular bundling setup and if you're not careful there is a big risk you bundle duplicate code over and over again for each component.

and everything seems to work alright, but this is just a trick. Ant requires you to install babel-plugin-import and use a bonkers setup with create-react-app that requires you to rewire your react-scripts. What this babel plugin does is automatically translate this

The bottom line still is:

None of this is necessary with tree-shaking.

In the end, a setup for this can be simple. For the library I will be using

and to create a complete setup I will be adding

I will put everything in a monorepo. This will help us structure the code and we will have a single project, which is split into separate non-monolithic packages while with hot-module-reload and no manual steps while developing.

if you just want to cut to the chase, the final product can be seen, cloned and forked right here on GitHub:

So to begin we have to create a monorepo. I won't explain every line of the code, feel free to ask me in the comments, I will happily try and answer. Also, I will write this using *nix commands as I am using a mac.

So to create a monorepo I'll be using yarn workspaces with 2 packages, app and ui-library:

You now should have a folder structure like this

Open your project in a code editor and edit your package.json.
Remove the main field and add private: true and workspaces: ["packages/*"] so it looks like this:

You now have a Yarn Workspaces MonoRepo with the packages app and ui-library. cd into packages/ui-library, create a package and add the following dependencies:

Now open the package.json inside packages/ui-library remove the field for main and add the following fields for , scripts, main, module, types, peerDependencies so you package.json looks like this:

in your ui-library folder add a rollup.config.ts and a tsconfig.json

Now here's the part where I will do some explaining, because this really is the heart of it. The rollup config is set up so that it will load and transpile all TypeScript files using the rollup-plugin-typescript2 plugin. As of today, this one is still more suitable than the official @rollup/plugin-typescript because the latter cannot emit TypeScript definition files. Which would mean that our UI Library would not export any types to consumers (boo!). We passed an option to the typescript plugin called useTsconfigDeclarationDir. This one tells the plugin to use the declarationDir option from the tsconfig.json. All other TypeScript options that we have set will already be read from the tsconfig.json. This means we run TypeScript through Rollup, but all TypeScript related settings reside in the tsconfig.json.

What is left to do for rollup is to bundle our files. we could apply anything else a bundler does, like minifying, here too. For now we just create an ES Module, but this setup lets you build on it. Now how do we create an ES Module? For this we have these 2 ouput settings:

This tells rollup to actually create 2 bundles, one in the CJS format, one in ESM. We take the file names for these from the package.json, this way they are always in sync.

Ok, but why the CJS option? I'm glad I pretended you asked. When you consume your library, Node.js and other bundlers will not recognize (i.e. pretend it's not even there) if there is no valid main entry in your package.json and that entry must be in the CJS format. Also, this will give you backwards compatibility, but without tree-shaking capabilities.

The interesting part is the entry for es. We get the files name from the module entry of our package.json. Bundlers like Webpack and Rollup will recognize that entry and when set up properly use it and expect an ES Module behind it (while ignoring the main entry).

Ok well, we do want to test this out. So let's give it a spin:

In your terminal you should still be in the ui-library folder. You can confirm that by entering pwd, which will show you your current working directory.

If you're there enter

That should have created the files

in your project. Edit them as follows

There is a new folder now called lib. In that you have 1 folder and 2 files. open index.esm.js. You should see an ES Module formatted build of your library:

Ok, now we can finally harvest the fruits of our labor. We will create a Next.js app in our monorepo and use our typed, tree-shook library.

So, from your ui-library folder cd into your app folder and create a next app:

Add the Next scripts to your package.json just like you know it from Next:

Now all that is left to do is start your project and see if your button is there:

You should see this now: 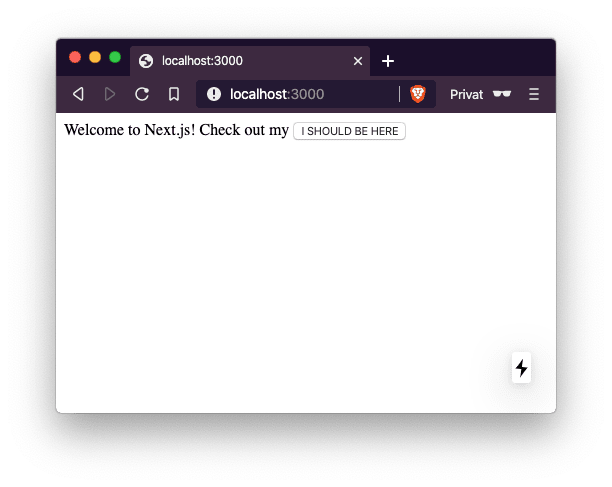 Ok, that was a long ride for a small visible thing. But now you do have a lot:

Hot-Module-Reloading works! If you in parallel do

you can edit your components in your library, they will be watched and rebundled, your Next app will recognize these changes in your monorepo and update automatically too!

If you want to save some time, I have set up a demo project at

Power up your ClickUp skills with Supabase, Figma, and DhiWise in a day.

Yet another Portfolio website written in SvelteKit and Tailwind

Once suspended, lukasbombach will not be able to comment or publish posts until their suspension is removed.

Once unsuspended, lukasbombach will be able to comment and publish posts again.

Once unpublished, all posts by lukasbombach will become hidden and only accessible to themselves.

If lukasbombach is not suspended, they can still re-publish their posts from their dashboard.

Once unpublished, this post will become invisible to the public and only accessible to Lukas Bombach.

Thanks for keeping DEV Community 👩‍💻👨‍💻 safe. Here is what you can do to flag lukasbombach:

Unflagging lukasbombach will restore default visibility to their posts.