Welcome to the second article in our software testing series! The last article explored static, unit, integration, and end-to-end tests.

In this article, we'll explore:

We won't go deep into fake data, stubs, drivers, spies, or any of that. We'll just focus on the mental model around mocking. Everything else can come later.

So, what is mocking?

Mocking is the process of simulating the external dependencies of the code that's being tested. Thus, isolating your code from the multitude of things it depends on.

This "simulation" can come in two forms:

Sure, by providing an actual database connection, we ensure that our test is more "real". But that comes at the expense of complexity and maintainability. Instead, we could just provide a fake database to our function.

That fake database is considered a mocked interaction, because it mocks (fakes) something that our function interacts with.

We also have mocked data, which is fake data used in tests.

For example, the fake database we provided was just so that we could start testing our function. Now that we have all the interactions that our function depends on, we need to actually test it. And how do we do that? By passing inputs and expecting certain outputs.

To pass inputs, we need data. And this doesn't need to be actual data from your real database. We can use mocked (fake) data.

In this example, we create a fake user called Joe with ID 1.

A common concern is when to mock. After all, we could have used an actual database in our tests above. So how can we decide when we should mock?

First, let's take a look at the pros and cons of mocking:

Regarding that last point, it might sound bad that our test passes even though it wouldn't pass with an actual database. I was skeptical about this too, but here's the reasoning: If the database is broken, only the database tests should fail, not the tests that depend on the database.

The advantage of this isolation is debuggability. 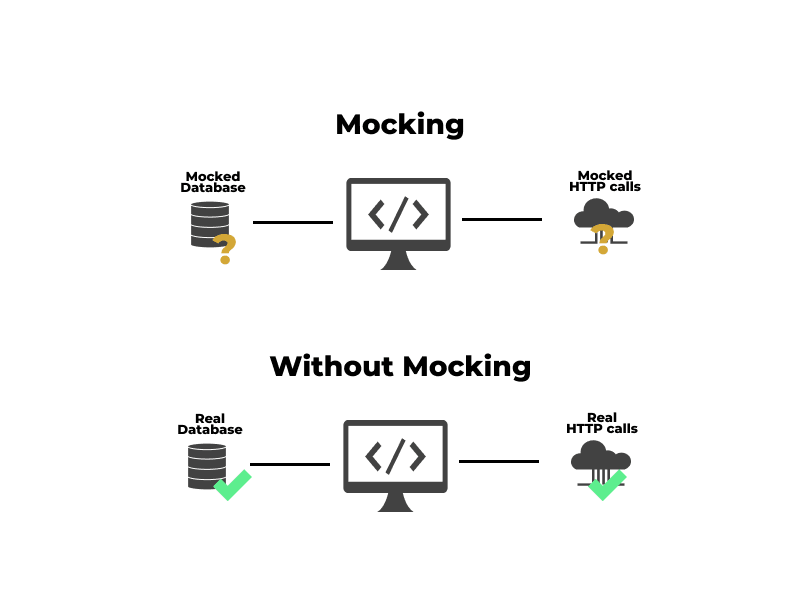 There's no silver bullet. No magic answer. You have to ponder each case individually. How much confidence are you willing to give up?

To me, the answer is none. But I also don't want to give up on all the benefits of mocking. So instead of choosing between:

As mentioned in the previous article, we run all types of tests here.

For immediate feedback, we run unit and integration tests on every file change. These tests must run very fast, so for them, we use mocked data and mocked interactions.

Then, when we open a pull request, our continuous integration pipeline spins up a staging environment where we run our end-to-end tests with fake data but no fake interactions.

That combination makes me confident that my code works when all the test passes.

Now, supposing that you've already decided to use mocks, here are some best practices:

1. Only mock types that you own

External types can change at any time, so don't mock them. Notice that we're talking about types, not actual values. You can totally mock a third-party library. Just don't mock their type signature.

Think about this for a second. Mocking return values of our testing subject doesn't even make sense. Imagine writing tests for a sum() function and mocking it to always return 3. That doesn’t let us know if our function is actually working. 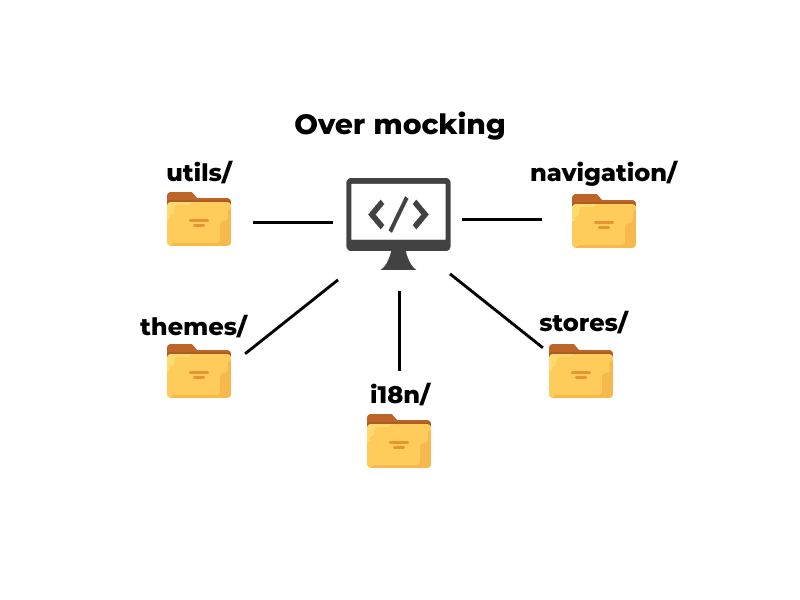 If you care about how your code interacts with other modules, you should do integration testing rather than mocking.

While creating your mocks, don't forget to simulate errors and test error handling. You can even add expectations that some methods or API calls should not be made in case of an error.

That's all for concepts. In the following articles, we'll talk more about fake data and fake interactions.

If you want to dive deeper into software testing, consider subscribing to our newsletter. It's spam-free. We keep the emails few and valuable. If you prefer to watch our content, we also have a YouTube channel that you can subscribe to.

And if your company is looking for remote web developers, consider contacting my team and me. You can do so through email, Twitter, or Instagram.

Have a great day!

Once suspended, lucaspaganini will not be able to comment or publish posts until their suspension is removed.

Once unsuspended, lucaspaganini will be able to comment and publish posts again.

Once unpublished, all posts by lucaspaganini will become hidden and only accessible to themselves.

If lucaspaganini is not suspended, they can still re-publish their posts from their dashboard.

Once unpublished, this post will become invisible to the public and only accessible to Lucas Paganini.

Thanks for keeping DEV Community 👩‍💻👨‍💻 safe. Here is what you can do to flag lucaspaganini:

Unflagging lucaspaganini will restore default visibility to their posts.