CQRS stands for Command and Query Responsibility Segregation, a pattern that separates read and update operations for a data store. Implementing CQRS in your application can maximize its performance, scalability, and security. The flexibility created by migrating to CQRS allows a system to better evolve over time and prevents update commands from causing merge conflicts at the domain level.

In a scalable environment, having several services consuming a single database that serves as a read and write can cause many locks on the data and with that cause several performance problems, as well as the whole process of the business rule that will get the data from display takes extra processing time. In the end, we still have to consider that the displayed data may already be out of date.

This is the starting point of CQRS. Since the displayed information is not necessarily the current information, so obtaining this data for the display does not need to have its performance affected due to recording, possible locks or bank availability.

The division of responsibility for recording and writing conceptually and physically. This means that in addition to having separate ways to record and retrieve data, the databases are also different. Queries are done synchronously on a separate denormalized basis and writes asynchronously on a normalized database. 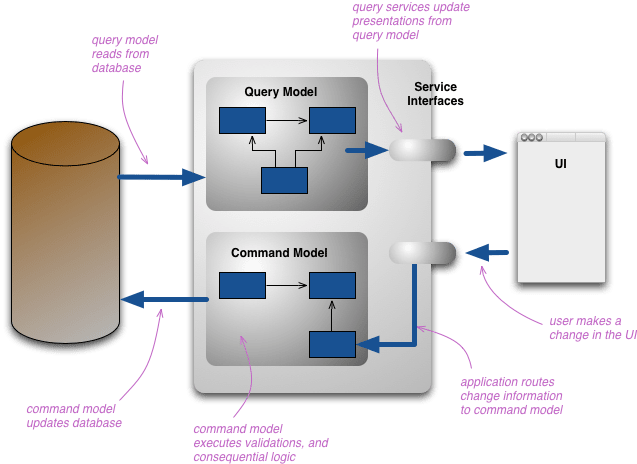 Beginning the explanations, the first moment you need to separate the application responsibility:

Within the concept, Query has the main function of retrieving application data. Often its characteristic is to be synchronous and connected with NoSQL databases. The use of these databases allows faster queries, as we do not have Joins that can burden our performance. With this solution for the data, we assume that we will work with duplicate records.

Following an asynchronous operation, the command has as an operation everything that writes and changes records. A good way is to work with the concept of events, where messages are sent and we have the return of success or failure in the processing of the message.

When to use CQRS

When not to use CQRS

Here is the complete code of the project

The following technologies were used to carry out the project and it is necessary to install some items:

LocalStack is a project open-sourced by Atlassian that provides an easy way to develop AWS cloud applications directly from your localhost. It spins up a testing environment on your local machine that provides almost the same parity functionality and APIs as the real AWS cloud environment, minus the scaling and robustness and a whole lot of magic.

For this solution I made the choice to bring an implementation, Amazon SQS will be used for our event and data synchronization, Amazon DynamoDB to be just our recording database and MongoDB as our NoSQL database (Could also be DocumentDB, but not the same was used, Localstack does not support that database in their services).

Now with MongoDB running, we are going to raise our AWS stack, for that we will go to the localstack directory, in the directory we have the docker-compose.yaml file, which has a similar structure to the previous file.

With this docker-compose we will upload our Message Broker, Amazon SQS and our Write-Only database, DynamoDB.

Within the framework of the environment, in docker-compose, we specify which services we want to make available. To do this, we run the following command:

Now that we have our infrastructure available, we will show our technical drawing for our application. 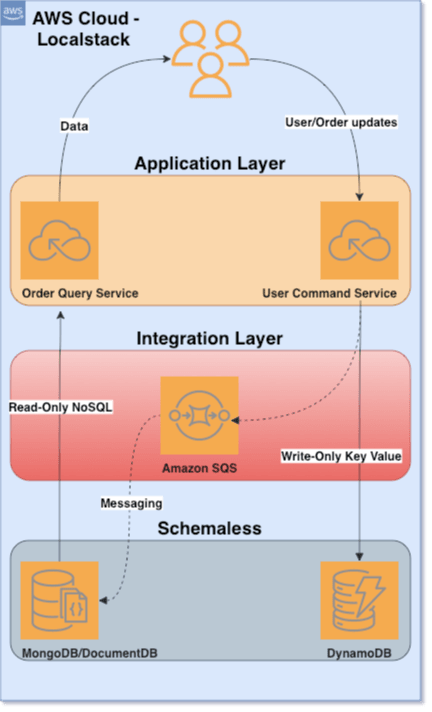 After we have our services all available. We will configure our local AWS stack. For this, you will need to enter the terminal of your localstack container, for this, execute the following command:

Once you access the localstack container terminal, you will need to configure: accessKey, secretKey, region and the output format. Our configuration looked like this:

after configuration, we will create our queue inside SQS and our table in Dynamo DB:

After configuration, we can run our application and check our CQRS implementation with Aws localstack.