It was about time to create a functional version of the Obfuscated C Donut.

The C Donut is a 15-year-old creation by Andy Sloane that renders a rotating three-dimensional donut in a terminal using characters.

I rewrote it using Elm.

Elm is a purely functional language to create web applications. It compiles into JavaScript.

As per tradition, I also made an obfuscated version shaped like a donut.

You can see it in action here 🍩 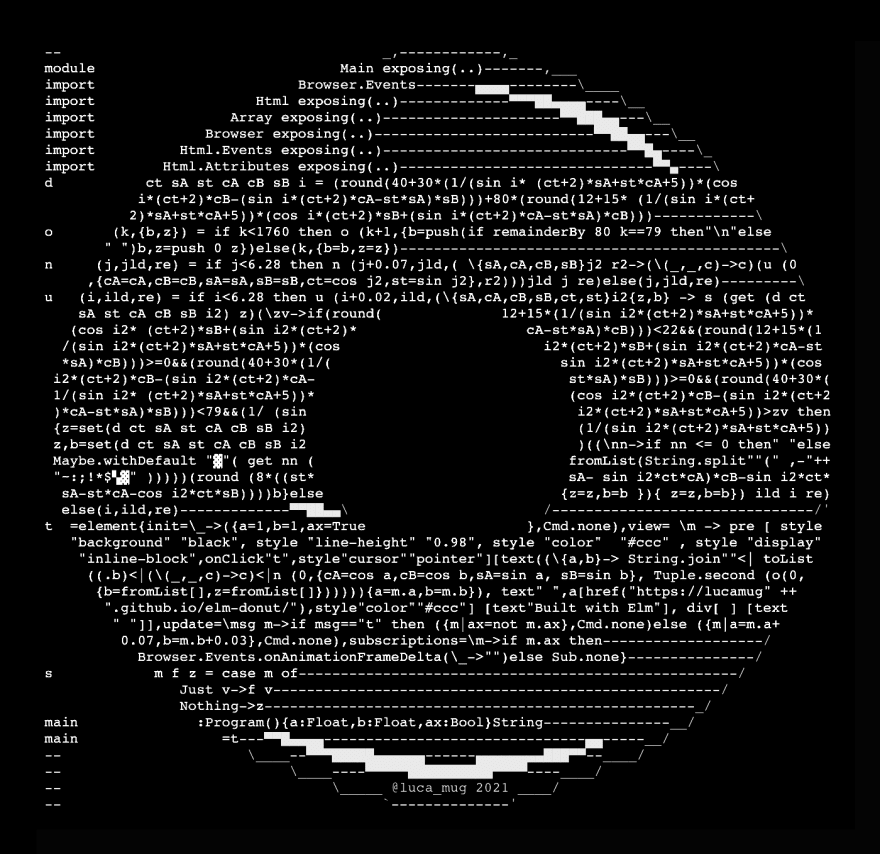 In the rest of the post, I will refer to the un-obfuscated version of the code (Source, Demo, Ellie) that doesn't have the donut shape but use the same logic.

The un-obfuscated version has some extra features:

In this post, I will explain how I converted this script to Elm. If you are interested instead in the math of the script, refer to Donut math: how donut.c works by the original author, where these concepts are explained very well.

I created the Elm version converting the JavaScript version of the donut.

The script itself is not that complicated, but it is very imperative. It uses mutability and loops.

How can we convert it into a purely functional language? But foremost...

What is a purely functional language?

A purely functional language, like Elm, is a language that supports and motivates programming with controlled side effects.

Usually, this comes with immutable data and pure functions. Pure functions return the same output for the same input and cannot have any side effects.

If the data is immutable, how can we have for-loops, where typically the counter i mutate at each iteration?

Imperative loops can be converted to functional code in several ways, depending on the type of the loop. If the loop involves the items of an array, for example, functions like map or fold can be helpful. In other cases, we reach for recursion. 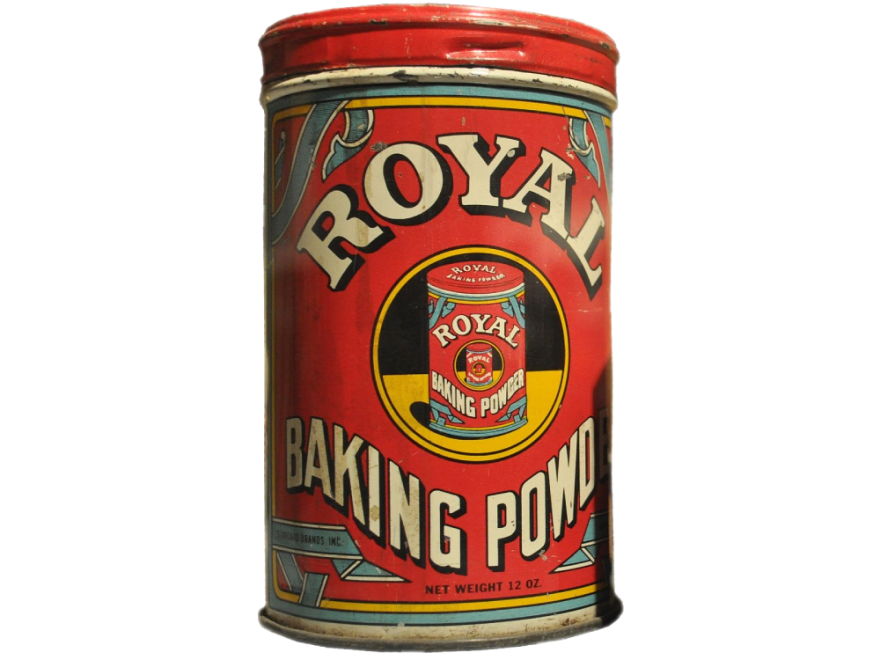 The label of this baking powder can, an important ingredient in donuts, is an example of recursion. Photo by Joe Mabel.

Because there are several loops in the original code, let's build a declarative function that is implementing the loop logic. After that, every time we need a loop, it will be enough to call this function with the proper details.

A generic loop in this script needs:

And will return a donut.

Let's translate this into a type annotation:

..and this is its implementation, the heart of our script that will take care of all our loops:

Now that we have this utility function we can convert the JavaScript. Let's start, for example, with this one:

It may seem that we created some unnecessary boilerplate compared to the JavaScript loop, but at the same time this form is more declarative and we don't need to write the logic of the loop over and over, we just pass the details about how the loop should be.

Ok, this is all nice and well, but what happens if we iterate too many times, don't we risk a stack overflow error?

Yes, we do, but the Elm compiler is smart enough to convert a recursive call to a function back to a simple loop. (Note that this may not happen if certain requirements are not met).

Out of curiosity, this is an approximation of how Elm compiles the recursive loop function described above into JavaScript.

To JavaScript (by the Elm compiler):

At the end of the day, we are going back to a code that is similar to the original JavaScript, without recursion, and with mutability.

This technique is called Tail-call optimization.

Elm is like a level of abstraction above JavaScript where all functions are pure, data is immutable, types are correct, and runtime exceptions don’t exist. Pretty neat!

The rest of the conversion is trivial at this point. Just one to one coversion. For example, from Javascript:

Other places requires small changes, for example this construct in JavaScript

Is changing both z and b arrays in place. This mutability is not allowed in Elm. Moreover Elm always requires an else block, so this will be converted into:

The main function that create a donut frame is now reduced to:

Note that there are type annotations throughout the code, but in Elm these are optional. The compiler is able to infer correctly all the types without annotations. The reason we add them is for better readability of the code, and also to help the compiler to give more meaningful error messages.

In the Elm version I added a cache system, so after a few seconds, once all the 200 initial donut positions are calculated, the animation proceeds with a smaller usage of resources (see the graph below).

While the cache is generated, each frame is rendered well under 16 milliseconds, assuring a smooth animation at 60 frames per second on most recent devices.

After the cache is generated, the CPU is mainly used to update the DOM 60 times per second.

I tried to follow as closely as possible the original JavaScript code, I am sure that there are better ways to convert this script.

For such a small piece of code, it was just a style exercise. But also in this small example, I think it is interesting to see how a safe environment where all functions are pure and all data is immutable makes the code different, more explicit if you want.

This has an impact on maintainability and expandability in the long run, especially on larger projects.

I hope you enjoyed the post. Let me know your thoughts and if you have a more functional way to convert the script, add it in the comments below.

Once suspended, lucamug will not be able to comment or publish posts until their suspension is removed.

Once unsuspended, lucamug will be able to comment and publish posts again.

Once unpublished, all posts by lucamug will become hidden and only accessible to themselves.

If lucamug is not suspended, they can still re-publish their posts from their dashboard.

Once unpublished, this post will become invisible to the public and only accessible to lucamug.

Thanks for keeping DEV Community safe. Here is what you can do to flag lucamug:

Unflagging lucamug will restore default visibility to their posts.