This tutorial was originally posted here

From 0 to blog in under 5 minutes

Docker can be an amazing tool for deploying and managing applications, and can streamline many tasks that used to be tedious and time-consuming. This tutorial will show you how to use set up docker in your local environment to develop a blog application. For this tutorial we will be using Ghost as our blog application. Ghost is a free, open-source, and easy-to-use blogging platform with powerful features like real-time search, RSS, and email notifications.

First, we need to install Docker on our local machine. If you don't have docker installed, you can install it with the following command:

Lets break this down a little.

The These commands are necessary to ensure that the system is up to date before installing docker.

The convenience script automatically installs the latest version of docker compatible with your system. To verify that everything went smoothly, we can run the following command:

This command will try to find the hello-world image locally, if it is unable to do so, the image will be pulled from docker hub. Once the image has completed downloading, the hello-world program will run, printing the following to the terminal:

Success! Docker is installed and running.

Now that Docker is up and running, we're ready to install our blogging platform. This is where docker really shines, as the install can be as simple as running a single command and utilizing the built-in SQLite database. For larger applications, it is recommended to use a database like MySQL or PostgreSQL, which will allow you to store data in a more robust, secure, and scalable way. For this demonstration, we'll be sticking with SQLite. To get started we'll run the following command:

In this command there are quite a few flags, so we'll go over each in more detail.

We're also specifying an alpine image, which is a lightweight, minimalistic image that is optimized for running Ghost. Once the image has been pulled, it will begin running in the background. You can confirm this with the following command:

after which you should see the following output:

At this point, you can access your blog at http://localhost:2368. If you've never used Ghost before, you'll need to create a new user by visiting http://localhost:2368/ghost and clicking "Create your account". Once you've created your own account, you'll be able return to http://localhost:2368/ghost and log in to the dashboard. To clear out the sample data, you'll need to delete the user "Ghost". To do this, click the cog icon on the bottom left of the page and select "Staff". Select the user "Ghost" and click the cog icon on the top right of the page, then click "Delete User". You'll be prompted to confirm the deletion. Once you've confirmed, you'll have cleared out the sample data and now have a fresh slate to work with! 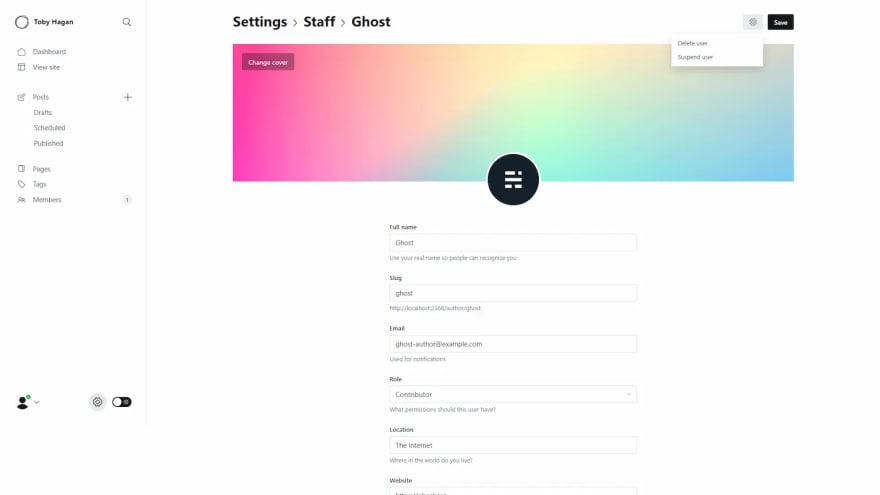 Once you are satisfied with the test post, go ahead and stop the docker image by running the following command:

then restart it with the following command:

and visit http://localhost:2368/ to see your post. You should be greeted with the test post you created in the previous step. If your post is still there, you've successfully installed Ghost and are ready to go! 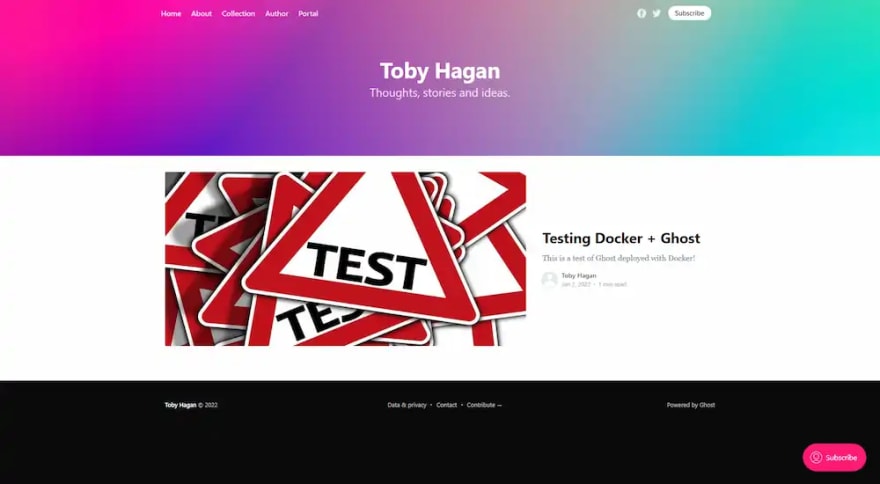 If you'd like to learn more about Ghost, check out the official documentation, or the community forum.

Github OIDC with terraform and Azure

The Best Ways to Improve Your Skills to become a Developer

Once suspended, lrth06 will not be able to comment or publish posts until their suspension is removed.

Once unsuspended, lrth06 will be able to comment and publish posts again.

Once unpublished, all posts by lrth06 will become hidden and only accessible to themselves.

If lrth06 is not suspended, they can still re-publish their posts from their dashboard.

Once unpublished, this post will become invisible to the public and only accessible to lrth06.