This post was first published on CoderHood as Product Vision, Agile, and Going to the Moon. CoderHood is a blog dedicated to the human dimension of software engineering.

Vision:\
(noun)\
a vivid mental image, especially a fanciful one of the future.

Everyone who lived before witnessing the Apollo 11 mission on July 20th, 1969, could only dream of touching the Moon. In 1865, Jules Verne, a French novelist, had that dream in the form of a novel that he titled "From the Earth to the Moon." He told a story of a group of gun enthusiasts and their attempts to build an enormous space gun to launch three people to the Moon.

It took 104 more years for humanity to find a way to realize that dream. When it happened, it was one of humanity's proudest achievements; a glorious moment that required an immense amount of planning and work.

Many small and significant scientific milestones needed to be realized before we could take that one enormous step. First, in 1609, Galileo discovered that the Moon was a world. That discovery was necessary for us to imagine that going to it was even a possibility. In 1687 Isaac Newton reasoned that a cannon powerful enough could put a shell in orbit. If the round were fired even faster, it would leave earth and go into space. In 1903 the Russian scientist Konstantin Tsiolkovsky defined the Rocket Equation, a mathematical basis for space propulsion. The list goes on and on.

Each milestone by itself wasn't enough to get us to the destination but combined created the necessary critical mass.

The vision that propelled us forward was simple: to put a human on the Moon. The engineering vision was more complicated, but still clear: to build the technology necessary to carry humans to space, keep them healthy, deposit them on the Moon, and bring them back to earth alive. That last part was a significant complication.

Agile and Vision Are Not Enemies

I admit it; space missions and software products are very different things. However, they do have commonalities. They both consist of complex engineering challenges that need to be overcome to reach a goal.

The Apollo 11 mission was planned and driven mainly using waterfall processes. That's how we engineered most things at the time. Today, many engineering problems are approached in a more "agile" way. The agile manifesto lays the foundation for that way of thinking:

Operating according to the manifesto is common in the software industry. Unfortunately, the manifesto is very vague and open to interpretation, and it is usually misinterpreted. The 12 principles of agile spell out that philosophy in greater detail, but still they leave (by design) much to the imagination:

There is no mention of product vision or engineering vision in either the manifesto or the principles. It more or less says that the vision needs to be realized in small functional releases and that plans can and will change along the way.

Unfortunately, agile is often confused with "starting to do stuff without a plan." That is a fallacy that causes huge problems. The manifesto and the principles do not say that you should start writing code without having any idea where the product is going. In fact, beginning with a clear vision is a fundamental of "Agile Project Management 101," but it is also an often forgotten first step.

Taking the first step that comes to mind toward a goal is not the right approach, as it leads to many false starts and wrong paths. Let me give you an example.

Going to The Moon

Let's say that the Apollo 11 mission didn't happen and that your goal is to travel to the Moon for the first time. The "product vision" is the idea of an astronaut planting a flag on the Moon. That is what you want to achieve, or the "what." It is a vision because you can see it in your head. From that idea, you need to imagine how you are going to achieve it; I call that an engineering vision.

In an agile world, you might be tempted to make quick progress by rushing to take the very first action that comes to mind that brings you closer to achieving your goals. For example, you could start by walking in the general direction of the Moon. That might seem like a great thing to do as it gets you closer to the destination. However, while walking in the right direction reduces the physical distance between you and the Moon, it has no chance of success because you cannot walk to space.

Walking is a misguided first step toward a dead-end. Taking a bunch of first steps toward dead-ends is not being agile; it is just lacking the ability or desire to imagine how you are going to reach your goals. In other words, it is lack of vision. 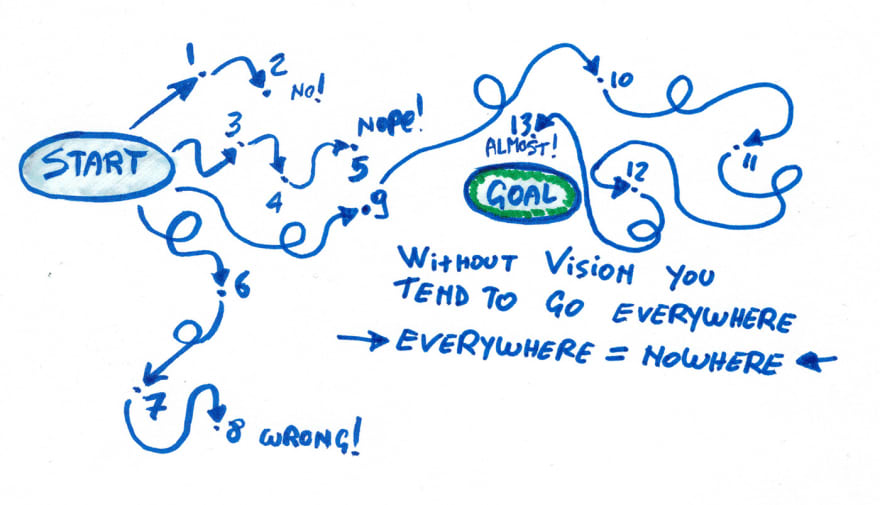 A better first step is to think what it would take to get to the Moon. Imagining how you could do it, even without knowing the details, is the engineering vision that you need to have to reach the goal. That vision keeps you focused. For example, if you envision having to build a rocket, the next steps you take are going to be focused on that concrete goal. 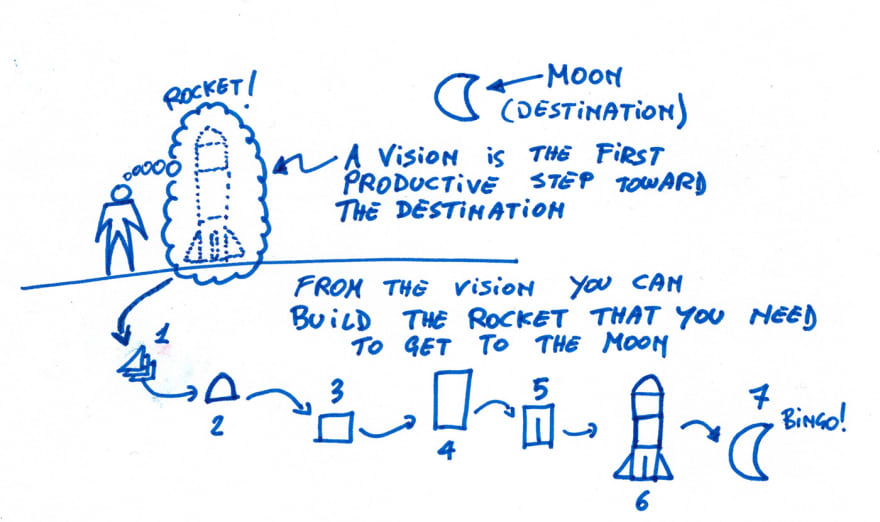 With the focus on a rocket (engineering vision), you can take steps that have a chance to get you to the destination.

That vision is critical. If you envision the wrong thing (for example, walking to the moon), you are going to focus on taking steps in the wrong direction. That is where the agile philosophy comes into play. Applying agile methodologies once you have a vision, you achieve functional intermediate steps while keeping evaluating the course and the overall strategy along the way. 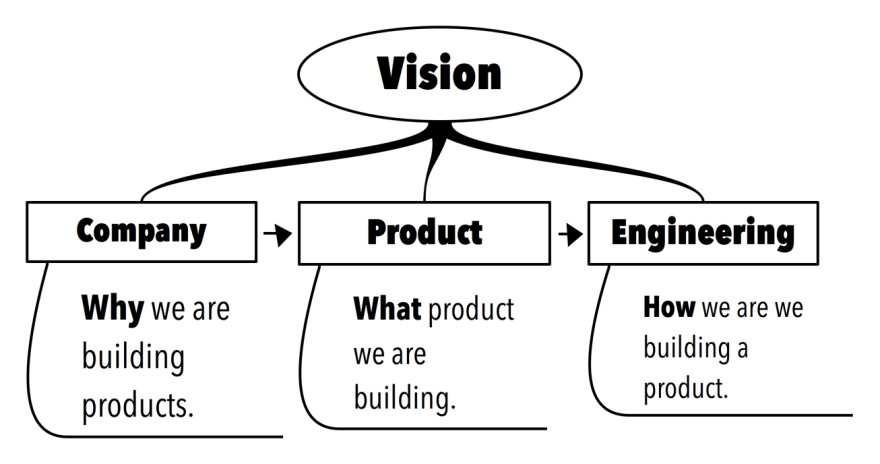 Together these three levels of vision give the entire narrative of a product. Having that narrative is necessary to describe the reality of the world after the product is built.

Where Are Marketing and Sales in This Picture?

If you don't know how you are going to market or sell a product (at least at a high-level), the product is going to struggle. Look at how long it took for Twitter to figure out how to monetize their services. For that reason, marketing and sales strategies should be part of the Product Vision.

To expand on the MindMap above: 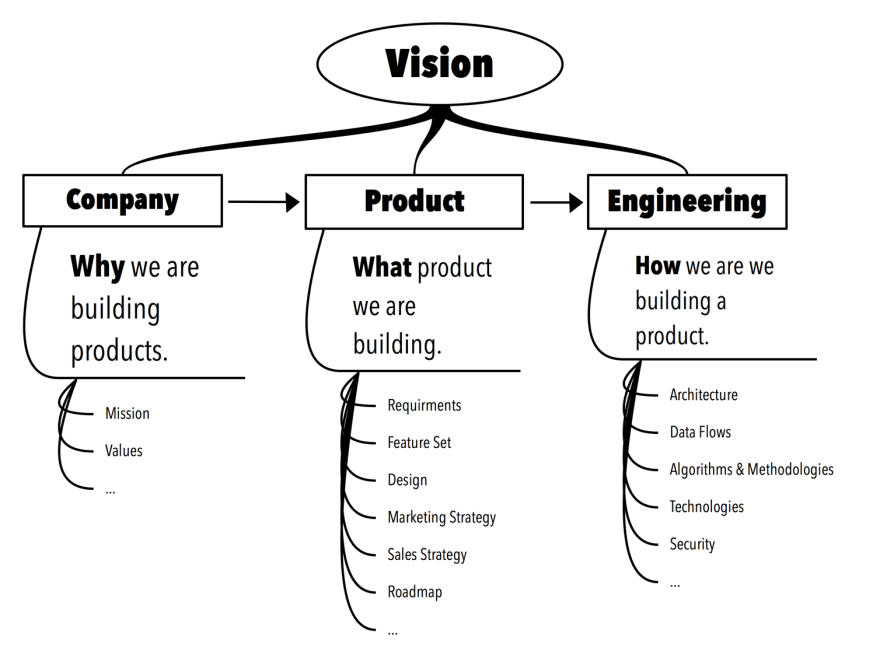 To make this more concrete, at Amazon the vision of a product starts from a mock press-release. That forces product managers to think about all customer-facing facets of a product from the very beginning. Thinking about market and sale realities has profound implications on product design, and the product design has broad consequences on engineering direction.

Agile methodologies have influenced the way software is built, but have also been applied in naive ways. Their goal is to eliminate unnecessary and costly over-formalizations to enable developers to make progress without having to spell out all the details ahead of time. That should not be confused with sloppily taking a step in a direction that appears somewhat right.

Agile methodologies should not be an excuse to attempt to achieve results without planning or without knowing what we want to build or how we are going to do it. A clear product vision is still critical. Small-batch vision and incremental vision are both oxymorons.

The Agile Leader: Lessons to learn from the Alpha Chimps

Lorenzo Pasqualis
I started writing software in 1984. Over the years I worked with many languages, technologies, and tools. I have been in leadership positions since the early 2000s, and in executive roles since 2014.
Software Maintenance, Understanding the 4 Types
#advice #leadership #maintenance
Avoid Design by Committee: Generate Apart, Evaluate Together
#design #advice #leadership #teamwork
5 Reasons Why I Love Being Wrong
#career #advice #leadership

Once suspended, lpasqualis will not be able to comment or publish posts until their suspension is removed.

Once unsuspended, lpasqualis will be able to comment and publish posts again.

Once unpublished, all posts by lpasqualis will become hidden and only accessible to themselves.

If lpasqualis is not suspended, they can still re-publish their posts from their dashboard.

Once unpublished, this post will become invisible to the public and only accessible to Lorenzo Pasqualis.

Thanks for keeping DEV Community safe. Here is what you can do to flag lpasqualis:

Unflagging lpasqualis will restore default visibility to their posts.