When interacting with web3 apps, you may have seen a signature request in your wallet that looks like this. This article explains what this signature is and how it's used as authentication. 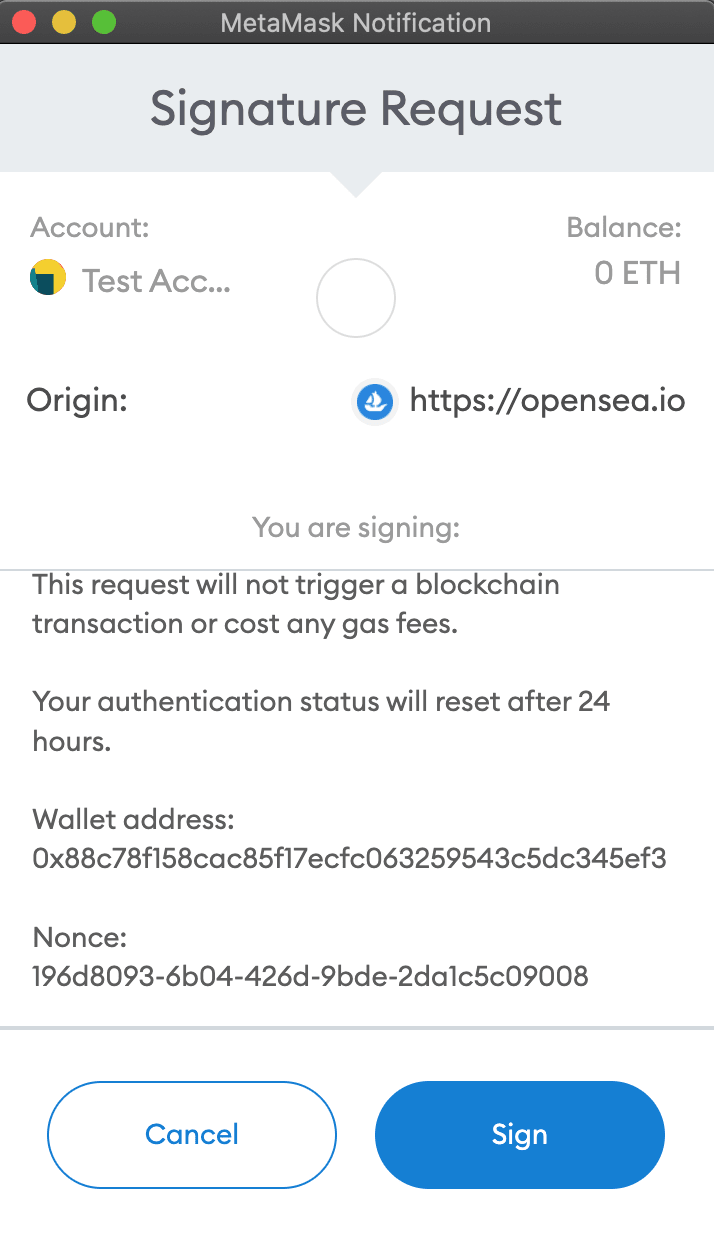 What is a signature and what does it prove?

Ethereum wallets, such as MetaMask and Coinbase Wallet, store your public key and private key for you, and protect against apps directly accessing the private key. Instead, apps rely on a cryptographic signature that proves ownership of the address through the Elliptic Curve Digital Signature Algorithm, which allows any external party to verify the signature without knowing the private key.

Benefits of using a signature for authentication

In web3 apps, a user's Ethereum address is increasingly replacing a username or email to identify a user. And instead of a password to authenticate that a user controls the digital identity, a signature can be used.

Leveraging an existing Ethereum account is a lightweight way to onboard web3 users. It's faster than traditional account creation flows, and doesn't require the user to create and store yet another password. It also allows the user more anonymity, since they don't have to reveal private details like their email.

How signatures are used in hybrid apps

Some apps, such as Snapshot and OpenSea use a hybrid of blockchain data and data from a private database. These apps will use a traditional database to store off-chain actions, such as voting (on Snapshot proposals) or favoriting NFTs (OpenSea stores users' favorited NFTs). Onboarding onto these apps is easy, because a user just has to allow it to connect to their Ethereum wallet. But to store the outcome of these actions, or any off-chain details about the user (such as profile name and photo), these apps must authenticate the user's digital identity.

For example, to change an OpenSea profile's details, the user must authenticate to prove they control this address. 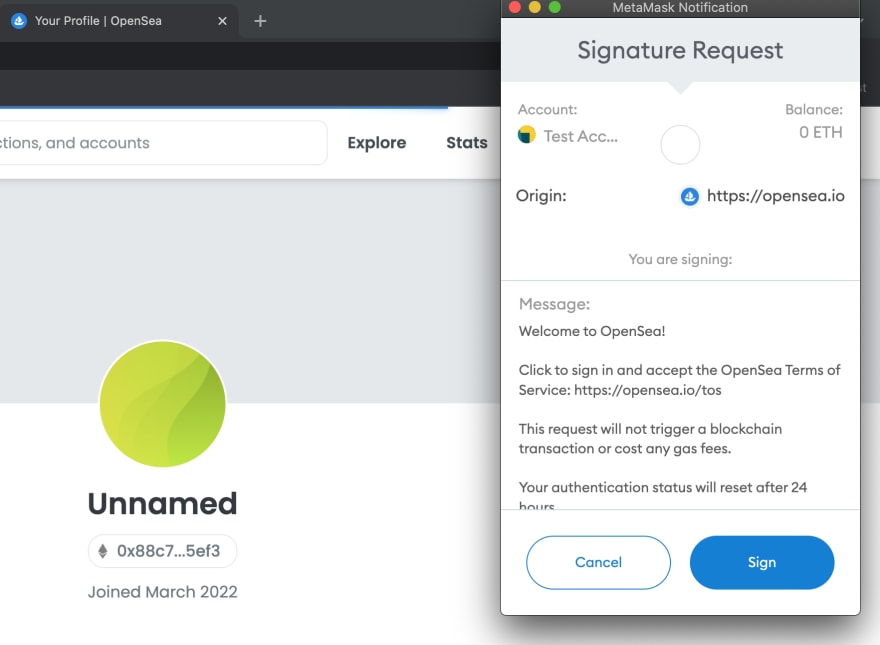 For apps using signature authentication, it's important not to allow the same signature to be used twice. This is why the messages vary, and often include a nonce.

How to generate and verify signatures

To sign or verify a signature right now, you can use Etherscan's Verified Signature tool. 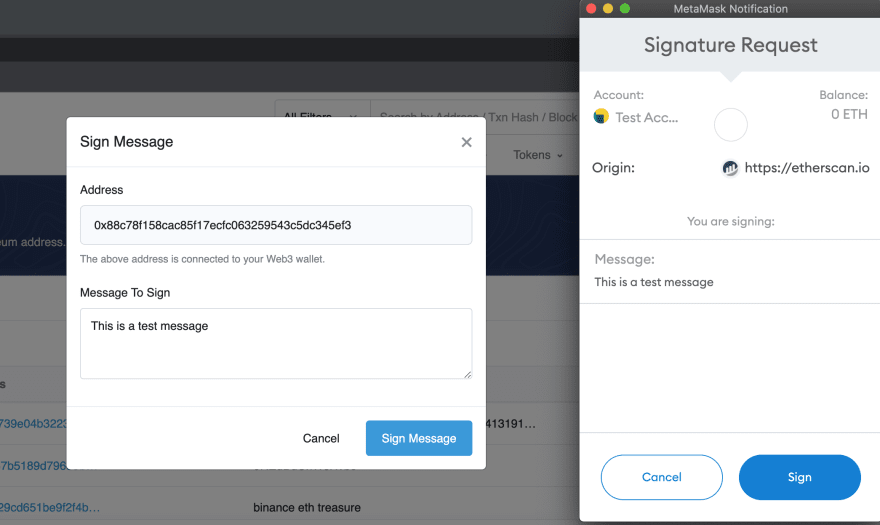 Connect a wallet and enter any message. Those two inputs, plus your private key, generate a unique hash. 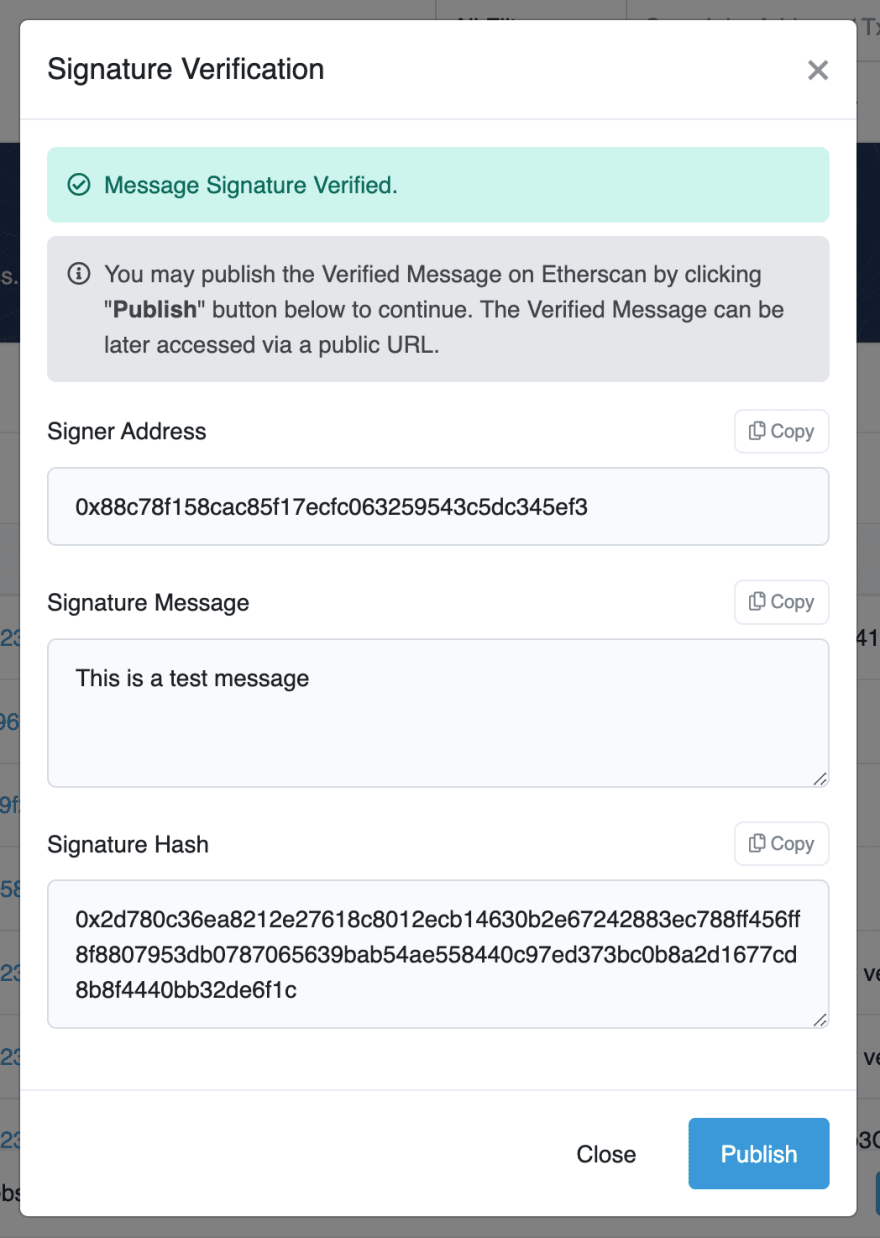 To verify this signature came from the wallet's owner, another party can input the signature hash, along with the address and message to validate.

In your frontend app

To request a signature in your web3 app, you can use a library like web3.js on the frontend. The code snippet below shows how to generate a signatureHash using a web3.js method, then an example of passing it to any signature verification API to your backend.

As the Ethereum address has replaced the account username, the signature has replaced the password. Because a cryptographic signature proves the user controls the private key to the public address, it is a secure method of authentication. Apps can use this gas-less primitive of Ethereum to verify a user has control over the digital identity provided by the address, and provide authentication to do arbitrary, non-web3 actions.

Not Only STEPN: Top-5 Move-to-Earn Projects (And Tokens!) That Change The Narrative in Web3

Once suspended, lparvinsmith will not be able to comment or publish posts until their suspension is removed.

Once unsuspended, lparvinsmith will be able to comment and publish posts again.

Once unpublished, all posts by lparvinsmith will become hidden and only accessible to themselves.

If lparvinsmith is not suspended, they can still re-publish their posts from their dashboard.

Once unpublished, this post will become invisible to the public and only accessible to Lara Parvinsmith.

Thanks for keeping DEV Community safe. Here is what you can do to flag lparvinsmith:

Unflagging lparvinsmith will restore default visibility to their posts.