I have been looking up to Hillel for his great work introducing me and more people into the world of formal specification and verification. Recently he has published yet another great project, Alloydoc:

You can read the announcement here: hillelwayne.com/post/alloydocs/

Congratulations to Hillel! And to all of us fans. In accord with the advice given in his announcement, I started with the tutorial, during which I decided to have a bit more fun.

I downloaded Alloy from the official source, and typed in the first part of the first code sample, about a file system:

Here we have four signatures and two facts. Signatures are hopefully obvious: they define sets of objects with fields. If you come from OO world, replace sig with class.

Fact is also often called "invariant" in academic speak. It is a property of the system which must be true at all times. On one hand, you can take the facts for granted when you add new features; on the other hand, you have to be careful not to break the system by breaking the facts. In most languages the compiler cannot reason about the facts, so they are only documented, leaving it for programmers to enforce. Alloy is made to reason about the facts, so we tell Alloy them.

The one and { no parent } in the signature of Root are short-hands to state facts associated with only one signature. one means there is only one Root (singleton), while no parent means the Root has no parent. Straightforward enough I hope.

There were more facts in the tutorial, but I wanted to see what happens if I turn some of them into assert. An assertion is a property which emerges from the signatures and facts. It also must be true for the system to work, but it is like the property of a finished cake, while the facts are like the properties of flour and cream.

The fact in the tutorial is:

Am I right? No! The check gives me the result:

The Counterexample is a link in the analyzer app, and clicking it opens a nice visualization of the counter example. 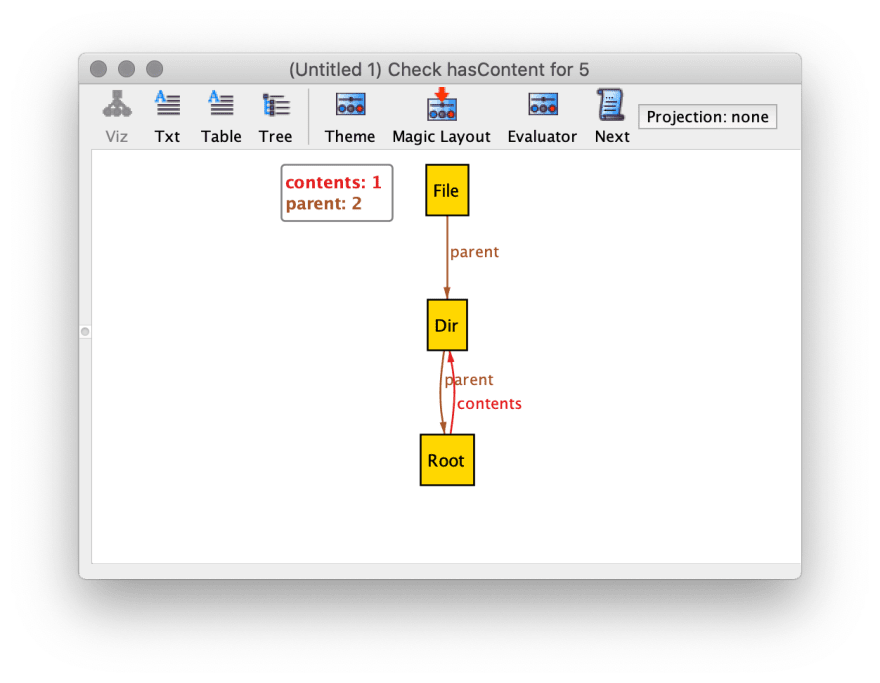 File has parent Dir, but Dir doesn't have content File. Dir has parent Root, Root has content Dir. File is FSObject but is not under Root.content chain, so it makes the assertion wrong.

What if I add the fact that all FSObject is in the contents of its parent? 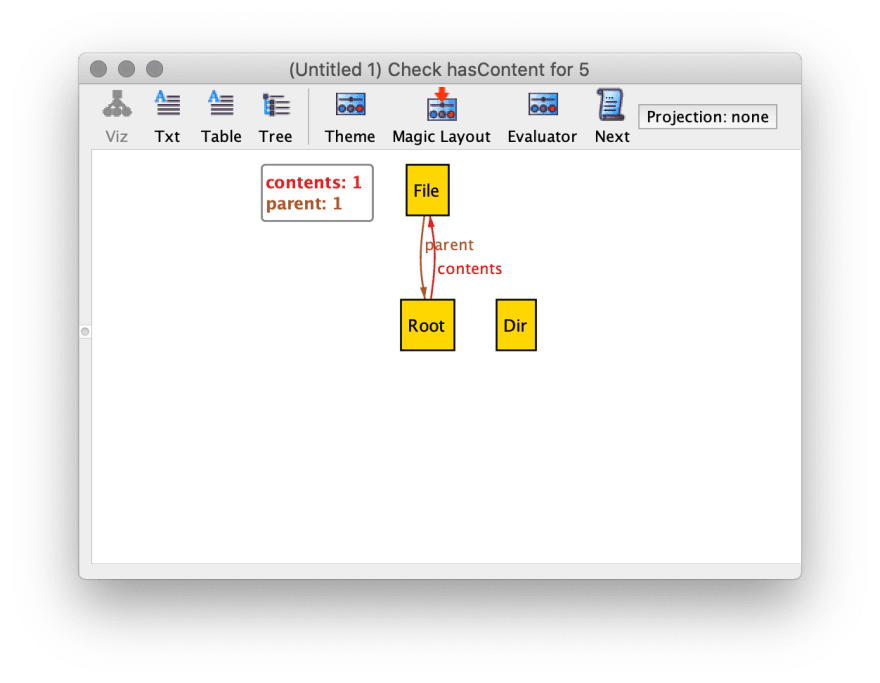 File has parent Root, and Root has contents File. But Dir is besides them, not contents of anything, so it makes the assertion wrong.

In hindsight the counter examples are really simple, but before checking I did not catch them.

Alloy is really fun! Modeling in it aligns very well with traditional Object-Oriented concepts as well as relational database concepts. It is great for revealing those false assumptions you hold unconsciously. A logic debugger, if I may. Debug your logic with it when you are stuck!

Thanks for keeping DEV Community 👩‍💻👨‍💻 safe. Here is what you can do to flag louy2:

Unflagging louy2 will restore default visibility to their posts.