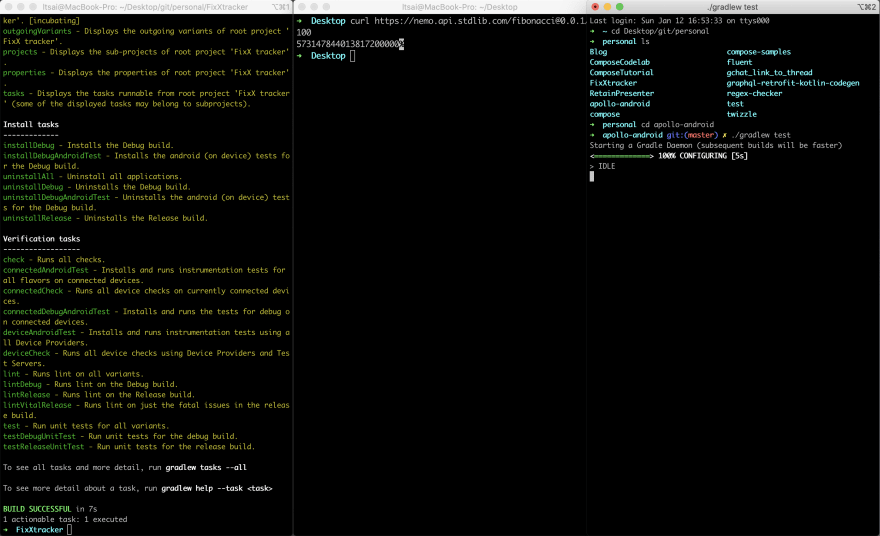 It has been a while since I did my last "From Android zero to kinda-middle" series, and today I'd like to talk about shell script.

You can think of it as a scripting language + the program that interprets it.

Why you should know shell script?

All the buttons in Android Studio will ended up executing some shell script in one way or another. For example,

But if all of the task can be done with buttons, why would anyone want to type all the steps out instead? Well, if you have a series of events you want to run repetitvely, having a script will often makes it a lot easier to deal with, esp. when compare to reading documentation and do it step-by-step. And those automated task can also be done by computers more accurately, for example, have a computer that builds and ship the app every time master branch is updated. And that is basically what "Continuous Integration" or "Continuous Delivery" (also known as CI/CD) are.

But this only explains half of the question. What makes shell script different than, let say JavaScript? Well, it's all about the history. Shell script is very much tied to Unix, i.e. the foundation of Linux and macOS, and the popularity of the 2 (amongst developers and servers) makes it pretty much the universal way to tell a computer how to do something. Not only that, being super close to the operating system, it allows a multitude of tools to do whatever they want to do, from transforming video between formats, framerate, resolutions, and more with ffmpeg, to compiling Java/Kotlin code with javac/kotlinc, to tools that communicate with external sources or devices like curl or adb.

What can shell script do

How to run shell script

If you are on Windows, I'm sorry but 50% of this article is not for you. While the concept is the same, they are so fundamentally different, that you should be using something call "Command Line" or "PowerShell". These are 2 different program + scripting language that runs on Windows, and I have little to no knowledge about them. A quick Google will help you a lot more. And if you are brave enough, you can also try out WSL (and WSL2) to run the following steps. Not everything will work.

Now that Windows users are out of the way, let see some basic commands on Linux or macOS!

And now, let's try to create a new git repository, and then delete it

All the line starts with # are short comments that explains what the command does. And feel free to mix and match all of these, or just randomly roll around and try things out. But be careful, you don't want to mess up your computer.

On Linux, there are a lot of "Package Manager", and in this case we will use Debian/Ubuntu as an example, which uses apt-get, and that is includes when you install the OS.

And on macOS, the most popular package manager is call "homebrew", and first, you will need to install it. At the time of writing (Jan 2020), you just need to run

ktlint is a tool that verifies and fixes kotlin code. And git hook is basically a script that runs in specific time in the git process, in this case, pre-commit will run when you are trying to commit, and if it failes, the commit also fails, which makes it a great place for enforce coding style in a team.

You probably already know the existance of Gradle (via build.gradle), and fastlane is a tool that can automate a lot of stuff for Android and iOS developers. Instead of writing all the steps here, please checkout the official documentation on how to install and publish to Play Store, and this article from GitLab on how to compile and run fastlane on Linux

I still remember when I start learning/using shell script from about a year ago, and I was like "Ugh really? It's 2019 and I am going back to using computer like the 70s?". But after a while, I realised the flexibility of it opens a lot of doors. It did took a while for me to understand some basic shell script syntax, but I promise you at some point you will file some usecases that shell script will make you life as an Android developer a lot easier to deal with! Thank you for reading, and I will see you next time!

Building networks from A to Z - Part 1 : the basics

Why I chose to be a Software Engineer