Qt is a cross-platform toolkit for creating applications with a graphical user interface (GUI). This framework is available under commercial and open-source licences and provides the programmer with many programming tools and pre-made GUI elements that are easy to use.

Qt is commonly used not only for desktops but also for mobile application development.

See the full repository for this article at GitHub.

Qt can be installed by directly downloading the package from Qt website. It is also available in the commonly used Linux package repositories. The main development tool provided in the Qt toolkit is called Qt Creator. It contains a code and GUI editor and various tools that are making the whole compilation process fairly simple and easy to debug.

After opening Qt Creator, let’s create a new project (File - New File or Project) and select, for example, the Swipe template which is suitable for mobile development.

For now, let’s leave all project settings at default values. If you have configured kits for Android development or other target platforms, you can enable them or do so later. It is also possible to enable the translation right away in the initial project settings wizard, but we will add it later manually to cover the whole process since someone might want to add the translations into an already existing project.

The main qml file already contains some strings in qsTr() function. Instead of writing the string directly in the property, it is passed as a parameter to the function that translates it according to the active language. Even the original strings, however, might change. A good practice to avoid problems in such cases is to use IDs instead of the source language strings. Let’s use qsTrId() instead of the qsTr() function. The string parameters should be unique IDs of the strings. Note that commonly used strings might have the same IDs.

It is a good practice to follow the same pattern when creating the IDs to be able to easily identify where does the given string belong. The edited files with the compiled application might then look like this: 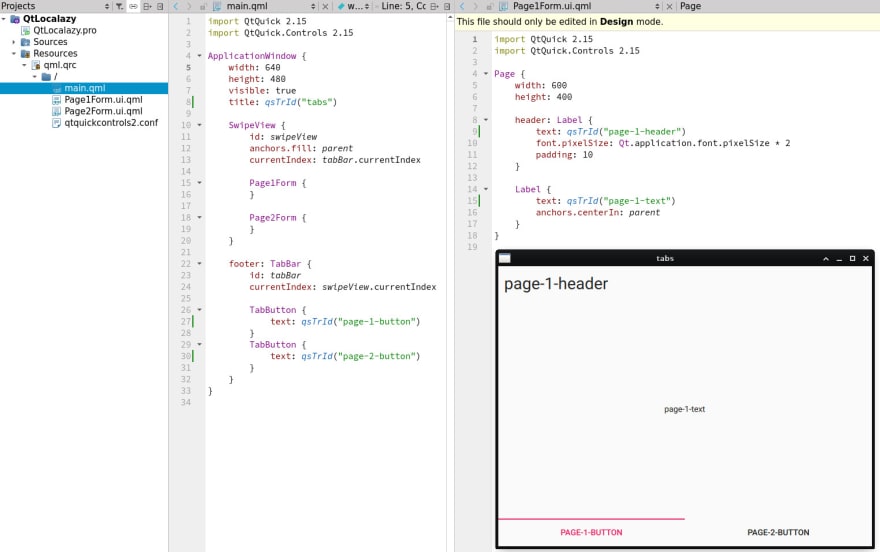 The external tool lupdate generates the translation files and updates them in case of changes. The files can be added to the project by right clicking the qml.qrc file and adding the existing translations directory. The files should then appear in the project file tree.

The .ts files are in XML format where each translation ID has one message element. Moreover, don’t forget to define the language of the file in the header part. Here is an example of one finished and one unfinished translation:

A new QTranslator object has to be created, loaded, and installed. Here is the edited main.cpp file:

Hmm .qm file? Do we have that in our project? Not yet! The .qm files are the compiled translations that are used in the application. They can be generated in the same way as when generating the .ts files.

If you are not using the ID-based approach, then instead of Update Translations (lupdate) use the Release Translations (lrelease) button. The lrelease tool, however, needs an additional parameter in case of IDs present in the project -idbased. A simple script or command can be executed from the translations directory:

The correct path to the Qt installation has to be used to find the lrelease tool. Again, add the newly generated .qm files in the project. Now simply hit the Run button, compile the project and… it’s translated!

Create Localazy account and install or download the CLI tool. In My Apps section in the Localazy web interface hit the Add new App button, fill the name, and select the source language (English in our case).

Then go to the App settings and get the read and write access keys. The process of managing the translations is quite simple. Simply create a new directory in the translations one (to avoid unwanted overwriting of the translations) and add the configuration file according to the docs.

Then call the localazy upload command:

The translation should be present in the Localazy engine now as the source language.

After hitting the Add language button and creating a new translation (Czech in our example). Simply call the CLI again:

Compile the translations again (lrelease) and run the application: 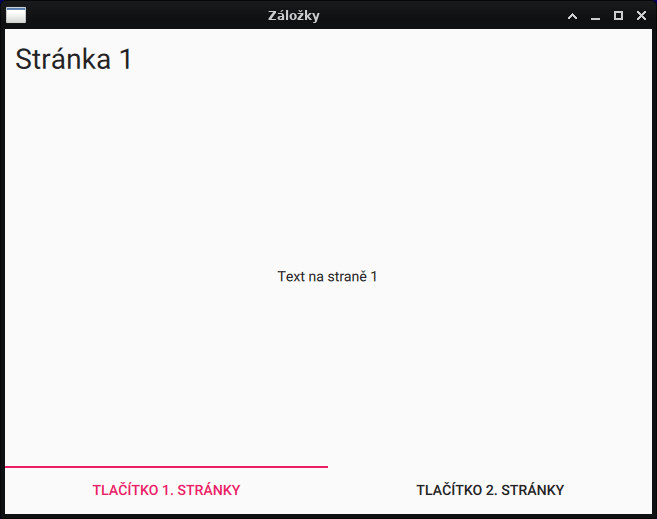 The described example project shows how to simply add and load a translation in cooperation with Localazy service. To be able to dynamically change the language in runtime, the whole translator management should be moved into a standalone C++ class with callable member functions from QML.

In such a way, multiple translators can be loaded and one of them can be installed according to the selected language. Later, the active one can be removed and replaced by another one without the need to restart the application.

This article has been produced by a member of the developer team at Nepanikar.eu. Thank you.

Setting up Python logging for a library/app

How To Install Zoom Video Conferencing App On Linux

Forget all the hassle and make your app available in 80 languages free of charge with the translation platform built for app developers.

Translate your app
How to improve the PageSpeed score of your Nuxt.js website in 6 steps
#devtips #howto #nuxt
Introducing the Strapi localization plugin by Localazy
#strapi #howto #localization
Translate Ad Banners on the fly with Localazy API
#api #marketing #howto

Once suspended, localazy will not be able to comment or publish posts until their suspension is removed.

Once unsuspended, localazy will be able to comment and publish posts again.

Once unpublished, all posts by localazy will become hidden and only accessible to themselves.

If localazy is not suspended, they can still re-publish their posts from their dashboard.

Once unpublished, this post will become invisible to the public and only accessible to Localazy Team.

Thanks for keeping DEV Community safe. Here is what you can do to flag localazy:

Unflagging localazy will restore default visibility to their posts.