In my previous post I gave a brief introduction about what is Openshift (now OKD) and how we could easily deploy Gitea. Now we will focus on building and deploying java applications using the "source2image" (S2I) strategy.

But what is this S2I?

According to the S2I project site:

Source-to-Image (S2I) is a toolkit and workflow for building reproducible Docker images from source code. S2I produces ready-to-run images by injecting source code into a Docker container and letting the container prepare that source code for execution. By creating self-assembling builder images, you can version and control your build environments exactly like you use Docker images to version your runtime environments.

What will happen in practice is that Openshift will take your project's source, combine it with a builder docker image and generate the final runtime image used to run the application.

To run our development environment, we will use minishift to create an openshift cluster. Use the commands below to download and install minishift (if you are using linux):

With minishift installed, we can configure and start it (which may take several minutes):

To interact with Openshift, we need to download the oc command line tool, but with minishift we can use the bundled one, just execute the following:

Then we login to openshift:

Now that we have minishift up and running, we can start deploying some application. Let's start with a django example application.

But first, let's create the project:

(Do not worry with the message about a ruby application, we are actually deploying a python application ;)

A project is the openshift terminology to a namespace, a place to group related resources and define access rules to these resources. For example, we could allow user "snake" to view our "django-example" project, user "rattlesnake" to view and edit (trigger builds and deploys, etc.) and not give any access to user "badger".

With the project created, we can create the application:

You might be asking "what is going on?". Well, we are telling openshift to take the python:3.6 image and combine it with the source code available at https://github.com/sclorg/django-ex.git. The syntax is "image"~"source".

But be careful! The python:3.6 is not the official python image from docker hub! It is instead from centos/python-36-centos7 and was imported to the openshift integrated registry! It is an S2I image to build and run python projects! You can view other images using the command oc get imagestream -n openshift

The output of the oc new-app will have some information about the application, with the following at the end:

The suggested command oc expose svc/django-ex will do something very important: it will expose a Service (a Kubernetes Service) to external traffic through a Route. The Route is very similar to a Service, but will handle external requests that matches a specific hostname and can also handle encryption (https).

Unlike previous commands, exposing a service does not produce much output, so let's list the available routes to get the one we just created:

Accessing the route address will show the following screen: 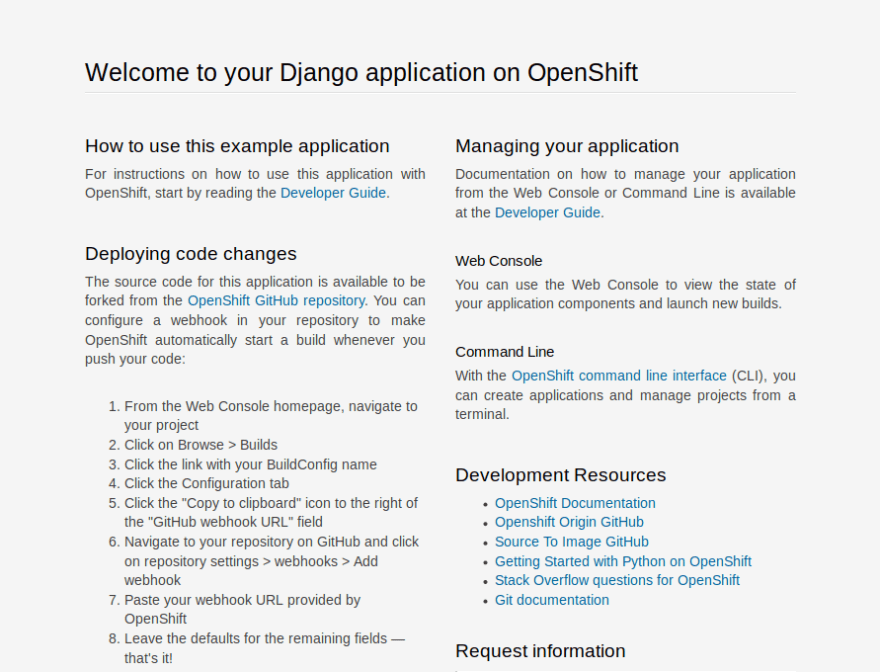 Openshift also has a very nice web console accessible at [https://192.168.99.100:8443/console]. Just login with the same credentials we used before ("admin" for both username and password). 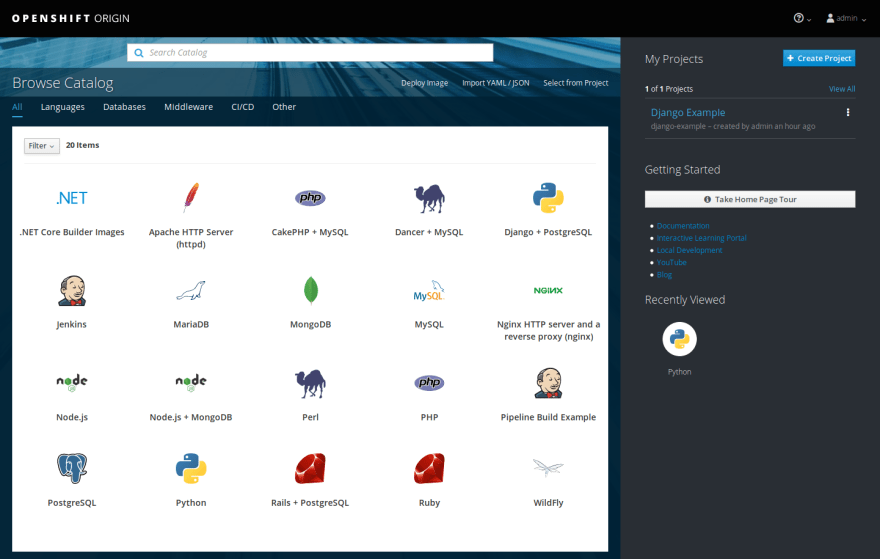 Opening the link to our project on the right will take us to the following page: 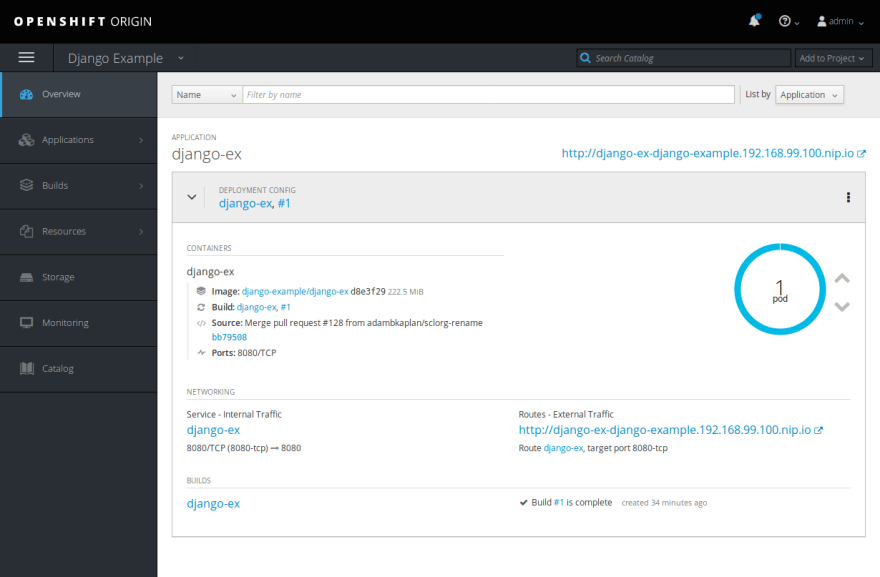 It is the project dashboard where we have an overview of the project, the applications deployed, routes, container status, etc. We can even scale the container!

The web console has lots of featues, even though some actions still require using the cli, like creating a service by exposing the Deployment.

This is it for now. Next time we will get into the web console.