Let's take the first step in building a full stack app with Elasticsearch!

In this blog, we will be building a server using Node.js with Express.

If you are relatively new to Node.js or Express, some of the terms or concepts mentioned in this blog may seem confusing to you.

Check out my blogs if you need some background info on Node.js or Express!

This project directory will eventually include both the server side and the client side code.

We will focus on the server side code for now!

In the location of your choosing, execute the following command in the terminal.

Side Note: I keep all my projects in a directory called mini_crash_course. You will see this reflected in the screenshots of the terminal shared in this blog.

Execute the following command in the terminal.

Step 3: Open the earthquake_app with the code editor of your choice

I use VS code. I have previously set up a code . command to open up VS Code straight from my terminal.

When you execute steps 1-3 in the terminal, the terminal should look similar to the screenshot below.

Open your project directory with your code editor as you normally would.

When you do so, you will see the earthquake_app directory open on your code editor.

As a prerequisite step, you have installed Node.js.

Let's initialize a new Node.js project so we can start building our server!

Go back to your terminal.

Within the earthquake_app directory, execute the following command.

This command accepts all default options in the terminal dialogue. It creates a package.json file in the root directory. This file keeps track of our app scripts and manages any dependencies our server needs.

In the terminal, you should see something similar to the following screenshot.

Go to your code editor to view the earthquake_app directory. You should see a package.json file within it.

For our server, we need to install the following dependencies.

Copy and paste the following command and execute it in the terminal.

If you have no idea what these dependencies are used for, don't worry! We will go over these when the time comes.

You will see something like this in the terminal.

After executing this command in the terminal, take a look at your code editor. You will see that package.json and package-lock.json files have been automatically created.

If you look at the package.json file, you will see that it lists all the dependencies we have installed.

Step 6: Set up a server directory

Using your code editor, create a directory called server within the earthquake_app directory. 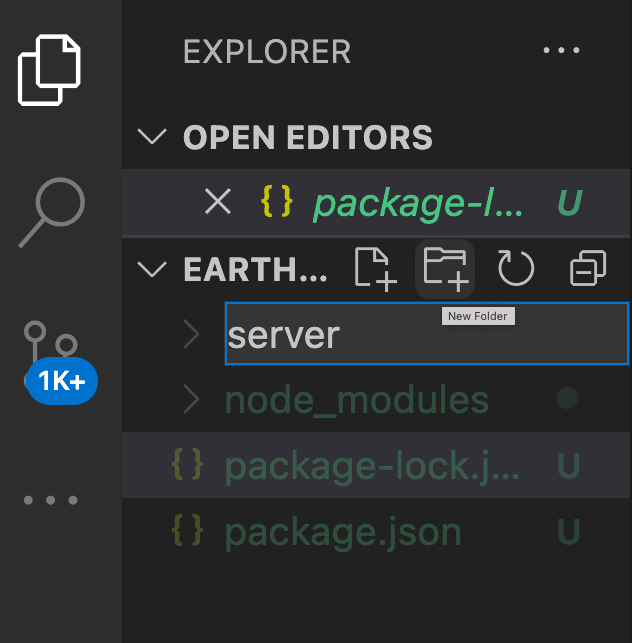 Within the server directory, create a server.js file. This file will be the entry point to the server and handle the server startup, routing, and other functions of our server. 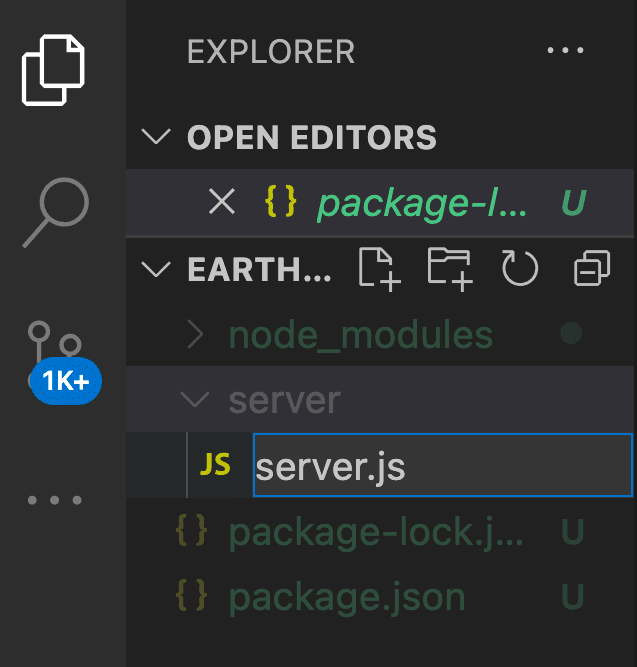 Let's make sure our package.json knows this.

Open the package.json file then go to line 5.

Replace "index.js" with "server.js" as shown below.

This will let package.json know that server.js will be the entry point to the server.

Next, let's specify what command we can use to execute server.js.

Within the package.json file and scroll down to line 6 "scripts". We will add an npm start script here.

Add a comma at the end of line 7 and add the following in line 8.

This step will allow us to execute the server.js file in the server directory by executing npm start in the terminal.

What is nodemon in front of server/server.js you ask?

In step 5, we installed a dependency called nodemon. Without this dependency, the server must be manually restarted every time you make changes to your code.

nodemon automatically restarts the server every time we make changes to our code so we don't have to do it ourselves!

We are now able to start the server by using the command npm start in the terminal.

Within the server.js file, copy and paste the following code.

Let's go over this code snippet!

For reference purposes only, I have included screenshots of code that I will be explaining.

If you need to copy and paste the code, please refer to the code snippet above or the GitHub repo for part 2.

Line 1
In order to create a server with Express, we need to require the express library to access all the functionalities that come with it.

Line 3
Among these functionalities, express() is used to create an Express app. We set express() equal to a constant app here.

Line 7
We instruct the server to listen for HTTP requests on port 3001 and print a message to the console explaining what browser URL you can use to test the server.

In the terminal, execute the following command to start the server.

In the terminal, you will see that your app is executing server.js in the server directory and that the server is listening at http://localhost:3001.

We now have a server that can be connected to Elastic Cloud!

Move on to Part 3 to create an Elastic Cloud deployment.

How to Build a CRUD Application in Angular 14 +

The perfect open-sourcer does not exist

Once suspended, lisahjung will not be able to comment or publish posts until their suspension is removed.

Once unsuspended, lisahjung will be able to comment and publish posts again.

Once unpublished, all posts by lisahjung will become hidden and only accessible to themselves.

If lisahjung is not suspended, they can still re-publish their posts from their dashboard.

Once unpublished, this post will become invisible to the public and only accessible to Lisa Jung.

Thanks for keeping DEV Community 👩‍💻👨‍💻 safe. Here is what you can do to flag lisahjung:

Unflagging lisahjung will restore default visibility to their posts.