If you haven't heard about Revery it's a library which aims to bring you truly native React without sacrificing developer experience.

Revery is written in Reason, but for this article no previous knowledge of either technology is required.

We'll go over the basics as we move along and if you squint your eyes a bit, Reason looks quite a bit like JavaScript.

I've prepared a minimal template for Revery to get us up and running, so let's start off by cloning that.

When working with Reason Native, the package manager we'll use is called esy.
It has a workflow very similar to other great tools like yarn or npm and the easiest way to install it is from npm. So, let's go ahead and do that!

Now that esy's in place, lets install the dependencies specified in package.json.

There are some things to note here.

First off, Revery depends on skia which is an open-source graphics engine powering Google Chrome, Android, Flutter and more. Skia is quite a big dependency, and since we're building it from scratch (among other dependencies), this may take a while, even 30 minutes or more. 😲 So, even though that might sound like an eternity, at this time, it's expected.
However, once built, subsequent builds will be almost instant.

Secondly, depending on your platform, additional packages may be required to be able to develop in Revery. For an up-to-date list, look for your particular platform here: Building & Installing Revery

With all that said, be ready to grab a drink and relax for a bit. 🙂

To save some time we're only going to cover VSCode in this tutorial (though personally I use vim, so if you're interested in setting that up feel free to comment and I'll try to help out as best as I can). The plugin we'll be using is OCaml Platform. Install that in VSCode and we should be good to go.

Setting up a basic application

So, hopefully we've reached this stage, to check that everything is working, lets use the start-script specified in package.json to run the application:

This should open up a window similar to this. Pretty cool! 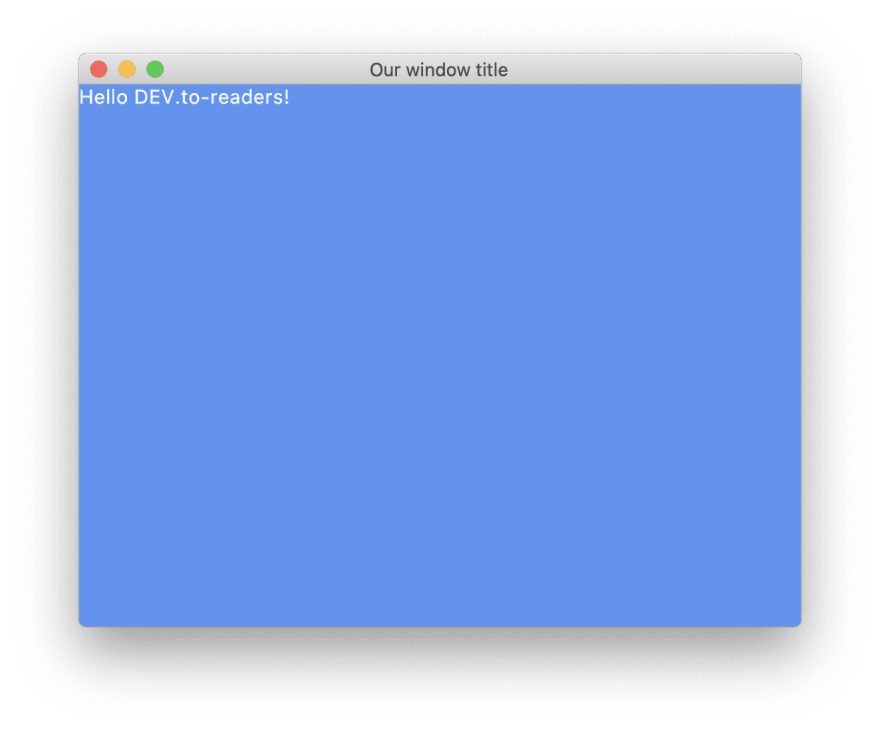 Lets look at what's in the code.

In src you'll see that there's one file located, App.re, it should look something like this:

This is all that is needed to create a basic Revery-application. Let's go through it in more detail.

At the top we open some base-modules for Revery, they contain all the functions and modules we need in order to create this application. By opening a module, we make all symbol's available to us without having to refer to the module itself.

In JavaScript, this would basically be the equivalent of:

We then proceed to create a function named init. This function accepts a Revery.App.t which we later provide from the App.start-function.

Within our init-function we create a window to which we'll render our application while specifying a title, width and height.

Note: If you're wondering what the ~ is for, it's a labeled argument. I find labeled arguments very handy as they allow us to pass arguments without worrying about order, and also have the benefit of documenting the meaning of the argument.
e.g.

We start our application by passing our created window to the UI.start-function.

Note: If you're wondering why we're prefixing the update-variable with a _ it's to let the compiler know that we'll not be using this variable to silent the warning the compiler would otherwise have given us.

Lastly, we then return () which is called unit, you can view it as void in other programming-languages.

Note: In Reason a function always needs a return-value even in this case where we're only doing side-effects.

In JavaScript for example, a function without an explicit return-value will return undefined.

So, at this point, we (hopefully) have something running. That's cool and all, but in all honesty, it doesn't do very much, so let's change that.

We'll start by creating a custom component. Above the let init-definition, lets add this:

Let's walk through the code.

We begin by using let%component which means that this will be a stateful component. We then use the state-hook, available to us in the Revery.Hooks-module.

This is similar to useState in React, but instead of an array, returns a tuple with the value and a setter.

We pass the value of clipboardText to our Text-element, which currently will always just render our hard-coded value (despair not, we'll change that in a minute)!

Anyway, if we run this now, we should be looking at something like this: 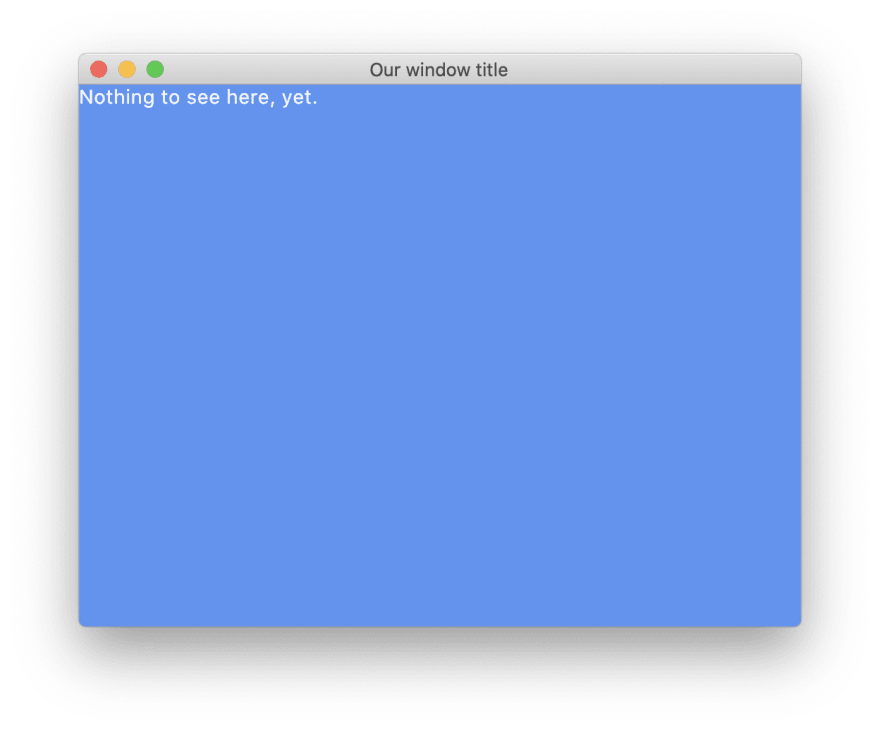 That's not a lot different than what we had before – visually. The good news though, is that we've created a custom component with hooks.

Grabbing what's in the clipboard

To access what's in our clipboard we'll use a nifty library called SDL.
SDL provides a cross-platform API for accessing quite a few system API's like keyboard, mouse and audio.

Revery exposes bindings to the SDL-library. With auto-complete, we can see that we have three methods related to the clipboard.

We can see that getText takes a unit, in other words no arguments, and returns an option(string).

In Reason, there's no such thing as null, but since we often have to represent that something can be either Some(thing) or None, we use the option-type which will force us to handle both cases.

If we re-run the example now, for me, quite unsurprisingly, I get something related to this article: 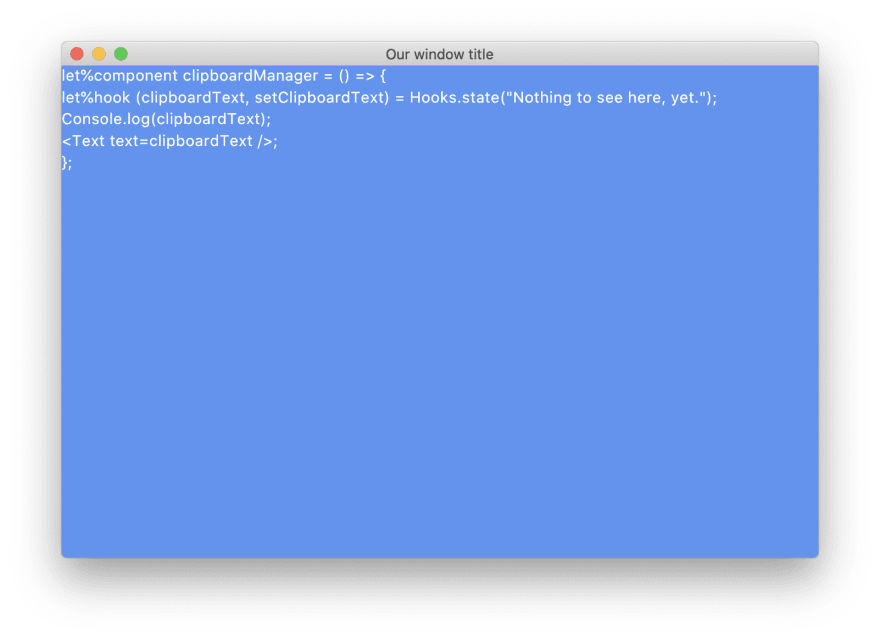 If you'd try copying something else, you should be able to see the changes reflected immediately in the application. That's because we're continuously calling setClipboardText. Probably at something like 60 fps. Had this been in the browser, we'd probably see "maximum call stack exceeded".

So, our current approach isn't great. We're grabbing the value from the clipboard as fast as Revery can render which is probably a bit over the top.

For doing something continuously in Revery, we have a few options. In this case we'll use the tick-hook.

Looking at the the two first arguments of the tick-hook we can see that it takes a labeled argument ~tickRate of Time.t and a callback which gives us a Time.t and expects unit as the return type.

Here's an example on how we'd use it:

Let's update our code to use the tick-hook to call our getText-code once every second.

Cool! We have most things in place now. However, a clipboard manager truly only becomes valuable if we can see our previous values as well, so let's fix that!

First we'll switch the state-hook to instead of holding a string of text, store a list of strings with the initial value set to an empty list.

Secondly, we'll need to change things up a bit in our handleTick-function.

So, what changed here?

Well, since we're only interested in adding values that aren't already in the list (or we'd end up continuously adding values every second) we're using some functions from the List-module.

In our case though, since we're not interested in the value, but only the fact that there is a value, we'll use a utility-function from the Option-module to turn that option(string) into a bool, ultimately turning our List.find + Option.isSome into a List.exists-function (time for a PR to Tablecloth, perhaps!).

Note: The |> here is called the "pipe last-operator" because it "pipes"/passes the value into the last argument of the receiving function.

Lastly, we update our component to render a list of items.

And if we run it, this is what I get after copying a couple of items: 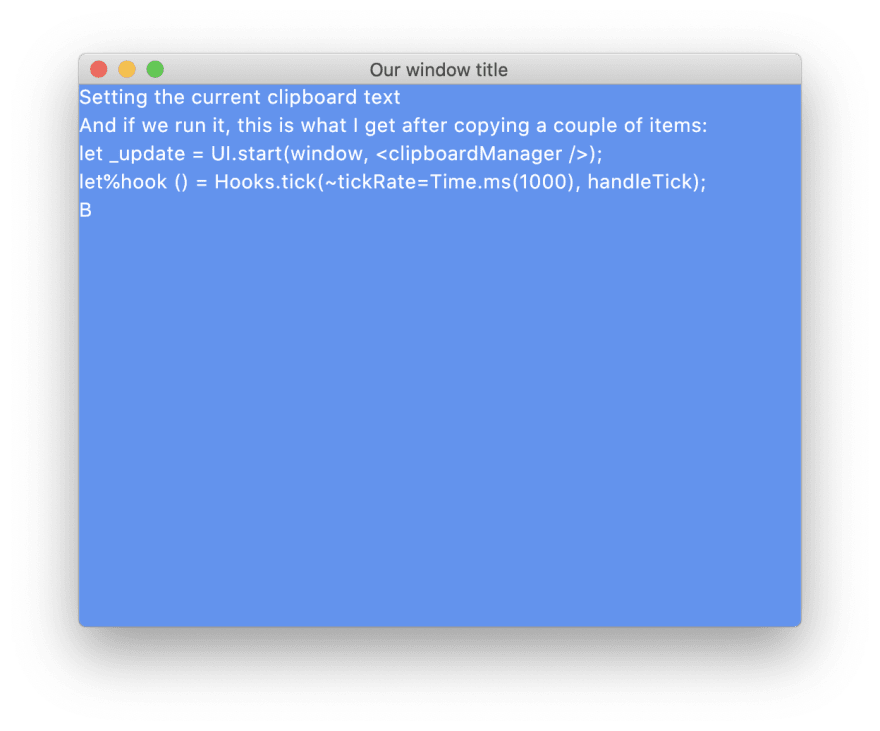 Clicking on an item should change the current clipboard-value to that text.

Remember how we had three functions in the Clipboard-module?

In the line where we're mapping over the clipboardItems, let's add a Clickable component, making our code look like this:

Now, when clicking on an item in the list, your clipboard should be updated with the value that was clicked.

And that's all there is to it!

Here's what we ended up with.

Many thanks if you managed to get this far, hopefully you found this interesting!

Revery is quite a cool project, and even though it's pretty new I think it has a lot of potential.

If there's an interest, we could make a part two and try to make it more product-like.

Needless to say, if you're feeling adventurous and feel like adding your own touch, I'd love to see what you come up with!

PS. Special thanks to Glenn and Bryan for feedback on the article.

PSS. If you have questions, issues or would simply like to hang out there's a Discord for Revery (https://discord.gg/UvQ2cFn) which you're of course more than welcome to join!

Tom Ekander
What book(s) are you reading these days (and we should too)? 📖🧠
#watercooler #discuss #books
Appwrite Storage Meets Backblaze B2
#opensource #appwrite #tutorial #cloud
Finding the coordinates of an element in a 2D array
#typescript #algorithms #tutorial