In the past few weeks and specially the last few days with the recommendation to stay at home due to the pandemic crisis we are fighting against (stay at home, guys! it is never an exaggeration this recommendation), I've been reading a lot of articles and experimenting with new technologies. On one of those occasions I came across this great article by Sunil P V about how a URL shortening application works and after reading it and seeing the architecture I thought that developing it would be a great way to pass time. I wrote before about how I struggle at having ideas for practice projects here and here, so it sounded reasonable.

Borrowing the diagram that Sunil P V has in his article I will explain the technologies I used to develop the project and why. First, let's see the diagram: 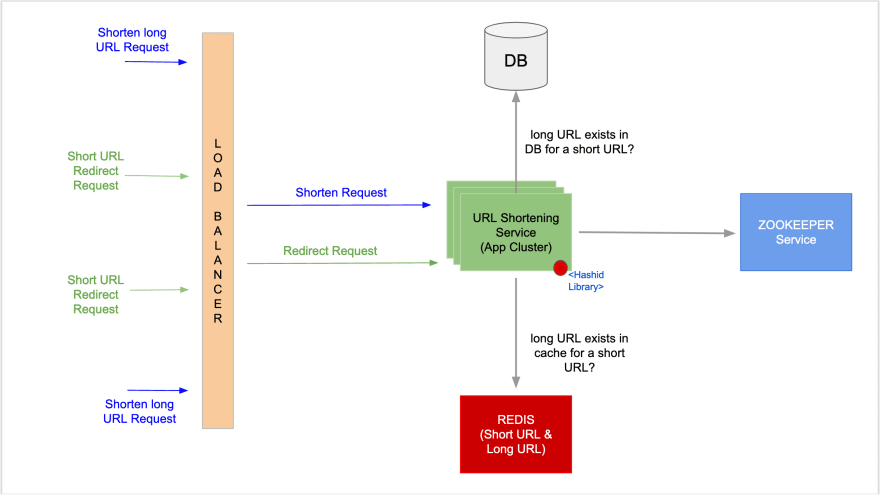 Every URL shortening application I've seen so far works similarly. When the user sends a long URL, the API generates a short hash that identifies the long URL and saves both information into a database, then when the user requests for sho.rt/hash the API gets the hash and the long URL represented by it and redirects to that URL. Easy enough.

The most important part of the architecture is the API itself, represented by the green box in the diagram, this API is supposed to have many instances behind a load balancer, which means it needs to be distributed. We have the database where the URL information is persisted, Redis for caching purposes and Zookeeper for coordination. Let's go into more details:

The code can be found here and it also has some optional features that I was experimenting with such as tracing with Zipkin and metrics export to Elasticsearch. Since it does not make part of the core, I will not talk about it here, but feel free to enable them if you want.

Lets start the code discussion by the specifics of the configuration. There are two very important beans and one for convenience that are configured. For convenience I declare a Hashids bean with the salt already so that I don't need to recreate every time I use:

Then there is a pretty straightforward Redis configuration, but notice that it is Reactive. Spring Data Redis already have a connection factory ready to use, I just need to have a ReactiveRedisTemplate to use:

Then there is a bean called UrlIdRange that is used to control the range of ids that the instance of the application is responsible. As I said before, the range is configured on Zookeeper, but every instance has its own range of ids to assign and only when it is exhausted it goes to the Zookeeper server again to get a new range. It already contacts Zookeeper to create the range on bean creation.

With that it is a good time to explain the SharedConfigurationService and the UrlIdRange classes.

The implementation of SharedConfigurationService uses Apache Curator Framework to connect to the Zookeeper server and perform the actions on the shared counter. I will spend a little more time on this because it is something I did for the first time and suggestions on how to improve or even say that something is wrong is welcomed. The class only has one method getSharedCounter and a property that gets the Zookeeper server base url from the application properties yml file. It receives a key of type String and then starts its processing:

3 - On try-catch block, everything is done:

The SharedCount is started and then the application get its versioned value and try to set the new value for the counter, it will only set if the values hasn't changed, otherwise it will keep trying. I did this way because I was thinking about the distributed characteristic of the application, in a high load environment collisions could happen and it would be a trouble for the management of the ids. I don't know if it is good practice or even if it is really necessary, so give me a heads up about what could go wrong or not. Then I close the counter and the client and return the value.

UrlIdRange constructor is called on the bean creation with the current counter and then it does the following:

The constructor calls calculateRange where the calculation is done, the range is 100.000 ids, if the counter is 0, then it will be 0 to 99.999 and so on. Maybe I exaggerated a little bit on the number and it could be configurable through .yml file.

With the initial configuration out of the way, it is time to dive into WebFlux. The API have two endpoints, as I've said before, one GET to find the URL and redirect and a POST to generate new short URLs. The router is very simple:

People may find the @RequestMapping annotation from Spring MVC convenient, but I think a router function like this where all routes are defined in one place also has its advantages, it is much easier to see what routes are available and Spring gives some features to keep it organized in large applications. Since Spring Boot is made for microservices, which shouldn't have many routes per application anyway, it is not a problem.

Then we have the UrlInfoHandler where the fun happens. It is very interesting and maybe a bit overwhelming to face declarative programming for the first time, but since I had some experience already with Javascript and its declarative, non-blocking style, it was not so bad, but certainly I need to show to some of colleagues later to see if they understand what is happening. Let's start with the findLongUrlAndRedirect method:

I get the shortUrl from the request and the magic begins. First I go to the cacheService to see if the UrlInfo is already there, if not, the Supplier given is called. Since the reactive approach of Redis cache in Spring is not supported by @Cacheable and its ease, as far as I know, I decided to use this approach. Maybe I could use AOP, but I thought that this way matched well with the rest of the code, full of lambda functions, or Functional Interfaces, as it is described in Java. Then I call a doOnNext() just for logging purposes, and then a flatMap redirecting. If empty, the application responds with a 404 status. The method that generates a short url works similarly in the reactive sense although different in logic, you can take a look in the code at the repository.

The implementation of CacheService is interesting because it leverages Reactor's features exclusive for caching:

Using CacheMono I can get reactive control flow exclusive for caching, it also made possible the usage of my supplier in such a smooth way using onCacheMissResume. But first it uses the lookup method to call Redis with the given key, very straightforward since Redis reactive interfaces have the same usage as the blocking ones, but delivering a Mono<T> to us. Finally, in case of miss, the value is cached using andWriteWith. In any way, the object is returned to us, continuing the flow. Very interesting logic and please tell me if there is anything to improve!

Despite not getting into details about the POST route, it is interesting to see the implementation of saveIfNotExists from the UrlInfoService, which is called by the handler to generate the short url and save, but only if it does not exist, the chain of three methods is called:

The last important part that is left to be mentioned is the data layer using R2DBC. This is also very straightforward since Spring Data R2DBC repositories doesn't differ much from the standard, differing only by returning Mono or Flux. One thing I noticed though is that I didn't find a way to map table relationships on R2DBC, there is no javax annotations or Hibernate annotations, of course, for that stuff and I didn't find any reference to that on the documentation. However, I may be mistaken. Let me know if you know anything about that.

It was a really enjoyable experience to get a diagram of an application architecture, add your own ideas and materialize it in code. I hope I can find more articles of this type in the future. There was other experiments I didn't mention here such as documentation and testing, take a look at the repository to see what I did about that, I will probably write another post about it. Thank you for all who reached the end of the post (it was a long one) and let me hear what you think!

I built a REST API with Redis

Leonardo Teteo
Java Web Developer with a passion for Spring and cloud computing. Know a thing or two about AWS. Trying to learn NodeJS lately with the help of TypeScript.
The magic known as MySQL FULLTEXT index.
#mysql #java #search #dev
Design Patterns: use or not to use
#java #webdev #programming #discuss
Lessons learned about performance
#java #spring #performance #webdev

Once suspended, leoat12 will not be able to comment or publish posts until their suspension is removed.

Once unsuspended, leoat12 will be able to comment and publish posts again.

Once unpublished, all posts by leoat12 will become hidden and only accessible to themselves.

If leoat12 is not suspended, they can still re-publish their posts from their dashboard.

Once unpublished, this post will become invisible to the public and only accessible to Leonardo Teteo.

Thanks for keeping DEV Community 👩‍💻👨‍💻 safe. Here is what you can do to flag leoat12:

Unflagging leoat12 will restore default visibility to their posts.