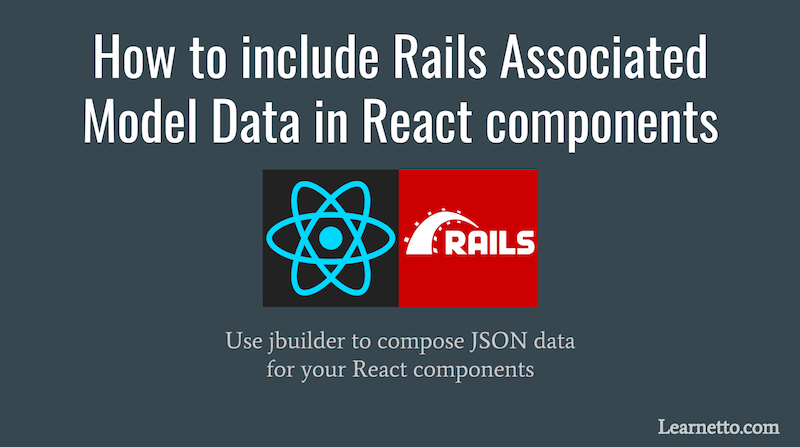 When you start using React with Rails, one of the frustrating problems you quickly run into is trying to access associated model data from your React component.

Let's say we areÂ building a chat app with Rails and React. We have three models, Chatroom, Message and User, which have the following relationships between them:

And we have aÂ Message componentÂ for rendering individual messages:

In addition to the message body we also want to display the user's name.

If you're using a standard Rails ERB or Haml view template, you can simply write something like:

And that will just work even if you didn't include the user data in your database query in the controller.

However,Â unlike in a Rails view, if we callÂ message.user.nameÂ inside our React component without having specifically included that data in the prop sent to the component, it will throw an error.Â

While a Rails template is actually able to call the model on-the-fly and get data it doesn't have, we don't have that luxury with React.

We need to explicitly compose the JSON with the associated User model data because a React component can only access the JSON data we provide it.

There are many ways to include the associated model data, including manually composing the JSON in the controller, defining a customÂ as_jsonÂ methodÂ on the model or usingÂ ActiveModelSerializers.

One of the cleanest and most flexible ways is to useÂ jbuilder, which gives you a simple Domain Specific Language (DSL) for declaring JSON structures. The jbuilder gem comes included with Rails.

In the example above, we can include our user data in the message JSON by defining it in aÂ _message.json.jbuilderÂ file like this:

The jbuilder DSL is quite powerful and allows you to do all sorts of custom structuring of the data.

For example, let's say we want to send all the messages in chronological order and user data for a particular chatroom to a Chatroom component. We can define theÂ chatroom jsonÂ like this:

Check out theÂ jbuilder documentationÂ to learn more about all its features.

The full code of the Chat app isÂ on GithubÂ and there's a live demo running here.

You can also learn how to build it yourself in this two-part video tutorial - Â How to build a chat app with Rails 5.1 ActionCable and React.js Part 1Â andÂ Part 2.

Build on Flow | Learn FCL - 16. How to Send FLOW Tokens to Another Account

Master your craft and accelerate your career through premium books and video courses without wasting time on low quality content.

Sign up
How to use React with Ruby on Rails 6
#ruby #rails #react #javascript
The 11-minute guide to building and launching an online store with Rails, Stripe Checkout and Heroku
#rails #stripe #heroku #ruby
How to make AJAX calls in Rails 5.1
#rails #ruby #react #javascript

Once suspended, learnetto will not be able to comment or publish posts until their suspension is removed.

Once unsuspended, learnetto will be able to comment and publish posts again.

Once unpublished, all posts by learnetto will become hidden and only accessible to themselves.

If learnetto is not suspended, they can still re-publish their posts from their dashboard.

Once unpublished, this post will become invisible to the public and only accessible to Hrishi Mittal.

Thanks for keeping DEV Community 👩‍💻👨‍💻 safe. Here is what you can do to flag learnetto:

Unflagging learnetto will restore default visibility to their posts.