I’ve been working with git for years but up until now I never had to revert a commit, let alone an entire branch. Turns out reverting is quite simple and can be done in a single command but cherry-picking all the branch’s commits is a repeatable and tedious task since we need to copy each commit, create a string out of them and give it to cherry-pick.

What I wanted was a way to give git the merge commit and let it figure out which commits to cherry-pick. For example, in the case described below:

I had already done a “custom” git-alias so I figured I could do something similar and create cherry-grab: git cherry-grab f51c08c

Two things helped in creating cherry-grab and the first one is the ^ suffix that one of its usages is to get the commit’s parent. So if we run git show edaa436^ git will translate it to git show 84f8f45.

The second thing was rev-list which returns a list with all the commits that can be reached through the parent “pointer” starting from the provided commit. So if we run git rev-list edaa436 git will return edaa436, 84f8f45 and 55da68d.

Also, rev-list can exclude all commits that are reachable from a given commit as long as we prefix it with the caret (^) symbol. So if we run git rev-list edaa436 ^84f8f45 git will return just edaa436.

Then we need to reverse this list so that we can apply each commit in the proper order:

Having the commits in the correct order we just need to pass them to the cherry-pick command to apply their changes:

Finally we need to put in an alias to make it reusable:

Nothing fancy or special, we just wrap the sequence of command with a function and tell git to call that function when ever we use the cherry-grab alias.

In order to make it reusable we replace the parent commits with $1^2 and $1^1 respectively which are translated to the second and first parent of the passed commit. 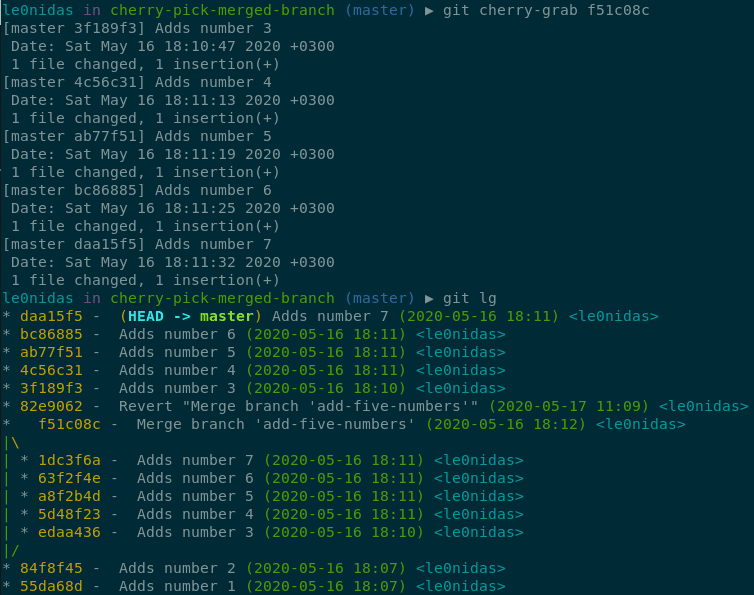 Once suspended, le0nidas will not be able to comment or publish posts until their suspension is removed.

Once unsuspended, le0nidas will be able to comment and publish posts again.

Once unpublished, all posts by le0nidas will become hidden and only accessible to themselves.

If le0nidas is not suspended, they can still re-publish their posts from their dashboard.

Once unpublished, this post will become invisible to the public and only accessible to le0nidas.

Thanks for keeping DEV Community 👩‍💻👨‍💻 safe. Here is what you can do to flag le0nidas:

Unflagging le0nidas will restore default visibility to their posts.