We have discussed cache consistency before, and at that time we mentioned it is possible to achieve good consistency if we implement read-aside cache correctly. To further improve consistency, a more complex solution must be used, e.g., write through cache or write behind cache.

Today, we are going to discuss another common scenario of caching, Dogpile Effect.

Dogpile Effect means when the system is under heavy volume of traffic, whenever a cache invalidates, either by cleanup or timeout, it will have a huge impact.

Therefore, let's see what approaches are available to deal with Dogpile Effect. There are three common approaches as follows.

Each of these three options has its own pros and cons, and in fact, they are already widely used.

Question, do you know which one is the race_condition_ttl of the cache store in Ruby on Rails?

Before we talk about this approach, let's review the read path of the read-aside cache.

The problem occurs when the cache is missed.

When there are lots of read requests under a high volume system, it will result in lots of database accesses. If we can keep the cache active anyway, can't we solve Dogpile Effect?

But such an approach has its drawbacks.

Although this is a simple and brutal approach, I have to say it works very well in some situations. If we have a critical cache that has to deal with a lot of traffic and the cost of updating is high, then keeping that cache fresh is the most effective way.

As long as we avoid updating all cache entries, then it won't take up a lot of space and will be less likely to trigger corner cases.

Warm up cache can work well on specific critical cache, but if no critical cache is defined at all, then the benefits of warm up cannot be applied effectively.

Therefore, the second approach is suitable for general purposes.

When reading a cache, if a cache timeout is found, then extend the cache time slightly and start updating the cache. If there is a concurrent read request, the later read request will read the cache with the extended time to avoid accessing the backend database simultaneously.

Assuming that the cache TTL is 5 minutes, we set each cache to have a one-minute extension time, as shown in the Gantt chart below.

Let's use a sequential diagram to represent the two concurrent request scenarios. 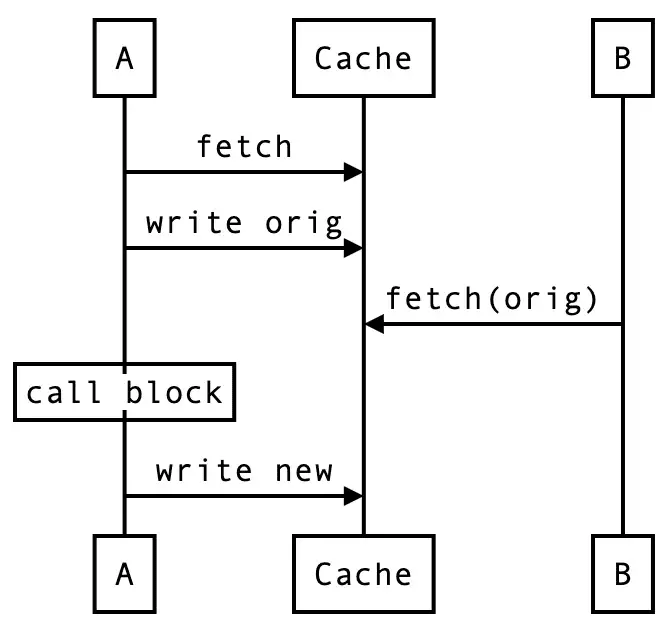 However, B finds that the cache has not expired when it reads, because the cache is extended, so it can get the original value.

With this approach, only one of the N concurrent requests needs to access the backend, and the rest of the N - 1 requests can still fetch the value from the cache.

Actually, Ruby on Rails's race_condition_ttl is this implementation. Lines 855 and 856 in the link above are the operations that extend the cache time.

This approach looks like an effective way to handle high volume traffic, with only one request for access to the backend, right?

The answer is, no, not really.

This is obviously useless when facing a high-concurrency scenario. Let's continue to describe the problem in a sequential diagram. 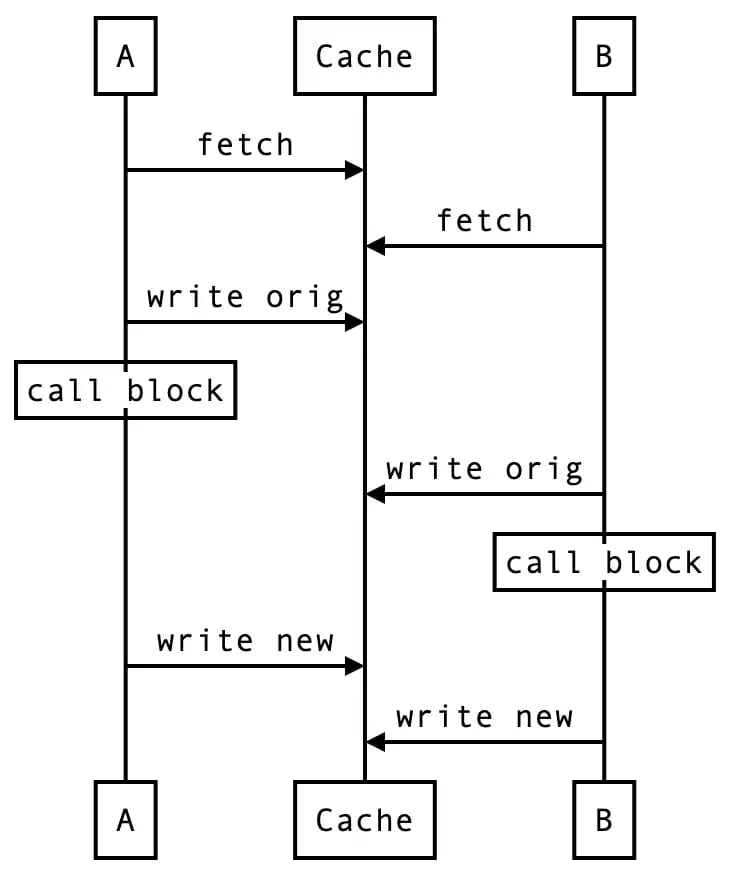 The same A and B as earlier, but this time A and B occurred very close to each other. As you can see from the sequential diagram, B has already happened when A tries to write the original value back to the cache, so B also feels he is the first one.

When N requests arrive completely at the same time, then such an implementation still cannot solve Dogpile Effect.

Extending the cache time seems to have solved most of the problems, but it's still not good enough in a high-concurrency system. Therefore, we need a way to serialize the high-concurrency scenario. Previously, we introduced the concept of the exclusive lock.

In this approach, we are trying to avoid multiple concurrent requests to go through the cache by exclusive lock.

The wait-and-acquire lock must also verify whether the cache has been updated in order to further avoid duplicate database accesses.

Of course, there is an obvious drawback to this approach. Making the concurrent process serializable would significantly reduce concurrency. In addition, the waiting is an extra overhead that not only consumes resources but also affects performance.

It's worth mentioning that we often say Redis is not reliable, so in this scenario, is it necessary to use Redlock to further improve reliability?

In general, no, even if Redis is not reliable enough to be used exactly once, the rare occurrence of a leak is not a problem in this scenario. This is not a scenario that requires strong consistency, but at best a few accesses to the database.

In order to address a common problem with caching, Dogpile Effect, we have reviewed three common approaches.

The scenario where the warm up cache is applicable is the "critical cache". Once we can narrow down the scope of the cache, then keeping it fresh is the most intuitive and easy way for us.

Extending the cache time is a general purpose approach that can effectively tackle a variety of high volume scenarios. By providing a time buffer, the cache is allowed to serve for a longer time until the cache is updated by "someone".

Each of these three approaches has its own advantages and benefits, but in fact, extend cache time and exclusive lock can be combined into a total solution. I will explain the implementation details of this in code in the next article.

Let's call it a day.