Today we are going to talk about consistency, especially the consistency of data between cache and database. This is actually an important topic, particularly as the size of an organization increases, the requirements for consistency will grow and so will the implementation of consistency.

We all know that for every nine, the difficulty and complexity of the implementation will increase in an exponential way, so for a startup service, there are basically no resources to maintain a very high SLA.

Thus, how can we use the resources as effectively as possible to improve consistency? That's what this article will introduce. Again, the consistency mentioned here refers specifically to the consistency between cache and database data.

I believe we all agree that inconsistencies are inevitable when we put data in two different storages. So what makes us put data into cache rather than risking inconsistency?

For the above three reasons, the need for caching arises.

It seems that caching is necessary, so how do we use caching for the consistency as much as possible?

To keep this article from losing focus, the caches mentioned are all based on Redis and the database is MySQL, and our goal is to improve consistency as much as possible with limited resources, both hardware and manpower, so the complex architectures of many large organizations are out of our scope, such as Meta's TAO.

TAO is a distributed cache and has a very high SLA (10 nines). However, to operate such a service, there is a very complex architecture behind it, and even the monitoring of caching is extremely large, which is not affordable for an ordinary organization.

Therefore, we will focus on the following patterns, highlighting their problems and how to avoid them as much as possible.

We add a TTL to each data when writing back to the cache.

When updating data, inconsistencies occur because the data is only written back to the database. The inconsistency time depends on the TTL settings, nevertheless, it is difficult to choose a suitable value for the TTL.

If the TTL is set too long, the inconsistency time will be increased and, on the contrary, the cache will not be effective.

It is worth mentioning that caching is built to reduce the load on the database and to provide performance, and a very short TTL will make caching useless. For example, if the TTL of a certain data is set to 1 second, but no one reads it within 1 second, then the cached data will be no value at all.

The read path seems to be the usual practice, but when the database is updated, there should also be a mechanism for updating the cached data. And this is also the concept of Read Aside.

This process is the same as Cache Expiry, but the TTL can be set long enough. This allows the cache to have as much play time as possible.

Such read and write paths look fine, but there are a few corner cases that can't be avoided. 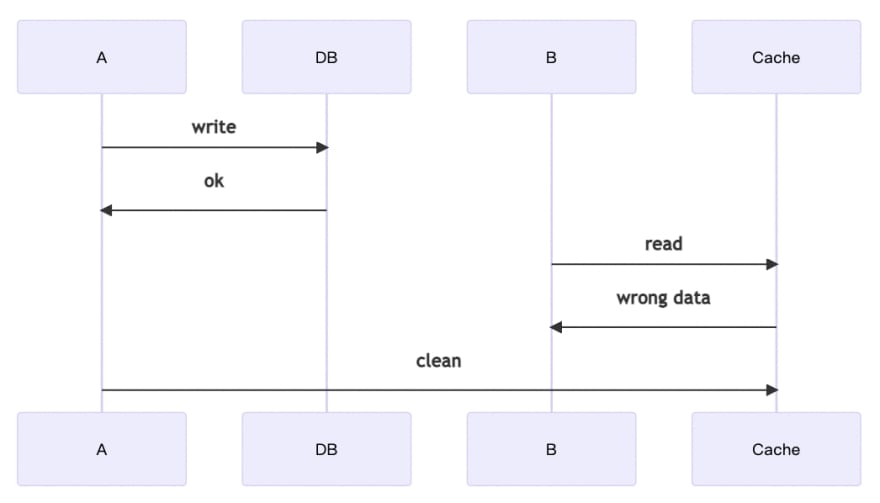 A wants to update the data, but B wants to read the data at the same time. Individually, both A and B have the right process, but when both of them happen together, there may be a problem. In the above example, B has already read the data from the cache before A clears the cache, so the data that B gets at that moment will be old. 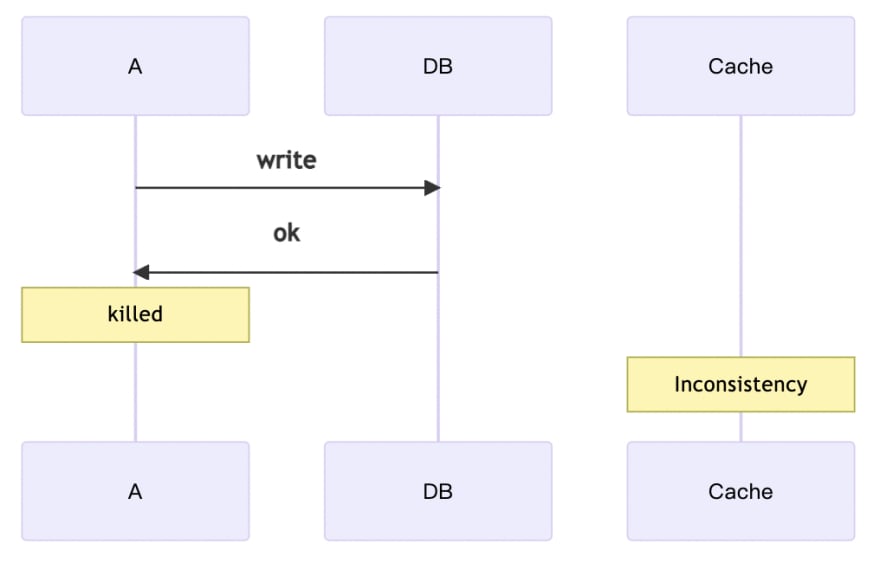 When A is updating the data, the database is already finished updating, but it is killed due to "some reason". At this moment, the data in the cache will remain inconsistent for a while until the next time the database is updated or a TTL occurs.

Getting killed may sound serious and rare, but it's actually more likely to happen than you might think. There are several scenarios where a kill can occur. 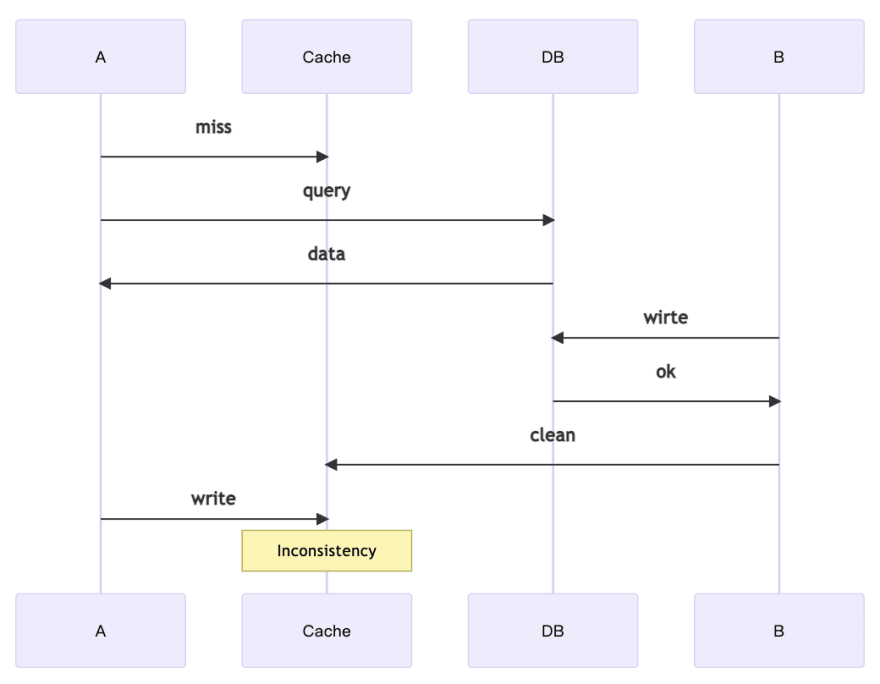 When A wants to read the data and B wants to update the data, again, both of them have the right individual process, but the error occurs.

Case 1 and Case 3 can be minimized when the application manipulates data correctly. Take Case 1 as an example, don't do anything extra after updating the database and clean up the cache right away, while in Case 3, after reading data from the database, don't do too much format conversion and write the result to the cache as soon as possible. In this way, the chance of occurrence can be reduced, but even so, there are still some unavoidable situations, such as the stop-the-world generated by garbage collection.

Case 2, on the other hand, can reduce the chance of artificial occurrences by implementing an graceful shutdown, but there is nothing that can be done for an application crash.

In order to solve Case 1 and Case 2, some people will try to modify the original process.

This process is exactly the same as the original Read Aside.

This process is the opposite of the original Read Aside. 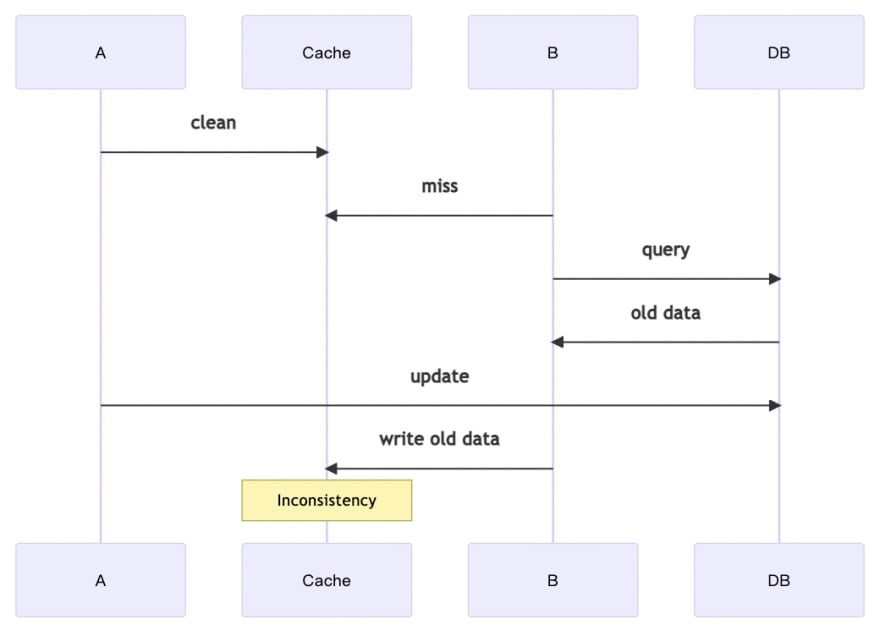 Although the original Case 1 and Case 2 are solved, a new problem is created.

Therefore, it is not recommended to use such a variant.

In general, a relatively high level of consistency can be achieved by Read Aside, even if it is only a simple implementation, but it can also have a very good reliability.

Nevertheless, if you would like to improve consistency further, Read Aside alone is not enough, and a more complex approach is required, but also at a higher cost. Therefore, I will leave these approaches for the next article. In the next article, I will describe how to make the best use of the resources at hand to achieve as much consistency as possible.

To emphasize again, although Read Aside is very simple, it is reliable enough as long as it is implemented correctly.