In this tutorial series I'm refactoring a node.js/express/mongodb clone of medium.com into a serverless app. You can view the deployed result at https://mediumserverless.com. You can learn more about the medium clone here; "The mother of all demo apps" — Exemplary fullstack Medium.com clone powered by React, Angular, Node, Django, and many more

In Part 4 I'm refactoring one single API endpoint for the entire medium app into a deployed lambda. In the end, you will have the same amount of code, with the difference that the deployment of the app is included with that code. The cool kids call it infrastructure as code

Photo by NASA on Unsplash

Because we are configuring these things instead of implementing them in code, what you'll learn will also work in any programming language that AWS supports 💪⭐️ (JavaScript, Python, Ruby, Java, Go and .NET) 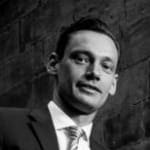 If you haven't followed along Part 1-3 you can still jump in here and follow along just fine. But I do recommend going from the beginning if you really want to learn how the whole serverless thing works.

Then open upp app/app.js and add export the app so that the handler we created in tutorial part 2 can use it.

The Repo you just cloned contains an entire app. We're going to refactor one small part of this app into a proper serverless lambda api function, and still run the rest of the app serverlessly alongside it. Easier than it sounds I promise.

Let's start at the top. Let's take the below express.js callback/endpoint located in app/routes/api/users.js and turn it into a lambda!

Create a src directory in the root of the project. All our new fancy lambda-stuff is going to be placed here. Within src, instead of a "routes" directory, lets have a "handlers" directory.

Let's briefly go over the differences before we plug this in. From top to bottom:

Don't worry about the error handling, we'll deal with that later. (Later !== never in this case)

3. Adding our function to Serverless.yml

Lets configure this function as an API endpoint by adding it to our serverless.yml located in the project root dir.

I think the serverless.yml additions are pretty self explanatory? Let me know in the comments if not!

That is all you need to configure and deploy your route! Now any POST request to mediumserverless.com/api/users will be directed to our new fancy lambda. Any other call will be directed to the expressApp. So our old express app and our new lambda can co-exist :)

Make sure all dependencies are installed with npm install in both the root directory and the app directory. You can then run the project on your local machine withsls offline --skipCacheInvalidation and you should see it running:

So the express app will handle any http call except for POST requests to /api/users which will be handled by our usersPost function. Meaning that our old app and new fancy lambda is co-existing.

The repo you cloned comes with a potman collection located in folder test in root dir. Open up the test suite in Postman and run the test in Profiles called 'register celeb' and it should pass. If you have problems running the test checkout part 2 of this tutorial which covers how run the test suite

Let's update our production app! Because service: serverless-express is defined at the top of our Serverless.yml even though we are in a different repo now you're still going to update the same service.

You will recieve an AWS generated URL for your api. Now try running the test with the Postman environment set to production and things should work. (Remember to change the postman production environment varialbe url to the one you just recieved, checkout [this section in part 2 of the tutorial] if you need details on how to do this.)

Since you now have two functions, one for the entire express app, and one for usersPost, you can stream logs for these individually with serverless logs -f postUsers -t and serverless logs -f expressApp -t. This will stream the log output of your production function to your terminal.

You may have noticed that the original code makes no attempt to check the validity of the input, i.e. the password, username and email. If you call our endoint without these as empty strings, you will actually be able to register a user with "" as username and e-mail. If you are running this in production, eventually someone will try to mess with you. Lack of input validation is a guaranteed nightmare.

There is some validation in the Mongoose model;

However, you can still input an empty string (No idea why, but you can..). Also you can have an insanely long email or username, which could break your frontend ui.

But that's not really the issue here. The issue is that validating your input is a cross-cutting concern. It applies to most of your functions, not just mongoose. In functions without mongoose, you would need to come up with different validation. And then your validation logic is spread all over your app and done in different ways.

Great! Solves our first scenario. But what if the username is really short? Or outrageously long? Or a number? And you still need to implement proper logic for making sure you're getting an actual email! So you start adding all that as well and soon you have more validation logic than business logic. Not fun! And you have to write this type of code for all your other api endpoints too. This will slow you done.

Implementing validation logic in code is a terrible idea:

What you want is being able to just trust that the input you get into your lambda meets a certain specification. A certain Schema.

In any web app (more or less), you are going to be dealing with a lot of JSON. Sending, recieving, storing it etc. So the ideal solution is to define what our user object is allowed to look like in a separate JSON Schema. We're then going to link to that schema in our Serverless.yml and simply reject any http request that doesn't conform to our schema. Meaning; we can be confident that our function has the input we expect.

Let's create a schema for our user object and place it in a separate file/folder far away from our business logic:

I don't think I need to explain the schema since JSON Schema is very human-readable! There is a great tutorial with examples for JSON schema in the aws docs.

Now simply plug it into our endpoint via Serverless.yml:

That's it! Now deploy the app again and try calling the endpoint with a bunch of bad inputs. (Serverless Offline does not implement JSON schemas, so you have to try against production) You will recieve a 422 "bad request" response and your function won't even be called. This is important; with Lambda you pay based on invocation and usage, not having your function invoked with bad inputs is therefore a good thing.

The easy way to craft your own JSON Schema is simply to scroll through the JSON Schema Reference for whatever type you're trying to validate (number, strings etc), then go from there. You'll get the hang of it very quickly.

As a bonus, you could use this same schema to validate the create user form on the front-end; effectively making the JSON Schema a contract between your front and backend.

We've saved ourselves a bunch of annoying error handling by validating the input to our lambda. But what about errors that happen even though the input is valid?

In software design that's called the cake and eat it pattern.

Now save() is a method from an external dependency (Mongoose). If a username or e-mail already exists it will throw Error [ValidationError]: "User validation failed: username: is already taken., email: is already taken." with some variation, depending on what already existed. Lambda will map all uncaught errors to below standard format and respond with code 500 - Internal Server Error due to the built in error handling when calling lambda from API Gateway (since we are calling the function with a http event, that means API Gateway).

We'll solve this via Serverless.yml.

Will result in the below 200 OK reply:

You now have error handling of this this save() error that you can easily add to any api endpoint that uses save(). With just one function that doesn't matter so much, but as your application grows, being able to consistently and simply handle errors like this, away from your code, will be a boon to your productivity. You also have all your error codes documented in one place, so it's easy to see in one consistent place what different codes and errors your backend might return. Your frontend developer will appreciate this.

If throwing your own error you could do something like this:

And have that handled by a standard code 422 template with any variables you include accessible by the template. So the error-response-template.yml is more powerful than what we've used it for so far. And you can do a lot more with it in order to format a good response. We'll get to that in later parts when we build on this powerful error handling strategy further :)

Checkout the aws docs for reference on mapping template variables

Checkout the final code from this tutorial in the Github Repo. I also recommend checking out the previous part if you want a full understanding of how to run real world apps serverlessly:

In part 5 of this tutorial I'm going to continue refactoring the Users part of the API. Specifically, I'm going to deal with authentication and authorization. Currently, that's all tangled up with our code and endpoints and I want to do it with an authorizer function instead.

Generally what I'm doing here is doing less and less things in code, and more in configuration. By configuring instead of coding the boring stuff that all apps need, those things can be done much quicker for your apps - and the deployment is taken care of.

Offline-first made easy with GraphQL, Amplify DataStore and Vue

How I created a door bell with AWS Serverless