Testing has always been a bane of the product development cycle. In an era where a single software bug can cause massive financial losses, quality assurance testing is paramount for any software product no matter how small or how big.

In the current agile development cycle where the development and release cycle involves releasing a set of features and extending those sets in iterated releases, testing has become even more complicated. Manual testing, though very useful in many cases, fails under the deluge of features, buttons, links, accordions, javascript, and integrations. Add performance testing, and user experience testing to the equation and you get no choice but to automate the testing process. And that’s where codeless testing comes into place and the subject of this post. 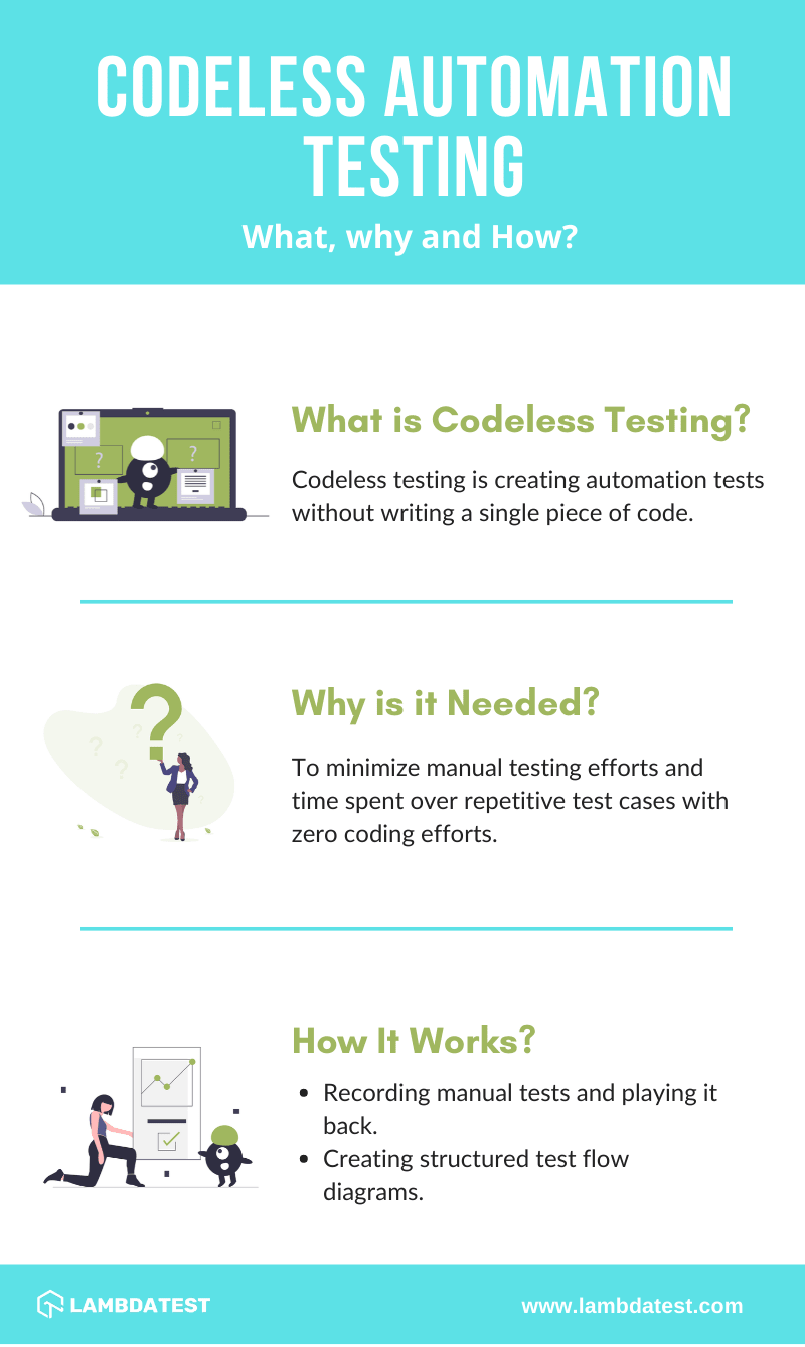 Explore how to cherry-pick the right (tools for automation testing)[https://www.lambdatest.com/blog/automation-testing-tools/?utm_source=devto&utm_medium=organic&utm_campaign=sept_05&utm_term=rd&utm_content=blog] for your business and delve deeper into the top tools available in the market in 2022.

Automation testing is a necessity of an agile development process. It involves creating a separate software framework to test the primary solution through automated means. The more complex a solution is, the complexity of the testing framework becomes. Automation testing becomes critical once you get to a stage where every release requires the execution of thousands of test cases and actions. Traditional automation testing involves writing separate execution software scripts for each test case and then executing them through a separate software setup dedicated to running, monitoring, and logging the test cases.

Run Selenium, Cypress, and Appium tests on LambdaTest to scale with the demand of your website and web apps.

For large projects or projects having a fast release cycle, creating a test environment, and writing test scripts themselves take a huge amount of time and resources. This ultimately defeats the whole purpose of automation testing which was aimed at reducing testing times and testing resources.

A solution to this problem is codeless testing. Codeless testing is creating automation tests without writing a single piece of code. This approach has been steadily evolving with new innovations in technology, focusing more on reducing the coding process and making it more user-friendly. The ultimate aim is to make the setup so easy to use that automating a test scenario takes very less amount of time and requires almost no coding efforts. Making the process true codeless testing.

There are many tools already in the market that aims to achieve this objective, however, to term them Codeless is still not very accurate. The correct term would be something like script less because, in the background, most tools would just provide the testers one more abstraction layer, which would translate user actions and instructions to testing scripts which in turn drive test automation. This abstraction layer is more user-friendly with good graphical interfaces, that will make the testing process easier and more manageable. So even though the user doesn’t have to write a lot of code personally, the tool still runs on scripts.

In this Cypress tutorial, we talk about the (Cypress test automation)[https://www.lambdatest.com/blog/cypress-test-automation-framework/?utm_source=devto&utm_medium=organic&utm_campaign=sept_05&utm_term=rd&utm_content=blog] framework that is fundamentally and architecturally different from the Selenium test automation.

There are multiple approaches to codeless testing. The two most prominent ones involve recording manual tests and playing them back, and creating structured test flow diagrams that are used to run tests. The record and play approach is the most popular one right now and is especially favored by web-based products.

The idea behind the approach is that a tester manually performs a test, in which the tool records click by click. The tool then creates scripts to automate the test itself. The testers can also edit the scripts, and the testing process to best suit their requirements.

This Playwright testing tutorial, explores each part of the process from the initial installation of the Playwright automation framework until the full execution of a test suite.

The Future of Codeless Automation; Will It Kill Automation Testing?

For the foreseeable future, the need for automation coders would not diminish. Codeless testing would be a tool for automation testers to fast-track their jobs rather than replace their jobs. In the unforeseen future, the tools will become smart enough that they will completely eliminate the need for test script coding, allowing testing instructions to be directly passed on to the system in a complete codeless package. Right now though, automation functional testing is the most important requirement of any agile software development process.