Behind any competent and successful software, there is a story of empowered, talented, and hardworking people, who are working in an awesome culture.

But, as the saying goes, it only takes ‘one bad apple to spoil the barrel’, the same can be said for the workplace. On many occasions, I have seen teams crumble, where one person is not performing and is constantly causing problems.

When setting up an engineering centre of excellence, culture was at the heart of all that we did. If we hired, we only hired those that fit the culture that we were trying to build i.e. constructive not destructive criticism — the advantage was that those who did not fit the mould left as it was not the right fit for either of the parties involved.

The interview routine was particularly key to hiring with the right culture in mind, for instance asking questions around what the candidate would deem as a good culture would mean that we only hired people who answered in a way which emphasised the importance of culture. One example that stood out for me was one candidate who used the phrase ‘I would describe my leadership style as being the last one to eat and putting others first’, this one statement showcased to me that this leader would be a perfect fit.

It is important to set a team up for success right from the get go. This can be done by having clear mantras and values.

Some Mantras I have used for Quality Assurance (QA) teams:

Values are equally as important:

For me, mantras and values should be the starting point for the team. When the basic components are being met it’s time to add specific points around ‘What culture do you want?’ and ‘What behaviors do you want?.’

How did we ensure these mantras and values were being lived and breathed by the team? One exercise which I was passionate about was getting a piece of paper and we all brainstormed what values and mantras we wanted, we then signed this sheet and anyone new coming into the team did exactly the same. This built a culture of belonging, even with remote teams a PowerPoint slide could have the same impact.

Reflecting on environments where it feels toxic, micromanaged, and there’s no teamwork — do you remember any happy customers? Happy environments generally churn out amazing work, but why? Because the culture is one of happiness.

Personally my best work has come from a situation of happiness and enjoyment, also if it’s something that I am passionate about it’s a double bonus. From experience we held a hackathon and I remember some of the best ideas came from working with people that you got on with and it really pushed my passion for accessibility, again this stemmed from a simple idea of an event where you work together.

What cultural aspects are key?

What behavioral aspects are key?

What can help you improve your culture?

Communities of Practice (CoP) — These are sessions of interest, where the aim is learning an area of mutual interest, which can span multiple team disciplinaries. What is key is that membership is not voluntary.

Where there is learning, there is always an improvement in team culture. Even learning new skills together can build a bond between the team. I have seen communities around ‘what is automation testing’ and it has helped to get engineering, product, quality assurance to understand automated testing better and this meant that everyone in the team could support and understand this interesting area.

Should you give CoP’s a try? Yes! They are easy to set up and will give maximum benefit to your culture.

I personally have learned lots from communities of practice, for instance a talented QA engineer taught the team how to have fun with some HTML, CSS and JavaScript, I even did a community of practice in my first role after University on ‘How to juggle?’ — though I have forgotten now. Communities are all about learning and the more learning the stronger the culture.

Another aspect of a high-performing team is the leadership approach. I have been very careful to say ‘leadership’ rather than management. Why? As leaders are those members who we remember when reflecting on our careers, ultimately leaders exist in an awesome culture.

In the past, I have seen many managers who act like army generals and sit on a comfy chair, and exercise their power to get something done. How was the culture in those teams? Pretty awful, and for me, that is why most members were low-performing.

What is a leader vs a manager 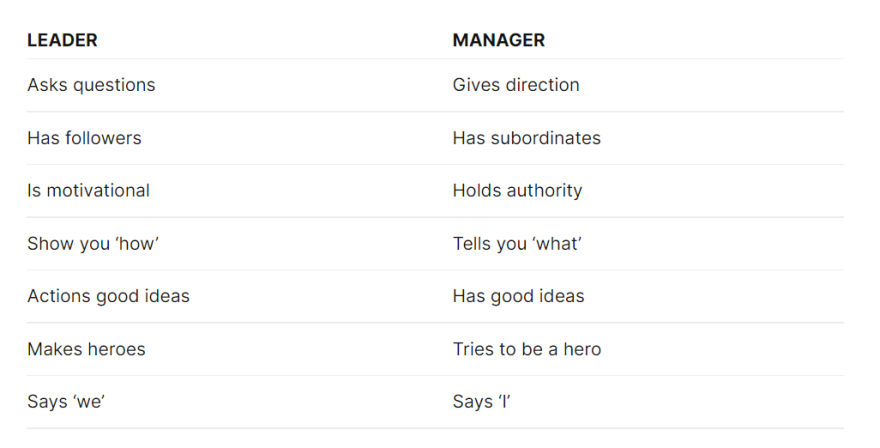 As per the above, in the great cultural environments that I have worked in — I have always seen leaders rather than managers. I know who I would rather work for! Who would you rather work for?

Cultural improvement takes time, though we can all work hard to make it a better place to work. I’m an avid grower of vegetables and take a humble tomato plant, with nutritious soil, water being plentiful and the right amount of sunlight, you will have tomatoes to fill a bucket. People are similar, in the right environments they will flourish and as a leader it will be one of your proudest achievements!

Submit button outside the form

Chat moderation in Wix with TensorflowJS and Velo

Once unpublished, this post will become invisible to the public and only accessible to Dileep Marway.