Automation testing is not always a smooth ride. There are cases where the tests would not work as expected, in which cases debugging the test code (or implementation) is the only way out! Debugging issues in tests become even more difficult if the test suite comprises a large number of test methods.

Like me, many QA engineers would co-relate to this situation when performing Selenium automation testing. There could be cases where we need to understand the memory allocation of the objects which cannot be physically seen from the outside. Though the call stack might help in such scenarios, digging deeper into the internals of the test code and/or the automation framework would be super beneficial.

Breaking the normal code flow by inserting breakpoints at strategic points can be used for debugging issues in the test code. In this blog, we deep dive into the essentials of debugging in Selenium WebDriver from a test automation point of view. We would also look at how to debug Selenium WebDriver in Eclipse and IntelliJ, the two popular IDEs for Selenium Java development.

For starters, debugging is a scrutinized process that involves a deep understanding and minute examination of the source code. For example, the code might have failed, or there is a need to take a deep dive into the framework code to understand execution steps in a much better way. I would term this as a major perk of working with an open-source framework like Selenium. The process of debugging involves four main stages, namely identify, isolate, fix and review.

In the first stage of debugging, we have to identify and understand the issue or failure in the code. This would help us to perform root cause analysis which is one of the key skills of a tester or developer. If one has identified the issue and understood its root cause, it would be easier to develop an approach to resolve the issue.
In the second stage, we have to isolate the portion of the code on which debugging has to be performed. However, it is not necessary to debug every line of code unless required. Therefore, we have to separate the faulty code into smaller chunks and perform debugging.

Then by understanding the cause of the failure, a fix can be provided to the faulty code, which can be finally reviewed and merged. Of course, it has to be fixed and reviewed so that it doesn't break the other parts of the code.

What are Breakpoints in Selenium WebDriver

Akin to software breakpoints, the breakpoints in Selenium WebDriver let us temporarily pause (or stop) the execution of the code. Once the execution is stopped, you can verify the essential elements of the source code.

When debugging in Selenium WebDriver, breakpoints should be inserted at appropriate places so that the required variable values (and other details) can be checked in detail. Whether you are using the Eclipse IDE or IntelliJ IDE, breakpoints are shown alongside the UI.

Did you know? CustomEvent interface represents any DOM event that can carry custom application-defined data.

How To Debug Selenium WebDriver In Eclipse

There are multiple ways to debug the code: having a code walkthrough, getting support from peers, refactoring and restructuring, etc. Debugging is often considered the easiest and most efficient way to debug the issue in the code. Several IDEs for web development provide the option of running the code and inserting breakpoints to debug the source code.

Since the steps involved in debugging mode look similar in most of the IDEs, you can use the IDE as per your requirements. Before running the tests in Eclipse IDE, set breakpoints at appropriate locations in the source code.

Breakpoint is usually a point where the code has to be stopped for further examination or understanding while debugging.

It is usually inserted in front of a single line or multiple lines in the code. By setting or inserting a breakpoint, the code will be executed up to the breakpoint, and the execution will halt once the breakpoint is encountered.

The breakpoint can be inserted into a single line or multiple lines of code, a method, and even a class.

Let us see how to insert a breakpoint in Eclipse IDE for debugging in Selenium WebDriver.

To add a breakpoint in your code, you can follow either of the below ways. 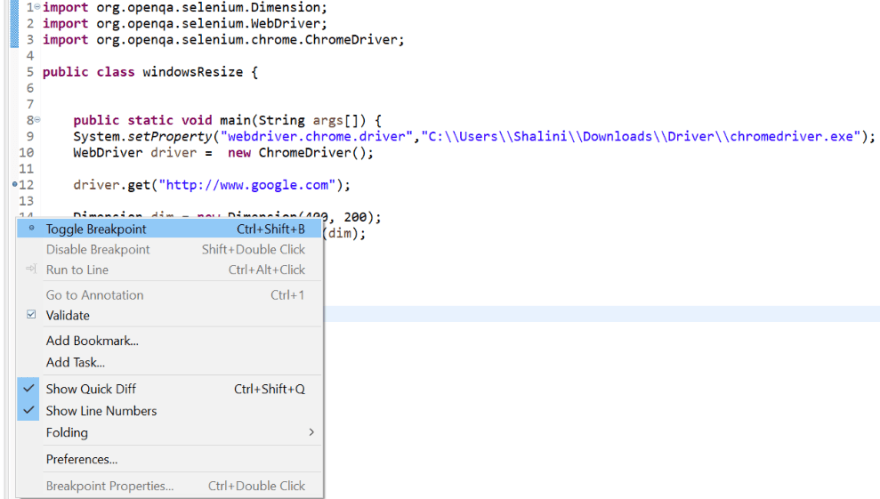 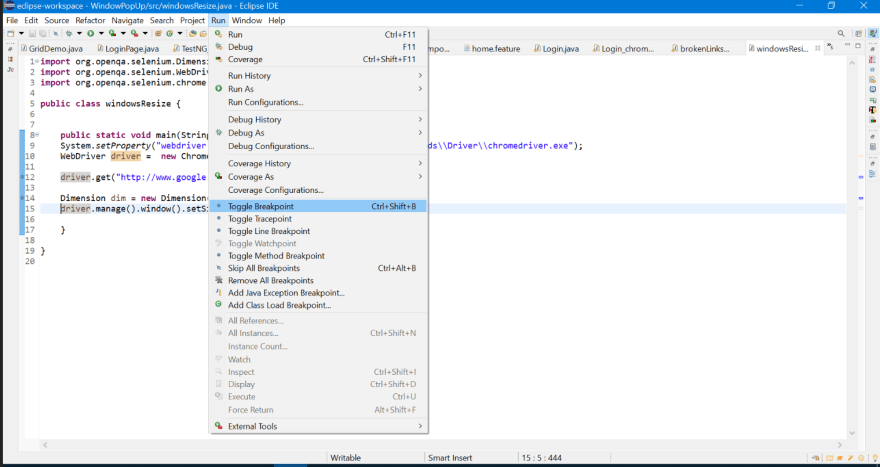 This way, you can add multiple breakpoints in your code. Once the breakpoint is added, you will see a blue circle on the left margin where you tried to insert the breakpoint.

Now that the breakpoint is added to the source code, it’s time to debug the issue.

Before running the code, we have to switch to Debug perspective. To do this, navigate to the Windows menu → Perspective → Open Perspective. Here, choose the Debug option. 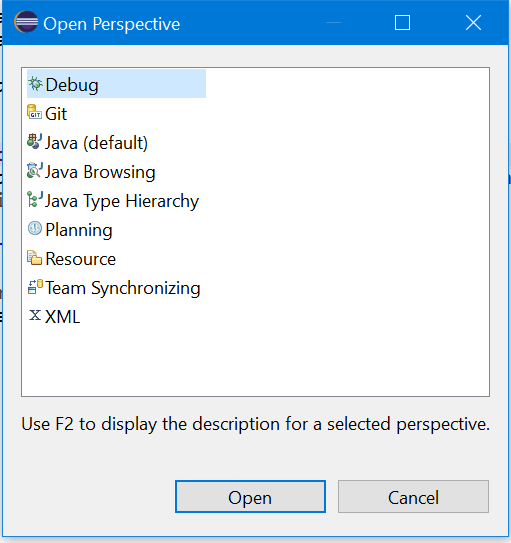 To run the code, you have to

Click the debug shortcut icon and then move to Debug As → Java Application.

The code will be executed, and it stops when it reaches the line where the breakpoint has been added. For example, in my code, I have added breakpoints in lines 39,40,41,42, and 45. So, while running the code, the execution stops at line 39 as it is the first breakpoint in the code and then moves ahead one by one.

When the breakpoint has been reached, it will be highlighted, as shown in the below screenshot. 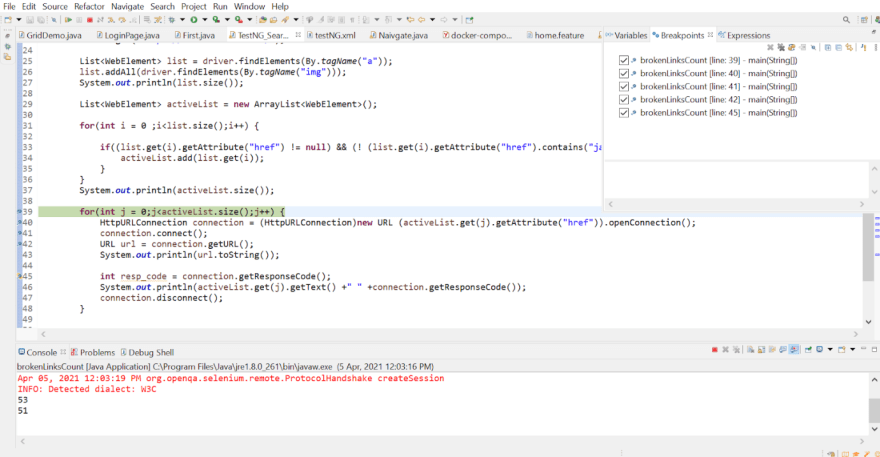 Once the execution starts, you could see a window that shows the variables, breakpoints, and expressions tab. 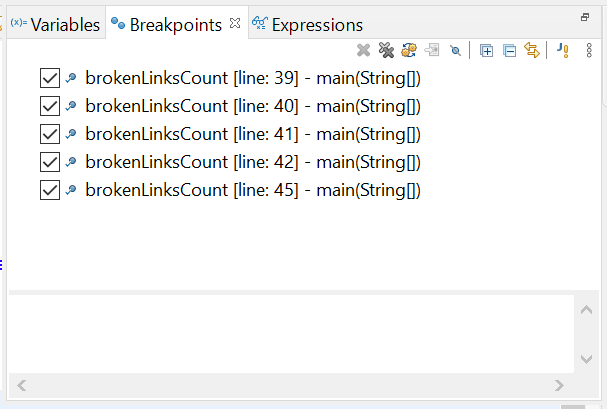 The Variables tab shows the values being assigned to the variables in the line where the breakpoint has been added.

To control the execution, we have various shortcut keys in the editor. You could see them under the Run menu. 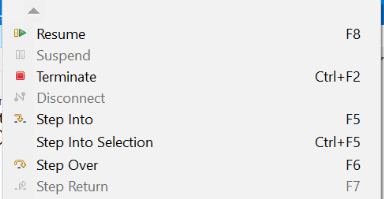 You can also view them in the submenu bar.

Let us understand their usage in more detail: 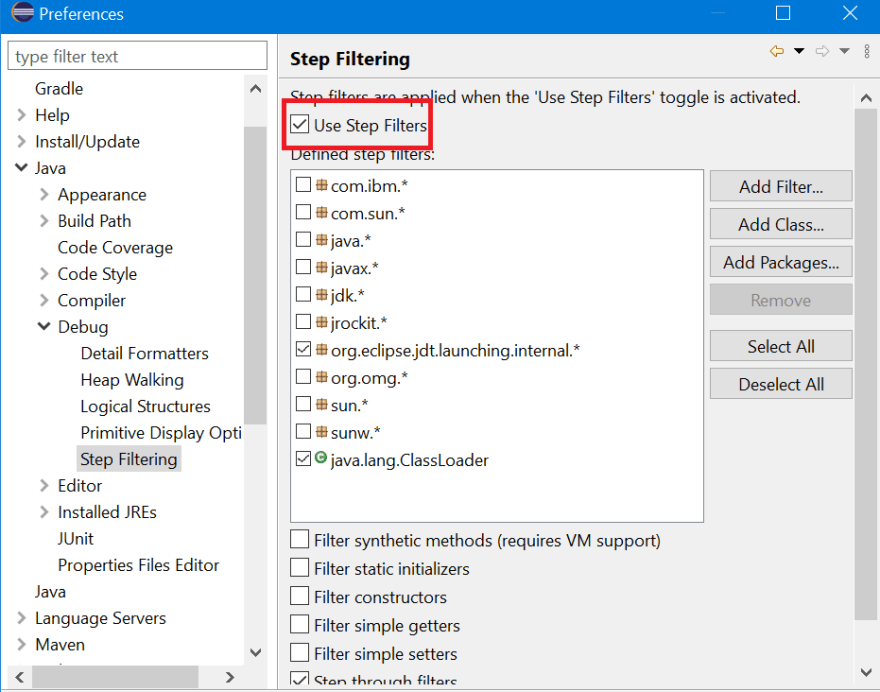 How to remove the inserted breakpoints?

Either of the following ways can remove the breakpoints added in the code. 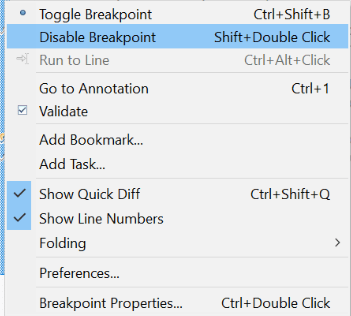 So far, we have seen the process of debugging in Selenium WebDriver by adding breakpoints in Eclipse. The idea of debugging seems to be almost the same across different IDEs.

Did you know? Do Not Track API enables websites to query the user's Do Not Track setting via Navigator.doNotTrack . The returned value is a promise that resolves to a boolean, "true" if Do Not Track is enabled, and false otherwise.

How To Debug Selenium WebDriver In IntelliJ

To add breakpoints in IntelliJ, you can choose either of the following ways, namely;

Once the breakpoint has been added, you can see a red circle on the left margin.
Similarly, you can also add a method breakpoint to debug the methods in the framework.

Running The Code In Debug mode

Now we can begin to debug the code in our framework. 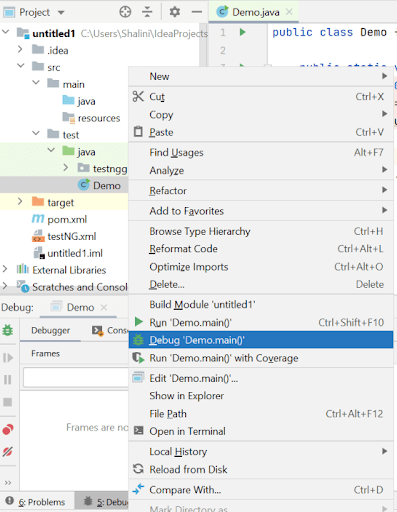 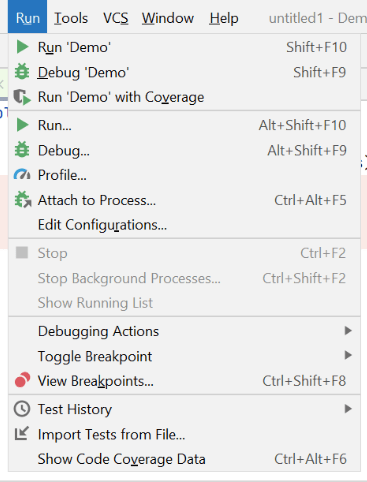 After clicking the debug option, you will see various options to control the execution under the Run menu. 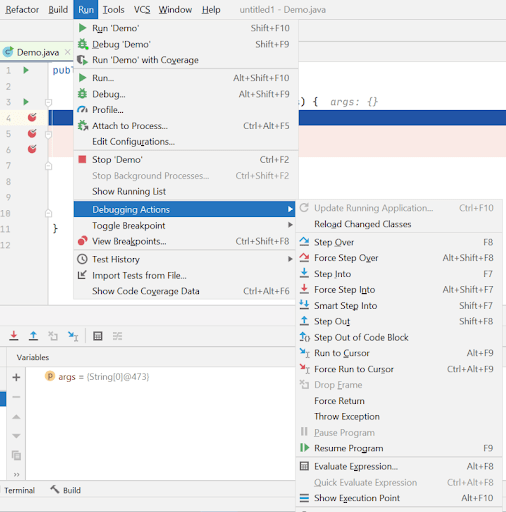 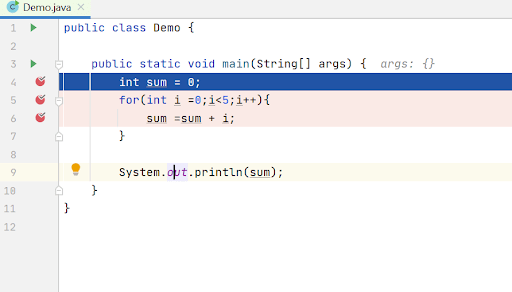 To terminate the debug mode, click the red square icon or the Stop option under the Run menu. 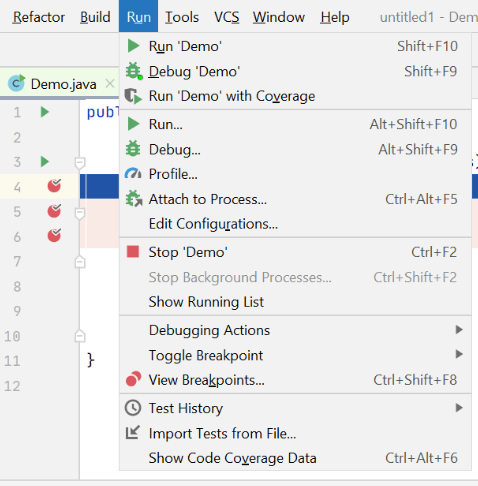 Now you would have got a clear picture of the similarity of the debugging process in different editors.

Let us understand an example for debugging in Selenium WebDriver.

Below is the code which was used for demonstrating debugging in Selenium WebDriver:

The above implementation is used to find broken links using Selenium WebDriver. As demonstrated earlier, we added breakpoints at appropriate places in the test code. Also, the tests are run on a cloud-based Selenium Grid provided by LambdaTest. Porting existing implementation from a local Selenium Grid to a cloud Grid requires minimal effort and also lets you reap benefits offered by parallel testing in Selenium.

Adding breakpoints at different points in the code will help us understand how each link in the website works and analyze the HTTP response code of each and every link, thereby understanding which link is broken. In addition, we can add breakpoints in for loops for debugging purposes if any link is broken and get to know the failure by getting the response code of the link.

Using breakpoints in the debugging mode helps analyze issues and fix the failure in the automation framework.

Did you know? with document.evaluate & XPath you can traverse various nodes in an XML/HTML document using XPath expressions. This allows you to look for specific attributes or content based upon a pattern.

Debugging in Selenium WebDriver is the art of understanding the code flow in a framework, analyzing the issue, and fixing the faulty parts in the test code.

# Use Vale Linter in LunarVim

Music Monday — What are you listening to? (August 8)

Once unpublished, this post will become invisible to the public and only accessible to Shalini Baskaran.