Ever came across the situation where you really need to open a web page fast and it’s taking forever because of slow internet speed? May be someone in your network is downloading a torrent choking the bandwidth?

It’s quite irritating, isn’t it?

In this era of 5G, a slow page load speed is a bane of seamless user experience, both for users and developers. We cannot control a user’s internet speed, but as developers, we can make sure that we tried every trick in the book to make the user’s web journey as smooth as possible.

HTTP (Hypertext transfer protocol) helps us to get smooth internet experience. It was first launched in 1996. It is an application layer protocol for collaborative, distributed, and hypermedia information systems which play a role as the foundation of data communication for the world wide web.HTTP was designed for communication between web browsers and web servers and it acts as a bridge between client and server.

Basically, it is used for transmitting hypermedia documents, such as HTML. HTTP is structured with URLs and hypertext. It is a request-response protocol in a client-server computing system.The first definition of HTTP/1.1, the version of HTTP in common use, occurred in 1997.

HTTP/1.1 ,update to HTTP 1, was standardized back in 1999. HTTP/1.1 was helping people for running their business online but there were some limitations in HTTP/1.1 which were then updated in v2.

The web back then was very different, with slower web pages and slower internet connections. But over the years, the way that we use the web has changed significantly and websites are now much more complex than they used to be.

Major update to HTTP launched in 2015 as HTTP/2 which resolved issues faced in HTTP/1.1.
HTTP/2 was derived from the earlier experimental SPDY protocol, developed by Google. It made web applications faster, simpler, and more robust. 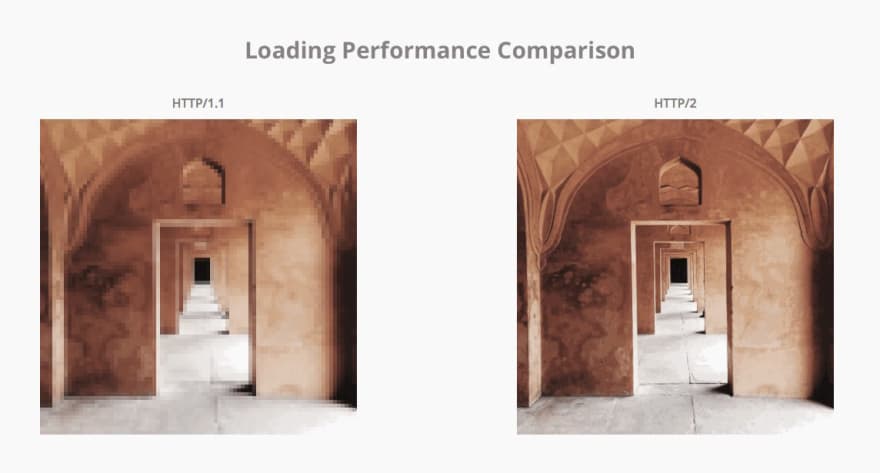 How to switch to HTTP/2

HTTP/2 is backwards-compatible with HTTP/1.1. However you need to do following things to switch to HTTP/2 :

HTTP/2 focuses on specific goals and issues of concern in HTTP/1.1 :

Most of the browsers now support HTTP/2. The list of browsers includes latest versions of Chrome, Firefox, Safari, Internet Explorer, Opera and others. You can use Akamai’s tool to check if your browser supports HTTP/2.

Header Compression
The header fields are transmitted after the request or response line. HTTP/1.1 requests and responses are not compressed and transmitted in plain text which causes a lot of unnecessary bytes being downloaded.

But in HTTP/2, the header fields are compressed and transmitted in binary codes making it more compact and efficient for the user computer to load.

Server Push
In HTTP/1.1, when your browser connects to a web server requesting a web page, the HTML file is sent first and then your browser request for other resource files like CSS, javascript etc. But in HTTP2 Server push, In addition to the response to the original request, a server can send multiple responses to a single client request without the client having to request each one explicitly.

If you have ever added an inline CSS, javascript or any other source file through data URI then you already experienced server push. By manually adding the source file into the URI, we are pushing that source file to the client, without waiting for the client to request it. We can achieve the same results with HTTP/2 with additional performance benefits.

One of the limitations of HTTP/1.1 is that it is only able to request files one by one on a single connection – this means requesting the file, waiting for a response, downloading the file and then requesting the next one. This creates the problem of head-of-line blocking and inefficient use of the underlying TCP connection. 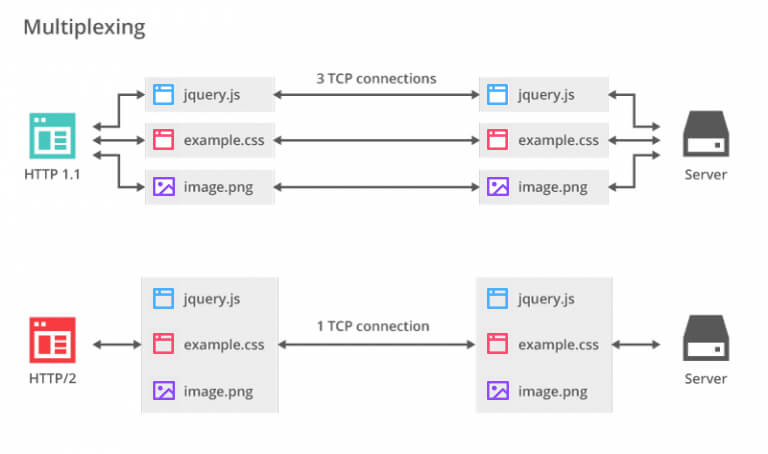 The new binary framing layer in HTTP/2 removes these limitations, and enables full request and response multiplexing, by allowing the client and server to break down an HTTP message into independent frames, interleave them, and then reassemble them on the other end.

Stream Prioritization
Once an HTTP message can be split into many individual frames, HTTP/2 allows for multiplexing of frames from multiple streams. The way in which frames are interleaved and delivered by client and server becomes a critical performance concern. To execute this, HTTP/2 standard associate weight and dependency to each stream.

The combination of stream dependencies and weights allows the client to construct and communicate a “prioritization tree” that expresses how it would prefer to receive responses. In turn, the server can use this information to prioritize stream processing by controlling the allocation of CPU, memory, and other resources, and once the response data is available, allocation of bandwidth to ensure optimal delivery of high-priority responses to the client

The advantages of switching to HTTP/2 are immediate. Most users are using the browser that can take advantage of the protocol, every day figure is rising up.

There are also some limitations businesses should take into account before moving to the new protocol.