As a software tester, you’re performing website testing, but in between your software is crashed! Do you know what happened? It’s a bug! A Bug made your software slow or crash. A Bug is the synonym of defect or an error or a glitch. During my experience in the IT industry, I have often noticed the ambiguity that lies between the two terms that are, Bug Severity vs Bug Priority. So many times the software tester, project managers, and even developers fail to understand the relevance of bug severity vs priority and end up putting the same values for both areas while highlighting a bug to their colleagues.

Severity and priority are both used to highlight the threat of dealing with a bug on urgency. Depending upon these two factors, it is decided further which bug should be dealt with first. The vocabulary of these two words comes up in bug tracking report, sprint management. Thus, it is necessary for every software tester to pro these factors.

Low: The bug is given the least attention. It may or may not be placed under the development bucket.

Medium: The fix may be considered after the deployment of an upcoming release or the next one.

High: The obstruction has to be resolved in the upcoming release as it affects the system severely and cannot be used until the bug is fixed.

Critical: It is a bug which is a major blocker and has affected the functionality of the whole web-application or website. The fix is to be deployed immediately or as soon as possible.

Catastrophic: As the name suggests this is when everything goes south. A bug walks in and corrupts every functionality that product has to offer. This is where all your development team, your testing team, your product managers come together immediately to find the root cause behind the bug asap to minimize further business loss. An example would be of Flipkart Big Billion Day Sale blunder, where the excessive traffic ended up breaking their server, inventory, and pricing as well. 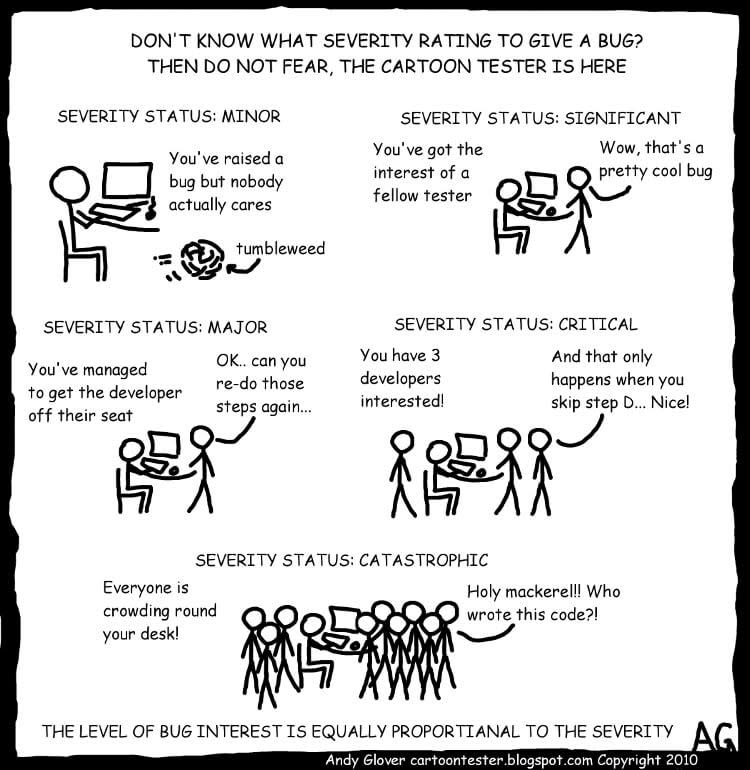 Severity is how austere a bug is! The severity of a bug is derived based on the effect of that bug on the system. It indicates the level of threat that a bug can affect the system. Severity is divided into levels, such as-

Realizing the Severity of a bug is critical from risk assessment and management point of view.

Priority is how quickly a bug should be fixed and eradicated from the website. Bug priority indicates the sense of urgency for dealing with a bug on our website.

Buggy software or a website may severely infect the roster, which is a result, can lead to a re-evaluation of risk and priorities, which turn out to be more time, and resource consuming. This is why Shift-left testing is trending in order to evaluate the risk and bugs by testing a website as early as possible. In shift-left testing, you implement website testing right from the requirement gathering phase. That being said, prioritizing a bug in the right manner goes a long way in planning your SDLC(Software Development Lifecycle). 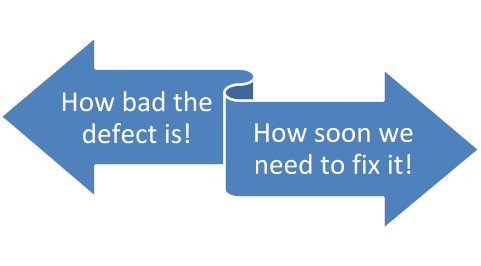 Bug Severity vs Priority! Who Does What?

Difference Between Bug Severity and Priority With Real Time Examples

If you are not aware of cross browser testing, it is a practice of evaluating the appearance and functioning of a website across different desktop and mobile browsers and browser versions.

Let’s say you are working as a website tester in a SaaS company, you are testing your website on Chrome and experience no issues with the website’s look and feel. However, once you switch your browser from Google Chrome to Internet Explorer then you realized that the text, iframes on pricing page look distorted. The buttons for buying the plans have disappeared along with the pricing you were offering based on different features that come under a plan. Due to which people may fail to understand what they are getting on what price? What’s more, they can’t buy it even if they somehow want to because the buttons are missing out.

High Severity because the pricing grid is not presented to the customer. Leading to a blocker in product purchase.

High Priority, because the issue needs to be resolved as soon as possible as it is a blocker for product selling.

Check this out: XCUITest Tutorial: A Detailed Guide To XCUITest Framework

Your website’s home page renders horribly in legacy browsers. The text is overlapping or logo fails to load. This is hampering the product’s functionality and user journey so the bug severity would be high. However, since we are talking about the legacy browser, it is not going to deliver a significant amount of visitors so it may be considered as a low priority.
Below is an example of wix.com in IE8. 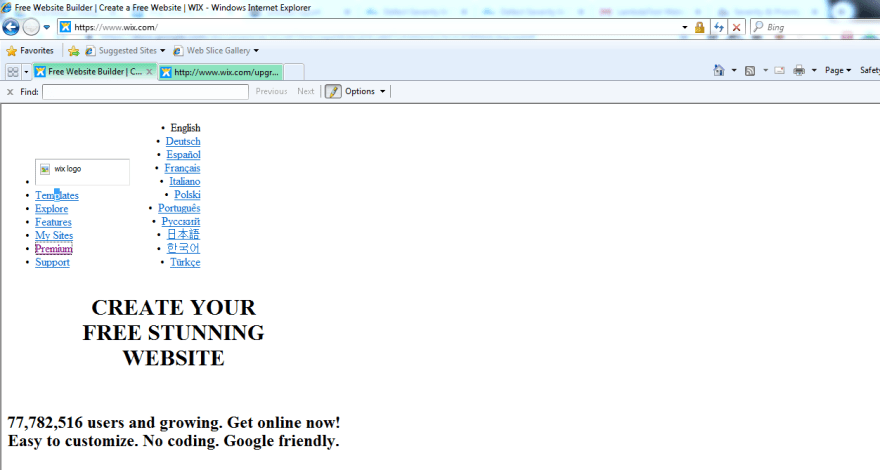 You’re trying to test the functionality of the website. The website, when summoned in the latest Google Chrome version, shows that the buttons are slightly overlapping with each other. Although, they are still clickable separately, however, the visual representation is getting disturbed.

Some alignment issues on the website are not a big issue. Although it doesn’t look nice, still the user will be able to enjoy internet surfing.

So you are testing a website’s privacy policy, or disclaimer and came across a typo error, or you noticed that the colour-font is not as per your website’s theme. It is not as it should be so it is a bug, however, since it is not hampering the functionality of your web-app, and also because it wouldn’t be noticed by the majority of users. It would be okay to keep it as low severity and low priority.

(Above mentioned examples are for demonstration purpose only. It is up to team only to decide the severity or priority of the bug.)

Did you notice the UI differences induced by the differences in browser’s rendering engines? Interesting isn’t it! But how do we go about testing our website or web-app on numerous browsers without installing them in our machine? The answer would be a cloud-based cross browser testing tool such as LambdaTest. LambdaTest helps you to perform browser compatibility testing on more than 3000+ browsers. It also offers an on-cloud Selenium Grid to fast track your automated cross browser testing effort.

→ Relay your development team that they need to consider high priority defects at the top of their list rather than high severity.

→ Be empathetic towards the customer and try to see the bug from their convenience point of view.

→ Consider the time that would take to fix the bug based on its criticality and verification time of the bug.

→ As a tester, try to understand the functionality of how a particular scenario or test case may affect the performance of the overall system before assigning the severity level of a bug. This involves the collaboration of a development team with the testing team.

→ As a product manager, while preparing for the next sprint, make sure you and your team are aware of the clear distinguishment between severity vs priority. So they don’t end up using the two terms severity and priority interchangeably according to their mood.

→ Don’t hesitate to take help of tools. There are bug tracking tools available in the market to help you keep your bug reporting in an organized manner. Also, if your website is working fine in Google Chrome then it doesn’t guarantee the same result in other browsers or browser versions too. Don’t miss out on cross browser testing tool such as LambdaTest.

Bug Reports Can Take You A Long Way!

Check out the user comments on the app on the app store. There is no successful app that has gotten a maximum of a 5-star rating. Remember, no software or tool is perfect. Zero bug development is a myth. You can test your system several times to make it bug-free, but execution environment is not in your hands. Therefore, collecting all the reported bugs and generating bug reports with precise values for severity and priority of a bug can shape your upcoming sprints in a more organized manner.

You cannot run away from bugs. They may always affect the performance of your system. So, the good practice is handling the severity of bug at the very first stage so that bugs can be handled at the initial stage and you can save system or software or website performance from getting down or halt. Another way is to create technical requirements at the initial level of coding; this can also help you to know the priorities and severity of the bug which you have to handle.

Check this out: Manual Testing Tutorial: A Comprehensive Guide, with Examples & Best Practices

In website development, the selection process of severity and priority can have drastic imputation on the overall performance of the system; and thus should be chosen wisely. It is vital to incorporate the two terms separately in your bug tracking process. When you have new teammates on-board then they need to communicate the difference in detail so they don’t end up being confused later on.

I hope this article helped you in determining the difference between a bug severity vs bug priority in detail. Let me know your thoughts in the comment section below.

Python NOT for Beginners ⛔ but for Professionals 😎

How to convert mp4 to mp3 using python

Once unpublished, this post will become invisible to the public and only accessible to Kirandeep Kaur.