In this session of the Testμ Conference 2022, we had Boni García, Visiting Professor, Universidad Carlos III de Madrid, as our guest speaker who joined Sudhir Joshi, Head of Customer Success at LambdaTest, to take a deep dive into developing end-to-end tests with Selenium 4 and Java. 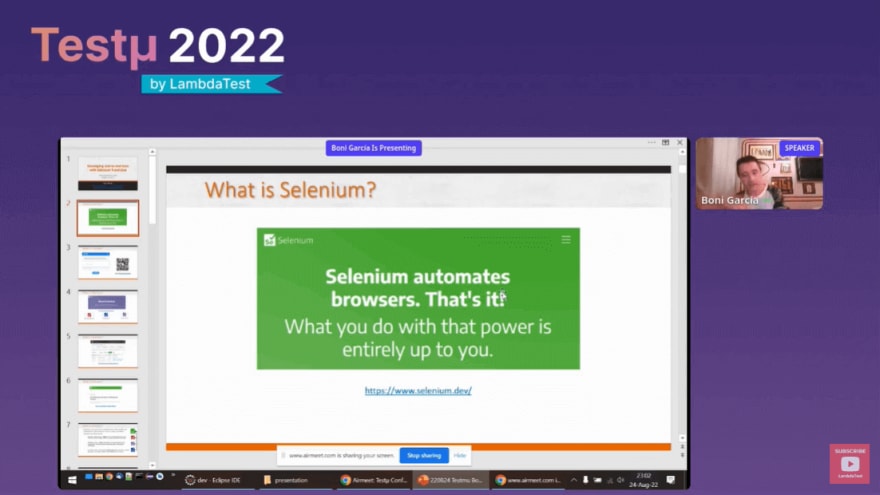 Boni starts this session by asking a question — What is Selenium? As per Boni, if we look at the documentation provided by Selenium, we see this motto — “What you do with that power is entirely up to you,” for which he informs his viewers that what you do with this power isn’t very up to you. 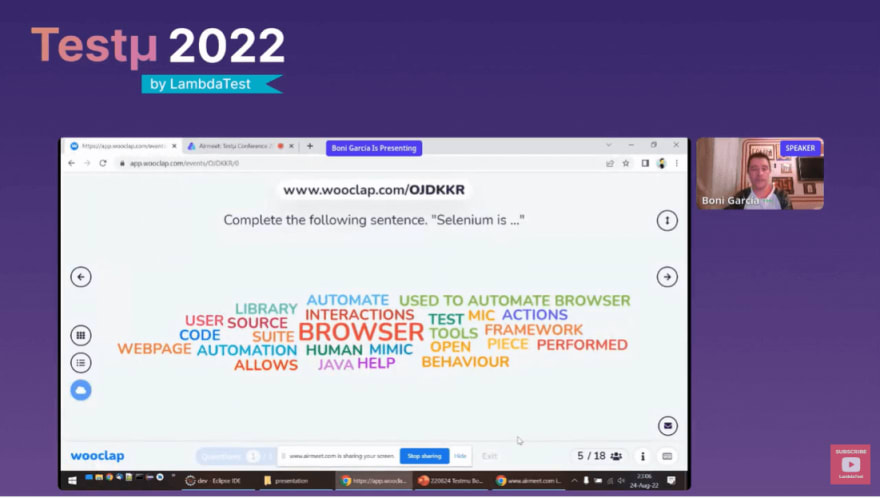 He then asks the viewers to answer the question in simple words to make this session more engaging. Boni then quotes different definitions of Selenium to define it in simple terms. He also addresses multiple answers shared by the audience to what they think Selenium is.

Moving forward, Boni defines what Selenium is in his own words. As per him, Selenium is an open-source umbrella project that enables the automation of web browsers, and it is composed of three elements:

Boni then takes up the important question — What is NOT Selenium? As per him, Selenium is neither a testing framework nor a library. He then asks the session’s main question: Why do I need to do testing with Selenium?

Boni talks about end-to-end tests as the first point to this question. He then mentions that we must first select a binding language for testing using Selenium. For this session, Boni selects Java as his choice of programming language. 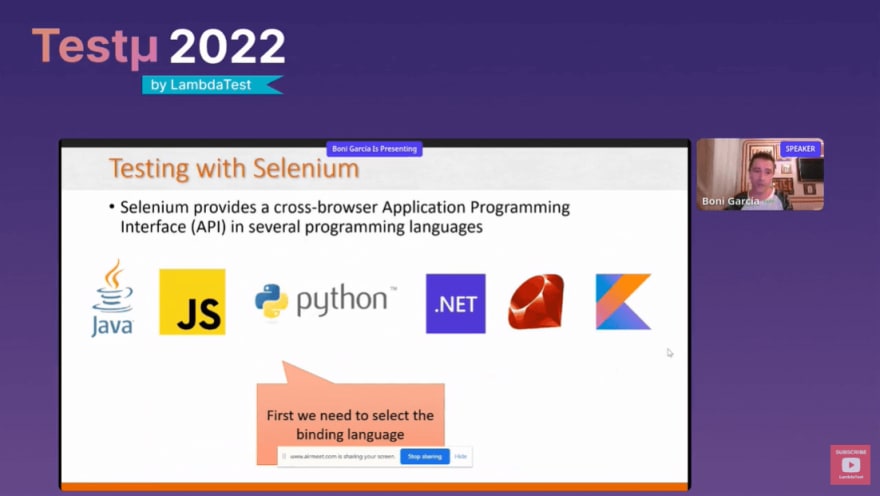 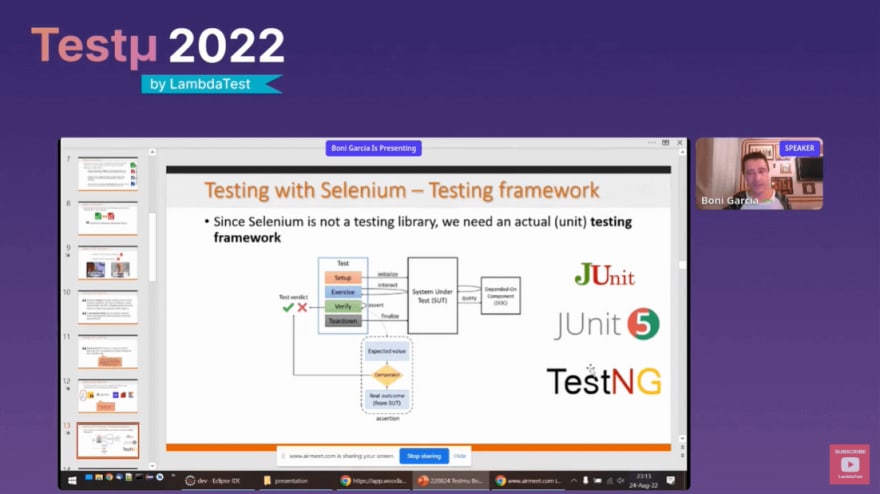 He then recommends selecting one or a combination of browsers to be driven with Selenium. Boni suggests that as we progress in end-to-end testing, we will need something more advanced, like a remote environment for a browser such as Selenium Grid or Docker. 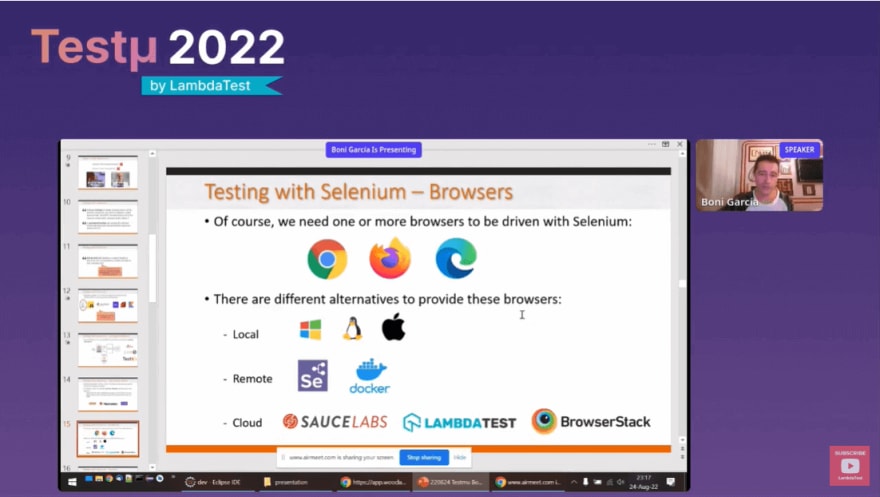 What is a Selenium Driver?

He then explains how a remote or a local driver works. According to Boni, a driver is a piece of software or a binary file that we need to put in the middle of the test using the Selenium window API. We need this software because Selenium WebDriver automates the browser using each browser’s native capabilities, offering a standard protocol to the test, the W3C Web Driver standard.

Boni then goes on to talk about the build tools. As per him, build tools are utilities used to automate the creation of software applications from their source code. 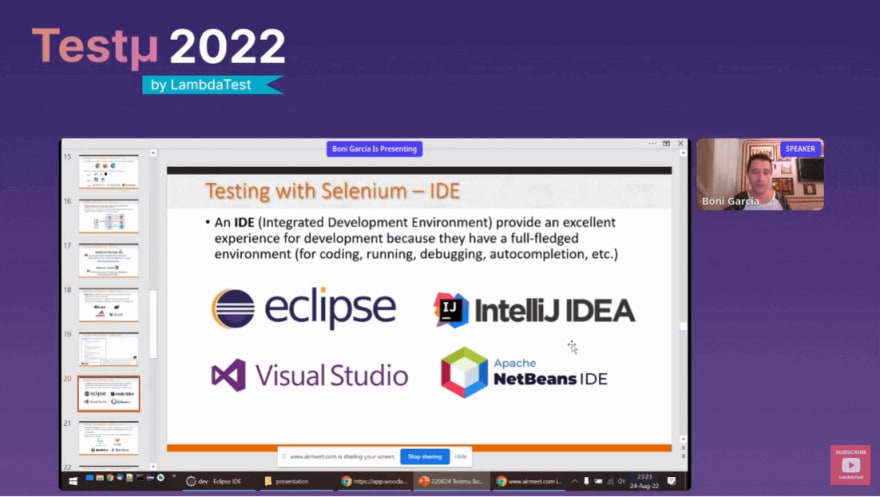 Along with this, he talks about choosing the right Selenium IDE. As per him, every IDE has its advantages, some of which are very advanced. Hence the process of selecting an IDE depends on your capabilities. 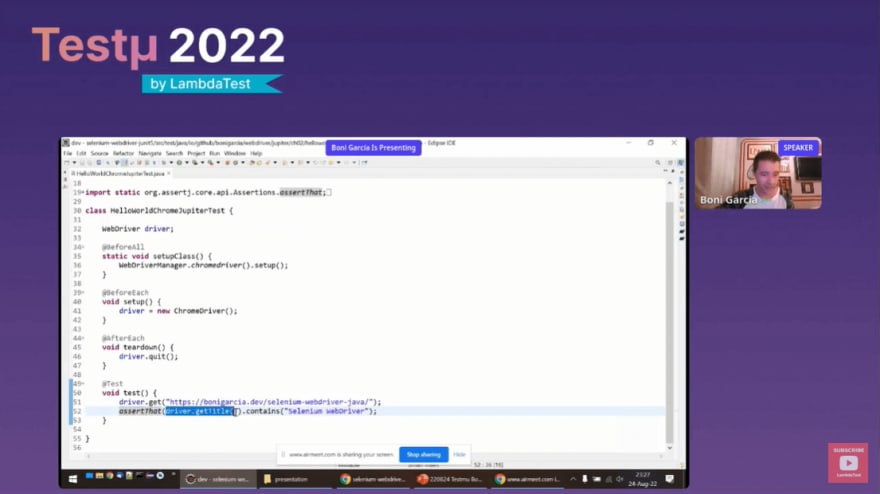 Moving forward, Boni showcases an example of what a Selenium WebDriver with Java looks like with the elements he has explained so far. He showcases a sample test run using Selenium Grid and Docker.

Boni concludes the session with a few takeaways. They are:

He further answered the questions put forth by the audience, where Sudhir Josi, Head of Customer Success at LambdaTest, took the initiative to ask them on the audience’s behalf.

It was indeed an informative session with Boni! The session ended with a few questions asked by the attendees to Boni. Here is the Q&A:

Does the WebDriver Manager work with Remote WebDriver?

**Boni: **Somehow, Selenium drivers can be used to support Selenium WebDriver by resolving the drivers required by the Selenium Grid. When you use a remote WebDriver, you don’t need to resolve the driver because it is supposed to be resolved along with the browser. That said, the WebDriver manager might help set up a Selenium Grid infrastructure.

Is implicit wait deprecated in Selenium 4?

Can we expect JUnit built-in with Selenium?

I recommend using it together with Selenium. However, that will not result in something out of the box if that’s the question. You can use any framework as per your preference.

Which test reporting tool/library do you love to use while running end-to-end tests with Selenium?

There are different reporting tools that I recommend. I don’t usually use a testing report because the output generated by Maven or Gradle is enough for me. But for large projects, having a good dashboard is good, which can help the reporting framework. You can also check out the shared repository to see how you can use other frameworks.