Automation frameworks enable automation testers by simplifying the test development and execution activities. A typical automation framework provides an environment for executing test plans and generating repeatable output. They are specialized tools that assist you in your everyday test automation tasks. Whether it is a test runner, an action recording tool, or a web testing tool, it is there to remove all the hard work from building test scripts and leave you with more time to do quality checks. Test Automation is a proven, cost-effective approach to improving software development. Therefore, choosing the best test automation framework can prove crucial to your test results and QA timeframes.

As per the State of open source survey, almost 37% of organizations now integrate test automation into their Continuous Integration and Continuous Delivery(CI/CD) process, enabling developers to instantly know whether or not the latest code change broke any aspect of the application after it’s deployed to production. When paired with the number of testers doing test automation testing with each sprint (40%), organizations have reported that more than 75% of their projects can perform test automation at least every two weeks. So, how often is test automation carried out in your organization? 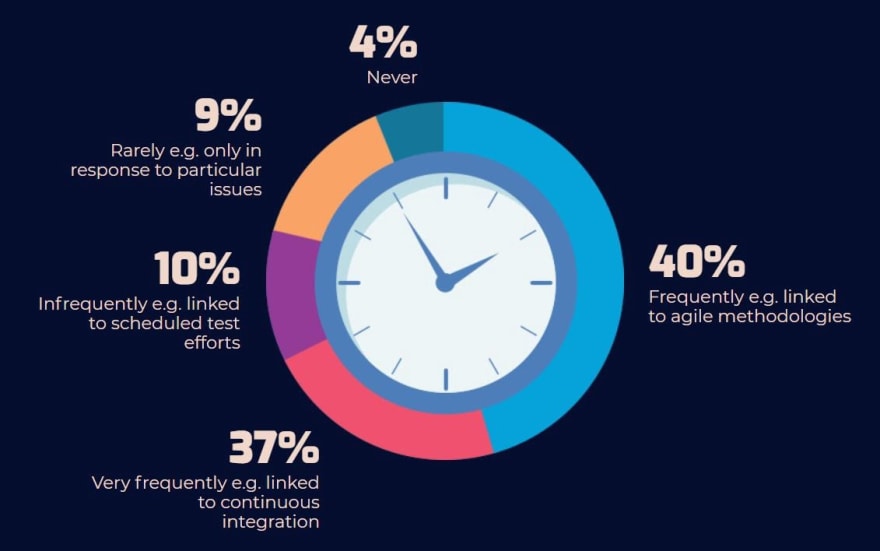 With the ever-rising demand for automation testing frameworks, it is no surprise that there are so many available out there. We have written down the best ones available in 2021 (in no particular order), along with what features they provide. If this could help you better your automation testing game, do not hesitate to give it a try!

Did you know? The CSS font-smooth property controls the application of anti-aliasing when fonts are rendered.

Selenium is considered one of the best test automation frameworks and needs no introduction. After 16 years of its inception, Selenium has made its name in the community in a way that it is often assumed that you already know what is Selenium if you are an automation tester. However, Selenium quickly expanded into four of its components within four years of coming into existence due to companies and people joining quickly to the project. This browser testing framework comes in five components:

2- Selenium Client API (to build tests in various other languages) 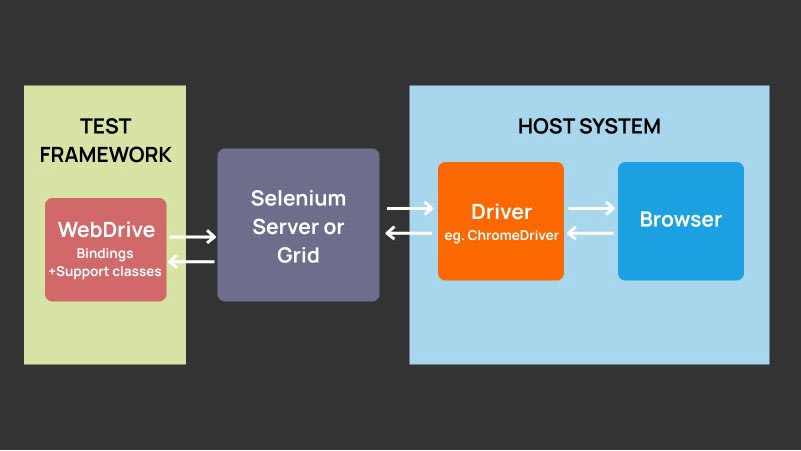 However, with the launch of the latest version of Selenium 4, Selenium has more cool and new things to offer.

Relative locators are new in Selenium 4.0, where the locator is relative to the previous element rather than absolute. The previous implementation was very fragile and could not work with dynamic content on the page, whereas the new implementation is far more robust. Also, this release marks a major milestone for NetworkInterceptor and a huge step towards realizing the dream of comprehensive browser automation and much more.

We hope you enjoy Selenium 4, and we can’t wait to see what you do with it!
#selenium4

This certification is for anyone who wants to stay ahead among professionals growing their career in test automation.

Here’s a short glimpse of the Selenium 101 certification from LambdaTest:

WebdriverIO is a popular and counted among the best test automation frameworks that work in both Webdriver protocol and Chrome Devtools protocol. It is based on Node.js and is open-source in nature. With WebdriverIO, you can perform Selenium automation testing with WebdriverIO either on the local system or integrate them with cloud-based solutions such as LambdaTest.

Even though the WebdriverIO is a new addition to the open-source community, it has collected a large gathering of GitHub users and boasts of an impressive GitHub star and fork count. When writing this article, WebdriverIo has 7.1k Stars and 2k Fork, with the latest version being v7.15.0.

You can go through the Selenium WebdriverIO tutorial to further deep dive into the subject.

Cypress’s landing page describes itself as “fast, easy and reliable testing for anything that runs in a browser.” Even though these are some solid commitments towards the users, Cypress has been able to keep up to its promise. This open-source platform gives a complete end-to-end testing experience with loads of features for performing Cypress automation testing. Cypress is fast and extremely efficient in the front-end testing department and runs on Javascript (one of the most popular web languages today) and is the reason for being among the best test automation frameworks list.

As per the State of JS Survey 2020, Cypress is one of the fastest-growing frameworks for JavaScript-based applications. The Cypress project is hosted on GitHub with 34.2k Star and 2k Fork. As of writing this blog, the latest version of Cypress is 8.6.0. 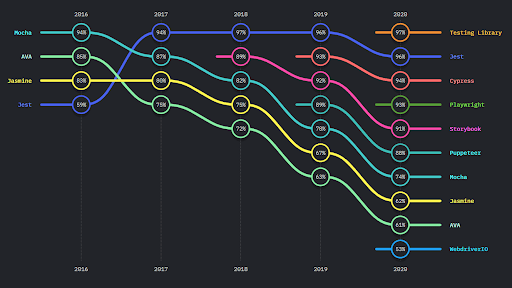 However, you can follow the LambdaTest YouTube Channel and stay up to date with more such videos on Cypress testing tutorial.

Hey! Did you know what CSS font-variant-alternates is? It is a CSS property that controls the usage of alternate glyphs associated to alternative names defined in @font-feature-values for certain types of OpenType fonts.

EarlGrey is an iOS native application testing framework. It works on the user interface of the application through its automation testing abilities. EarlGrey works with the XCUITest framework, and the tests are required to be written in Objective-C or Swift. Currently, EarlGrey is at its 2.2.1 version, and the newer version works with XCUITest and brings exciting synchronization features for testers working on iOS applications.

When writing this article, EarlGrey had 7.1k Stars and 2k Fork on GitHub, with the latest version being 2.2.1.

In addition to the above points, there are more compelling reasons to consider EarlGrey
Among the best test automation frameworks.

Another hero in the list of best frameworks for automation testing is Appium. Appium is an extremely popular framework that can be used to test native, hybrid, and mobile web applications. The official page of Appium is embellished with the following philosophy, “Appium is built on the idea that testing native apps shouldn’t require including an SDK or recompiling your app.” This software is open-source and can be used with your favorite tools and frameworks.

While functional UI tests are the standard, cloud-based cross browser testing tools, such as LambdaTest, provide innovative technology to support mobile app testing that mimics end-user test scenarios. This is especially useful for native mobile applications as iOS simulators, and Android emulators enable cross-platform compatibility and prove to be a huge time and money saver.

Serenity or Serenity BDD is an open-source library used for writing regression tests and acceptance tests. Serenity’s USP is its reports as they are very detailed and extremely informative. Serenity BDD reports also tell what requirements have been satisfied with the written automation tests in addition to what tests have passed or failed. Serenity is Java-based but also has a JS version called SerenityJS for front-end developers, which makes it among the best test automation frameworks.

When writing this article, Serenity had 581 Stars and 420 Fork on GitHub, with the latest version being v2.6.0 with support for JUnit 5.

Cucumber is among the best test automation frameworks that use the BDD language to create automation tests. BDD tests resemble the English language, where instead of calling out the syntax or command, we write English sentences. This, however, is converted to pure code behind the scenes. Initially developed for the Ruby programming language, Cucumber today supports a host of languages for Selenium automation testing with Cucumber and is counted among the best test automation frameworks. In addition, you can further leverage some of the Cucumber best practices to get the best out of the tool.

As per the State of open source survey, the choices of BDD practitioners are very different from the data. Cucumber is the leading option with 70% preference, followed by SpecFlow, with significant use for both TypeScript and JavaScript coders.

Citrus is a different type of automation framework than the ones discussed until now under the best test automation frameworks category. While the other tools work efficiently in the UI, integration, or end-to-end department, they often fail to impress when APIs or other communication channels need to be tested. For any project, communications are bound to happen over HTTP, REST, or JMS, and the Citrus automation framework helps us in this regard. Citrus, thankfully, can be integrated with virtually any messaging protocol or data format.

When writing this article, Galen had 1.4k Stars and 169 Fork on GitHub, with the latest version being 2.4.4.

However, you can also use LT Browser, a mobile-friendly checker tool that lets you test the website’s responsiveness across 50+ device viewports (including mobiles, tablets, desktops, and laptops).

Carina automation framework is one of the Java-based frameworks that can be used for mobile app testing (native, web, and hybrid), web app testing, API testing, and database testing. Carina uses the page object pattern to define the tests and run them on any platform with multiple threads. Carina is open-source and is “free forever.”

When writing this article, Gauge had 2.6k Stars and 300 Fork on GitHub, with the latest version being 1.4.2.

Sahi automation framework is the last in this list of best test automation frameworks that we will be discussing in this list. But why? you might ask. Because that’s what Sahi wants to be. Let me clarify. The motto of Sahi is, “When you have tried all the tools and still haven’t found the one that works perfect for your complex test cases, that’s when we come in.” Sahi wants you to try and test all the tools and then see how different and efficient it is.

Hey! Did you know? The @font-face Web fonts bookmarklet was created to facilitate web browsing by allowing users to preview fonts downloaded from any website.

So, here ends our list of carefully selected best test automation frameworks. I am emphasizing the word “carefully” as I have tried my best to give you options in the same field and tools that are different. All the tools listed above do not exhibit the same working principle. Some dominate in API testing, while some lookout for layout anomalies. Some are business language based while some use hardcore programming. Some are end-to-end, while some are acceptance and the variety is intense.

I am not surprised by the way these tools differ in functionality and their structure. Why does a tool get invented? Some programmers can’t fulfill their needs with certain frameworks and hence need new tools. Therefore, I recommend going through every tool in the list above to know about automation testing and its progress in this department. I hope this list is sufficient and will help in your future endeavors.

I Made React Router v6 Type-Safe

Once unpublished, this post will become invisible to the public and only accessible to Harish Rajora.