A little while ago, whitep4nth3r reached out on Twitter asking for support from men for a better future. I didn’t know why, but I signed up head first, because who wouldn’t want a better future?

I didn’t know what sparked the plea, but I could have guessed. Men being assholes, live on stream. I was watching her stream again today, when “THAT guy” striked again. Somehow, a dude thought it would be acceptable to compliment someone based on looks. I was stunned. My first response was eaten away by the obscenity filter in the chat.

I hate the fact that I live in a world where this needs to be said. And we’re all part of the problem! Because we don’t say it often enough - “Don’t be THAT fucking guy!”.

You know exactly what I’m talking about. 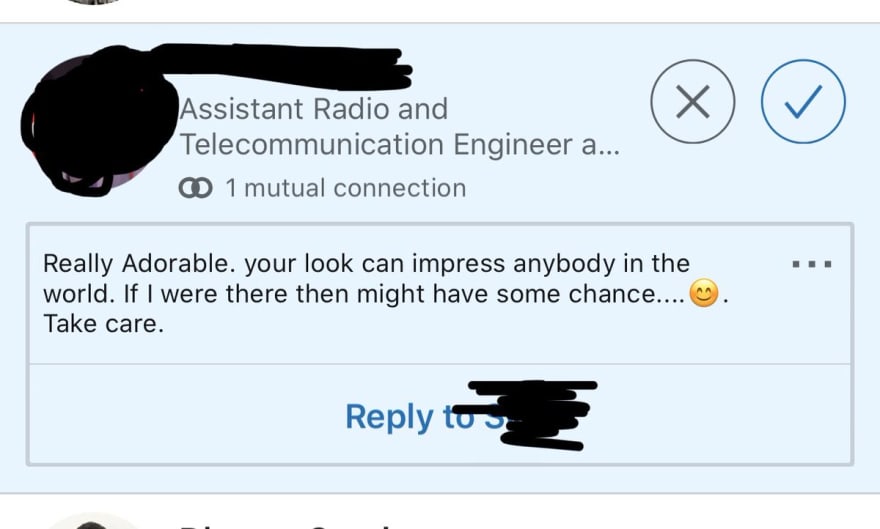 THAT guy that’s going to “slide into your DMs”. Social media networks are not dating apps! If there were no dating apps left in this world, it still wouldn’t be OK to make unwanted advances in there. Or send dick pics. Tech isn’t there to enable you to be a bigger sleazeball.

@Dynavolta Me: what he said was so sexist and racist

WM: it was so sexist

Me: exactly bc if you saw it you wouldn’t be the star victim and are avoiding your own role and implication in these systems

THAT “I’m not a racist” guy. The moment you spew some shit and then try to defend it with “I’m not a racist”, you are. Just don’t spew that shit. Forget about making excuses. No excuses are needed if you really weren’t making a racist comment.

THAT guy that thinks only other dudes can code. I swear everyone has this thing called a brain. And I’m 100% sure brainpower is in no way connected to gender. Programming uses your brain but is also not a skill that in any way relates to gender. So why would you keep on assuming only other “dudes” can code better than neanderthals like you?

The list goes on, and there are so many instances of “THAT guy”. The post is triggering enough as it is. It burns my soul to write about all the shitty things “dudes” online do because they hide behind anonymity. Let’s all agree right here and now that if you wouldn’t say it in person, in front of a room full of people, just don’t say it online. FFS!

There is absolutely no context, online or not, where it’s OK to be abusive, misogynistic, racist or in any other way disrespectful to another human being! No, not even if it’s “a joke”. Seriously!

And even if you’ve read all this and think to yourself: “I wasn’t any of those guys”. Were you actually respectful? I know I’m not always respectful. So I pledge to do better, right here, right now! How about you?

We’ve all seen “THAT guy” regularly, you might even know that guy, but we somehow convince ourselves to not say anything. Because it’s uncomfortable. Or because we’ve convinced ourselves that it doesn’t really affect us. But it affects “someone”. It affects someone quite a lot! If you saw anyone being treated this way on the street next to you, you’d speak up, right? So why is it OK if it happens online? If the past year taught us anything, it’s that more and more of our life happens online.

Let’s all treat online with the same standards, especially when it comes to harassment, bullying and discrimination. I understand confrontation is hard. But reporting or education work just as well as confrontation.

If you’re “THAT guy”, but somehow you didn’t want to take my word for it, check out https://unbreak.tech/. There’s a lot of other people that would like to have a word with you!

Alex Lakatos 🥑
Made http://puns.dev. Half of @DevRelAvocados. Reformed #JavaScript person, #DevRel 🥑Manager at @fidelhq by day, @mozillareps & @moztechspeakers by night.
The Accidental Public Speaker or How I Got Over My Fear of Public Speaking
#speaking #devrel #beginners #career
How to Get Your First Job in Developer Relations
#devrel #speaking #writing #career
10 Things I Wish I’d Learned Sooner After Being a Developer for 10 Years
#career #beginners #codenewbie #leadership

Once suspended, lakatos88 will not be able to comment or publish posts until their suspension is removed.

Once unsuspended, lakatos88 will be able to comment and publish posts again.

Once unpublished, all posts by lakatos88 will become hidden and only accessible to themselves.

If lakatos88 is not suspended, they can still re-publish their posts from their dashboard.

Once unpublished, this post will become invisible to the public and only accessible to Alex Lakatos 🥑.

Thanks for keeping DEV Community 👩‍💻👨‍💻 safe. Here is what you can do to flag lakatos88:

Unflagging lakatos88 will restore default visibility to their posts.