JSON Web Token or JWT is an authorization technique. It is for creating secure web applications.

JWT generally creates a secure way to transfer information between two parties as a JSON object, here the two parties can be a server and a client.

In this picture, client makes a post request with { email: email, password: password } to login. The server takes the request then check the email & password then returns a token called JSON Web Token only if email & password both are correct. Then client will store the JWT(token) inside Local Storage or Session Storage.

Next time client sends a request with JWT(token) attached to get the response. The server verify the token if the token is correct then the server send the response back to the client.

To identify an authenticated person, you just need to put JSON Web Token in the API end point.

A Header is generally consists two parts, type of the token and the hashing algorithm used. For example,

HS256 signing algorithm being used in the token and type is JWT. Then the header is Base64Url encoded to make first part of the JWT.

The second part of JWT called Payload, the amount of data you want to include into JWT.

Then the payload is Base64Url encoded to make second part of the JWT.

The last part of JWT is a signature generated based on the Header and Payload. The signature used to verify the JWT is valid or not and the message wasn't changed along the way.

For example, if you want to use HMAC SHA256 algorithm, the signature will be created in the following order,

You can encode and decode if you put all together. Go to https://jwt.io/ 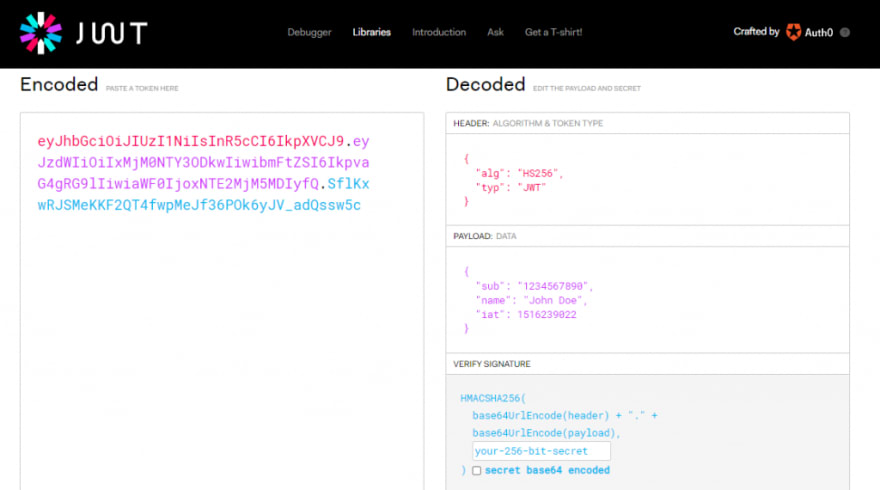 I made a 'new tab' browser extension/theme