Wannacry is a ransomware that utilized the EternalBlue exploit to propagate through the targets network and attacked outdated Windows computers globally in May of 2017. WannaCry was a multistage attack starting with a dropper which unpacked a payload onto the targets system under the right conditions. Once the files were encrypted, the threat actors demanded a ransom of $300 worth of Bitcoin. If the ransom is not paid in a specified amount of time, the ransom is increased to $600. This attack infected around 230,000 computers across 150 countries. Marcus Hutchins later discovered a kill switch that stalled the spread of the attack. Click here to view the full analysis report. 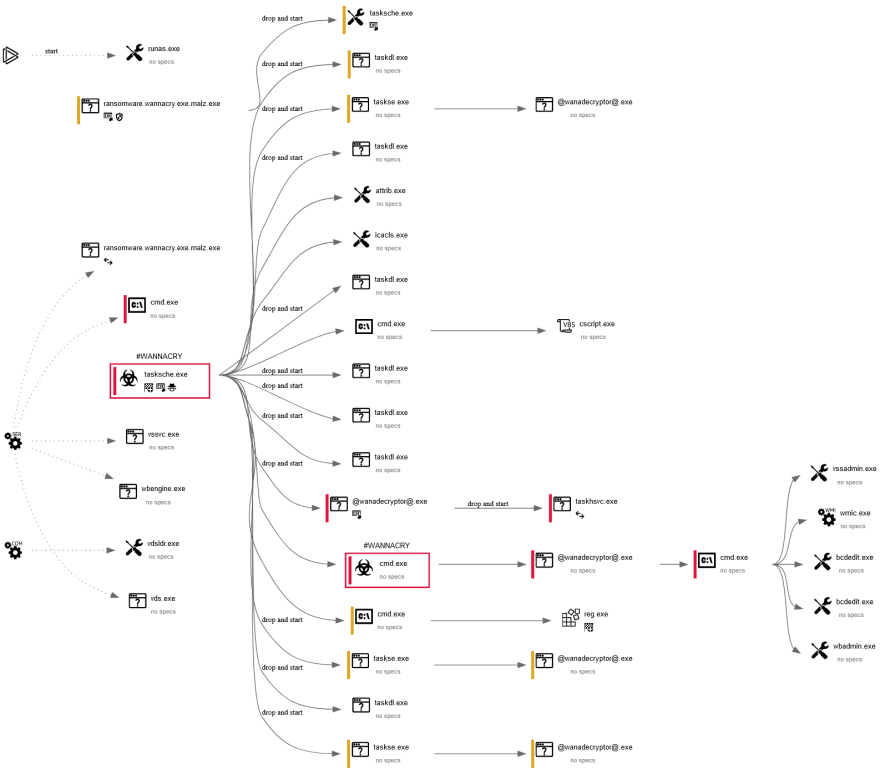 Executable can be found in the .rsrc section of the dropper executable.

Fig.3 Image of executable in the .rsrc header of the dropper. 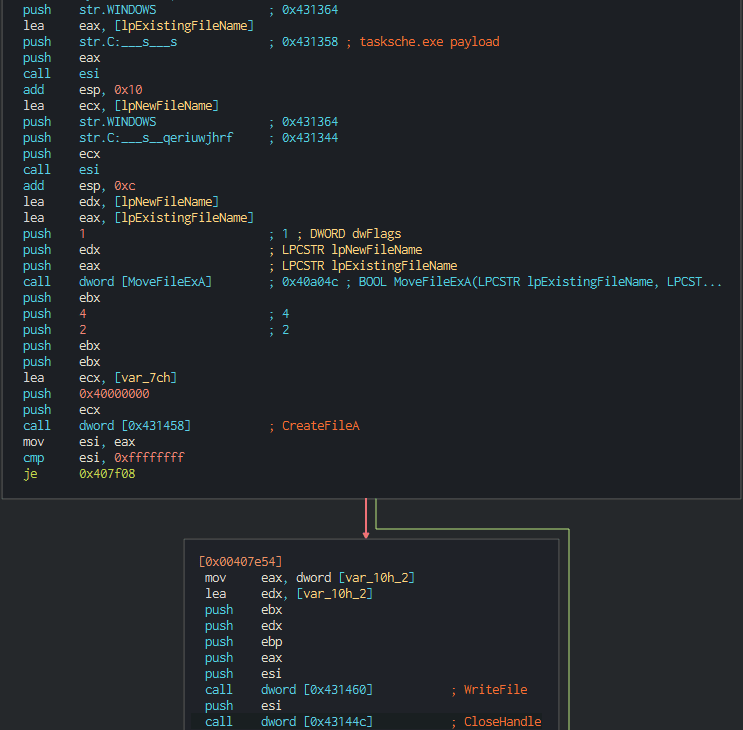 Found a URL that the dropper tries to communicate with at the start of it's execution. 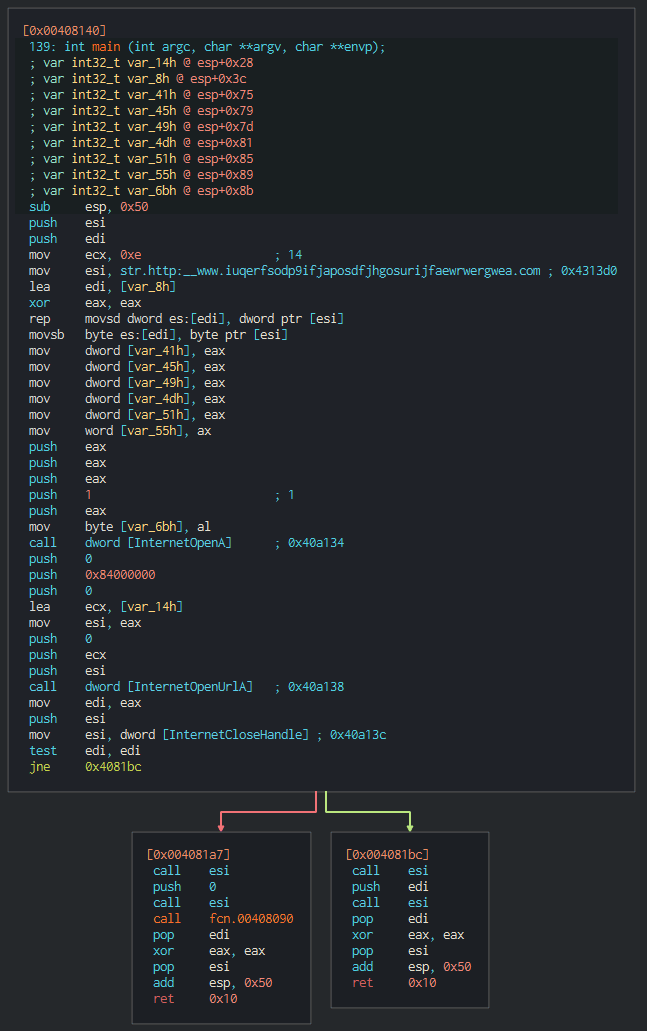 A few imports of interest: 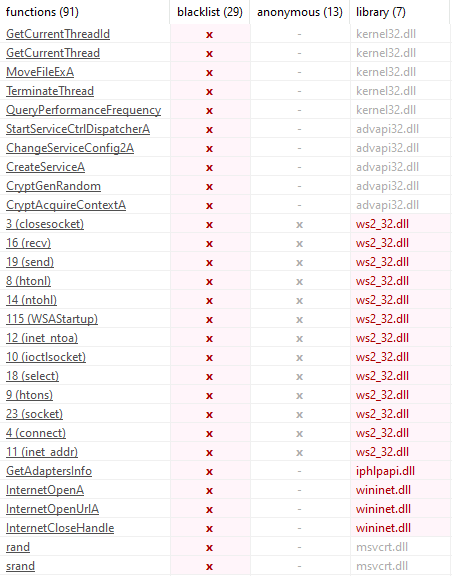 Fig.6 Imports of interest in the dropper.

Addresses to the bitcoin wallets can be found in the function starting at address 0x00401E9E within the tasksche.exe executable. BTC addresses are randomly selected.

Dropper tries to reach out to the suspicious URL.

If the connection to the URL fails, the program proceeds and pushes two arguments to the stack <PATH_TO_WANNACRY> and -m security which are then passed as parameters to the CreateServiceA function. The strings mssecsvc2.0 and Microsoft Security Center (2.0) Service are also pushed to the stack in preparation for the creation of the service. The program proceeds to create a service named mssecsvc2.0 with the display name of Microsoft Security Center (2.0) Service. Below are images of the service being prepared and the service after creation. 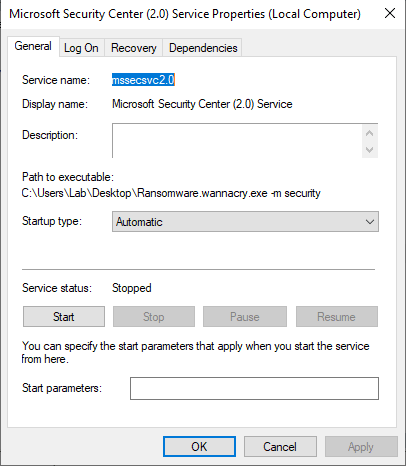 After the creation of the service the payload attempts to connect to a range of IPv4.

Fig.10 Service attempts to reach out to a range of IPv4.

A reference to the payload can be seen being pushed to the stack along with another string of interest can be found stepping through the dropper in x32dbg.

The payload is later unpacked on to the system in the C:\Windows directory and is executed. 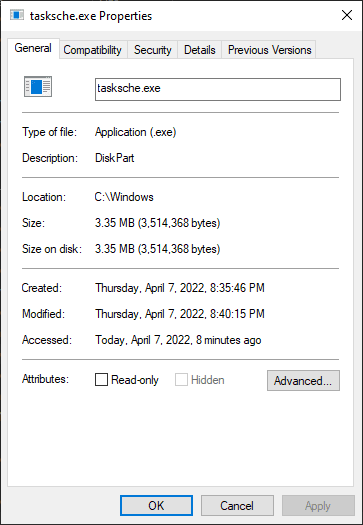 Fig.12 Payload is unpacked by dropper.

The payload generates a string based on the host name of the system and creates a folder named after the generated string in the C:\ProgramData directory. After the creation of the directory a copy of the payload is moved to the directory.

Fig.13 Payload generates random string based on the system name, creates a folder in the C:\ProgramData directory with the generated name and copies the payload to the generated directory.

Along with the creation of the new directory a service is also created with the same generated name as the directory which uses cmd to execute tasksche as a persistence mechanism. 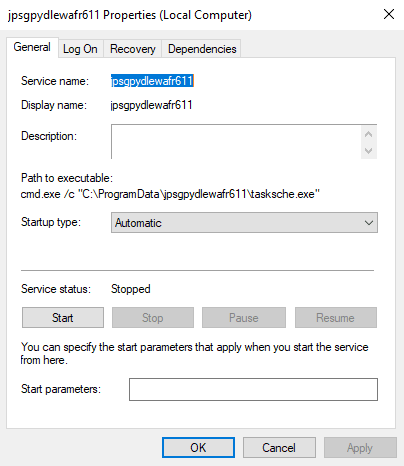 Fig.14 Service is created with the same name as the generated string.

A registry named WanaCrypt0r and registry key named wd are created with the key value set to the newly created directory in C:\ProgramData\<RANDOMLY_GENERATED_STRING>.

After the payload has executed the @WanaDecryptor@.exe executable is dropped along with various other files in the same directory as the payload's execution and creates a shortcut to the executable on the Desktop. 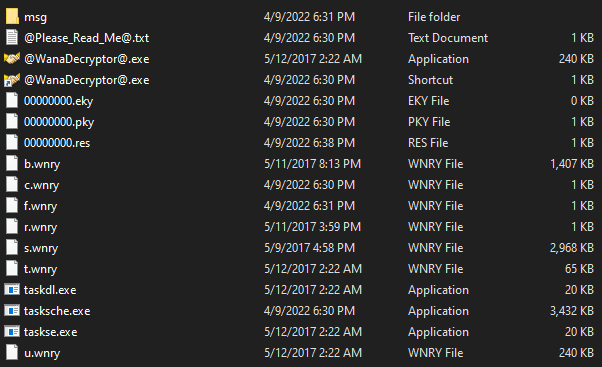 Fig.16 Files dropped from payload after encryption process has begun.

Lastly, the system background is changed and a GUI of the @WanaDecryptor@.exe is displayed. 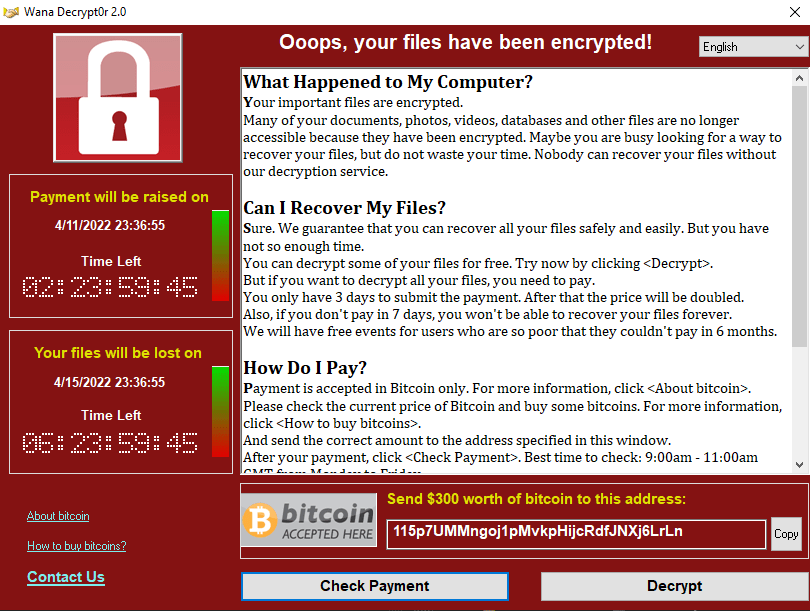 Payload attempts establish contact with a range of IPv4 addresses.

Payload is unpacked on to system in C:\Windows.

(Note) During the debugging process, there was a mention of a file in the directory C:\Windows named qeriuwjhrf but the file was never created.

Creation of files following the execution of the payload in the same directory as the execution. Along with files ending in the .WNCRY extension.

Once suspended, l0wk3y will not be able to comment or publish posts until their suspension is removed.

Once unsuspended, l0wk3y will be able to comment and publish posts again.

Once unpublished, all posts by l0wk3y will become hidden and only accessible to themselves.

If l0wk3y is not suspended, they can still re-publish their posts from their dashboard.

Once unpublished, this post will become invisible to the public and only accessible to L0WK3Y | I.A.A.N.

Thanks for keeping DEV Community 👩‍💻👨‍💻 safe. Here is what you can do to flag l0wk3y:

Unflagging l0wk3y will restore default visibility to their posts.