Here are the links:

Today we’ll look at the next data structure that flows from linked lists and common arrays: the stack.

What is a Stack?

Let’s make a couple of other observations about our pancake stack before we start coding.

Getting to the Code

Similar to how we set up the Linked Lists, we’ll need two classes for our stack:

1) a class named “Node” that will create the nodes of information that will go into our stack. The nodes are our pancakes!

Here’s our skeleton so far:

Let’s start adding threw easy methods to get us going. We want a method to find out if the stack is empty (isEmpty), get the current length of the stack (getLength) and peek at the top pancake (peek).

for isEmpty all we have to do is see if there is a “top”. We can do this by returning the boolean value to the expression this.top === null

for getLength, we’ll just return the size property which we already initiated in the constructor.

For peek, our constructor provided us with a "top" property, so we just have to return the data in that property to be able to peek.

Let's look at our code now after having added the isEmpty(),getLength() and peek() methods:

Ok, that much is done! Now let’s look at this picture to figure out what two methods will form the meat and potatoes of our stack implementation. Let’s look at the picture below: 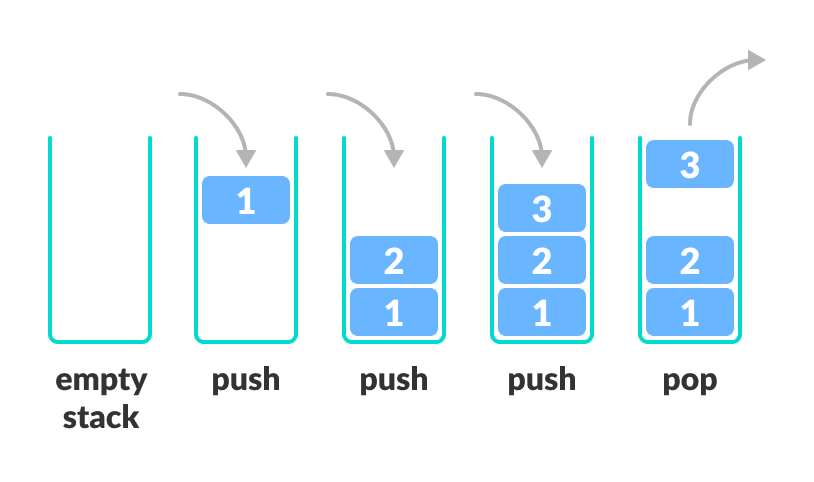 Starting at the left of the picture above, we see an empty stack. To add a node, we need a “push” method. To remove a node, we’ll need a “pop” method (Does this remind you of regular arrays in JavaScript?)

Let’s do one method at a time:

To code out the “push” method, here’s what we’ll need to do:

On to our next method: pop()

For pop, we want to remove the top node. Here’s how we'll accomplish that:

Now let’s put the methods we must wrote back in our LinkedStack class:

And there you have your basis stack data structure implementation. Next time, let’s have a look at a common algorithm asked in relation to stacks.

*One interviewer gave me a standard to achieve: be able to do the problems of medium-difficulty on Leet Code. The problems of high-difficulty are rarely asked. He also noted that, if LeetCode is too hard, you could start with Hacker Rank which tends to be a bit easier than LeetCode.

1 line of code: How to convert \newlines to <breaks />