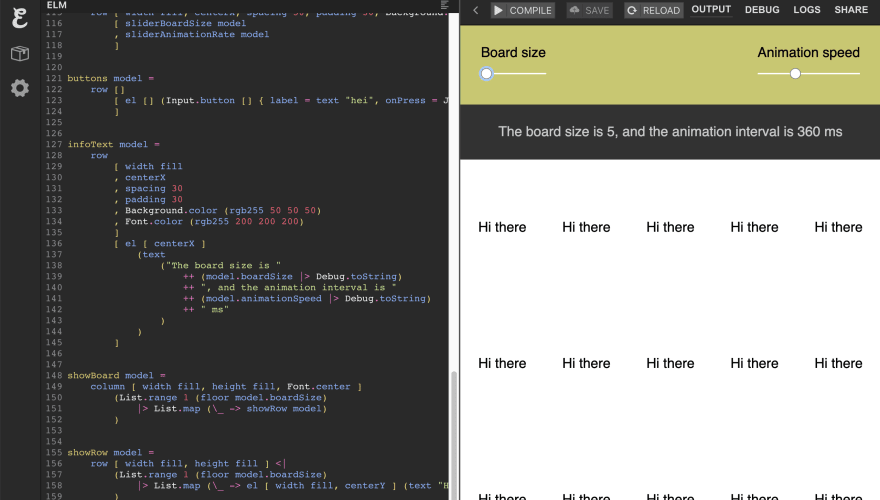 I made a React project a few months back that I eventually want to remake in Elm: https://kristianpedersen.github.io/knights-tour-react/

Basically, you click a chess board position, and the program finds a valid sequence of moves where the knight visits every position on the board.

I'm happy with the concept and interactions, but the visuals need a lot of work.

Especially the board being positioned all the way to the left looks weird, and somehow in my caffeine-crazed coding bonanza, I managed to get the SVG lines to resize, but a "fix" stopped the board from resizing. :D

Also, the colors and borders make it look like it was made 15 years ago.

Elm-ui is much nicer to read

I touched upon this in my previous quick elm-ui encounter, but CSS can be difficult.

In my case, struggling with CSS is mostly my own fault for not bothering to learn it properly.

Still though, here's a centered div:

Here's my elm-ui program from day 7:

There's just a lot less noise in the second example. Now, if this is true in such a small example, imagine how this adds up.

I'm still an elm-ui beginner. I had some problems initially that happened because I provided the wrong type annotations.

Once I removed them, the errors went away too, so today is an automatic type inference day.

The code for making a slider in elm-ui is kind of long, to be honest.

attributes is a record that contains the info I would want in a smaller slider function.

The sliders for the board size and animation speed now look nicer, instead of repeating the whole mess above twice:

Panel for the controls

The two sliders then get included in a "nav bar", which looks like this:

What's there to say? It's a full-width row with two sliders in it. elm-ui code is just so nice to look at! <3

Then underneath the controls, I wanted some info text to be displayed:

Honestly, I just want to watch some Netflix right now, so I didn't bother doing the board properly with the letters and numbers. I'll do that tomorrow.

For now, it expands and contracts along with the board size slider, which I think is pretty cool. :)

The main fullscreen container, and the view function

Element.layout is the topmost level in this elm-ui application. In my case, it just takes a column that contains everything.

I'm using map, because each of the elmUiSections, ([controls, infoText, showBoard]) take the model as their argument.

I could have also written this:

But that kind of needless repetition just puts me asleep.

The "buttons" function didn't work in this list. Lists can only consist of items of the same type, and the button is a different type because of its onPress message.

This is a very standard Elm setup. I'd definitely change the Msg names, as they're not really clear. SliderBoardSize, SliderAnimationSpeed and ButtonBoardSize would be better names for me.

Also, almost at the top, rather than exposing so many individual things from Element, I think I would just expose all.

This was my 2nd time using elm-ui. Type annotations gave me some trouble to begin with, but other than that, I must say that it feels really intuitive.

I'm just going to be honest and say that it would have taken me a lot more effort to make today's project in CSS.

Is PostgreSQL a worthy alternative to Microsoft SQL Server?

Once suspended, kristianpedersen will not be able to comment or publish posts until their suspension is removed.

Once unsuspended, kristianpedersen will be able to comment and publish posts again.

Once unpublished, all posts by kristianpedersen will become hidden and only accessible to themselves.

If kristianpedersen is not suspended, they can still re-publish their posts from their dashboard.

Once unpublished, this post will become invisible to the public and only accessible to Kristian Pedersen.

Thanks for keeping DEV Community 👩‍💻👨‍💻 safe. Here is what you can do to flag kristianpedersen:

Unflagging kristianpedersen will restore default visibility to their posts.