In this tutorial, you are going to learn about QuestDB SQL extensions which prove to be very useful with time-series data. Using some sample data sets, you will learn how designated timestamps work, and how to use extended SQL syntax to write queries on time-series data.

Traditionally, SQL has been used for relational databases and data warehouses. In recent years there has been an exponential increase in the amount of data that connected systems produce, which has brought about a need for new ways to store and analyze such information. For this reason, time-series analytics have proved critical for making sense of real-time market data in financial services, sensor data from IoT devices, and application metrics.

This explosion in the volume of time-series data led to the development of specialized databases designed to ingest and process time-series data as efficiently as possible. QuestDB achieves this while supporting standard ANSI SQL with native extensions for time series analysis.

Apart from that, QuestDB also makes the syntax easier by implementing implicit clauses. It also includes a random data generation feature which is extremely useful for exploring the functionality of the database as well as in database testing. Although there is much to talk about QuestDB’s SQL dialect, in this tutorial you will learn about SQL extensions.

Throughout this tutorial, we’ll be using two data sets. The first one is taxi trips data for New York City for the month of February 2018. It contains information about the number of passengers, trip fare, tip amount and the start datetime of the trip. You can find out average earnings per number of passengers, tipping behaviour of NYC taxi riders, busiest times of the day, and so on.

The second data set contains weather information for 10 years starting from 1st January 2010 to 1st January 2020. This dataset contains information about temperature, windspeed, rainfall, depth of snow, visibility, and more. You can use this data to analyse how the weather patterns emerge over long periods of time. You can also compare weather during the same time of the year for different years. To get started, you can install the aforementioned data sets using the following shell script:

While implementing ANSI SQL to the greatest extent, QuestDB has introduced some time-series specific SQL extensions to enhance performance and query reading and writing experience of the database users and developers. Let’s look into all of the SQL extensions one by one.

A time-series database isn’t complete if it doesn’t provide a method to search across time. In QuestDB, you can partition tables by time intervals. Each partition will be saved in a separate set of files on disk. To provide a relational database-like optimization of pruning partitions, QuestDB offers the feature of Timestamp search.

This SQL extension finds the latest entry for a given key or combination of keys by timestamp. The functionality of LATEST BY is similar to functions like FIRST, FIRST_VALUE, etc. which are available in traditional relational databases and data warehouses.

In a relational database, you’d either have to first find out the latest timestamp and using a subquery find the farePlusTip amount for the passengerCount, or you’d have to use one of the aforementioned analytic functions like FIRST_VALUE. QuestDB makes life easier for database users and developers by creating a new clause for serving the purpose of finding the latest records per group.

In the following example, you will see that by using LATEST BY clause, based on the passengerCount, we can find out what the farePlusTrip amount was for the latest trip completed.

This is another extension that is optimal for time-series data as it allows the grouping of data based on timestamp without explicitly providing timestamp ranges in the where clause. You can bucket your data into chunks of time using this extension.

In regular SQL, you’d need to use a combination of CASE WHEN statements, GROUP BY clause, and WHERE clause to get similar results. In QuestDB, SAMPLE BY does the trick. To use this SQL extension, you need to make sure that the table has a designated timestamp column.

In the following example, you’ll see the data is sampled or grouped by a day using 24h as the SAMPLE_SIZE in the SAMPLE BY clause. Depending upon the frequency of data ingested into the table, you might need to adjust the size of the bucket by adjusting SAMPLE_SIZE. 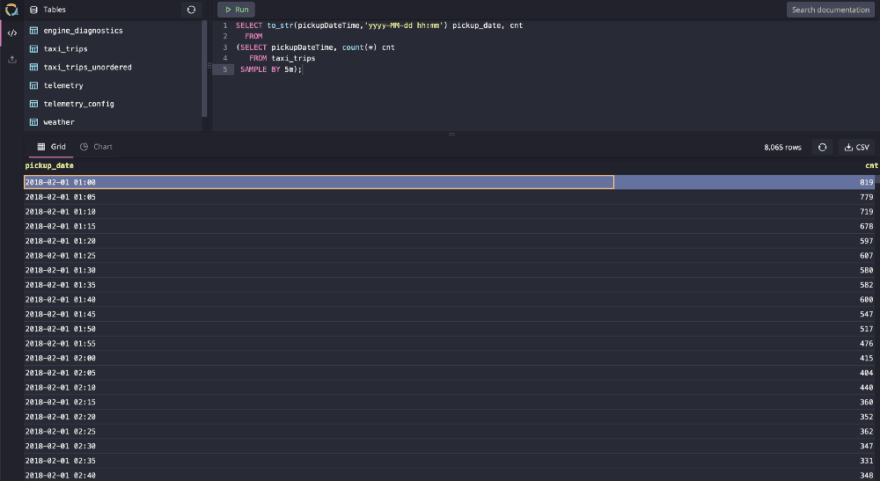 It is common in time-series database to have really low granularity. Hence, it is common to have data grouped by intervals of time ranging from seconds to years. Here are some more examples demonstrating how to go about using the SAMPLE BY clause for different sample sizes:

Changes to the usual SQL Syntax

Apart from the SQL extensions, there are a few changes to the usual SQL syntax to enhance database user experience. The changes are related to GROUP BY and HAVING clauses. The idea behind doing this is to simplify query writing, improving readability, and ease-of-use of the SQL dialect while Reducing SQL verbosity.

Because of the widespread use of aggregation functions in time-series databases, QuestDB implicitly groups the aggregation results to make the query writing experience better. While GROUP BY keyword is supported by QuestDB, it would not make any difference to the result set if you include it in your query or not. Let’s see an example:

As HAVING is always used only with the GROUP BY clause, HAVING clause automatically becomes implicit with an optional GROUP BY clause as mentioned above. Let’s see an example for this too:

QuestDB goes a step further by making the SELECT * FROM phrase optional. This one really helps reduce verbosity by a lot when there are nested subqueries involved. In QuestDB, just writing the name of the table and executing the statement will act as a SELECT * FROM TABLE_NAME statement. Please look at the example below: 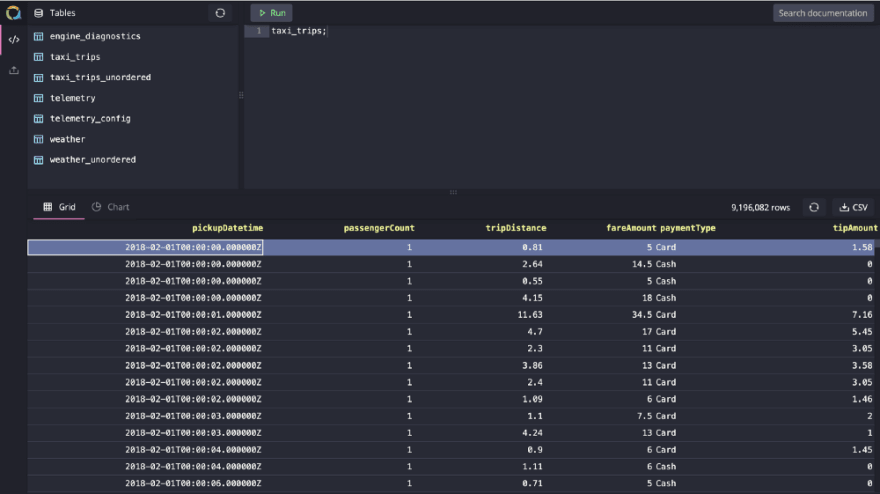 All of these improvements help reduce the effort required to write and maintain queries in a time-series database like QuestDB at scale.

In this tutorial, you learned how QuestDB supports SQL and enhances performance and developer experience by writing custom SQL extensions specially designed for time-series databases. You also learned about a few syntactical changes in QuestDB’s SQL dialect. If you are interested in knowing more about QuestDB, please visit QuestDB’s official documentation.

This tutorial was originally published on Medium.