Game Quotes is one of my oldest projects. It was launched back in 2013 as a small side project. At that time there was a site similar to what Game Quotes is now: an archive of funny, inspiring or awfully weird quotes from video games. I loved browsing through the archives, but the site seemed abandoned, as no new quotes were added over months. Today, the old archive is gone and with it a handful of great content. Besides that archive, there was no other place on the internet where you could find curated quotes from video games. Game Quotes was born.

After switching from Wordpress to a custom Laravel application in 2013, the site was basically in a maintenance-only mode. I rarely added new games and only a couple of quotes through the year. The system was first built with Laravel 4.2, which ran out of support and maintenance years ago. Development of the site took quite a while because I had to do so much stuff entirely on my own. But I learned a lot and then the site launched successfully. The following is a screenshot of the site displaying some video game quotes. 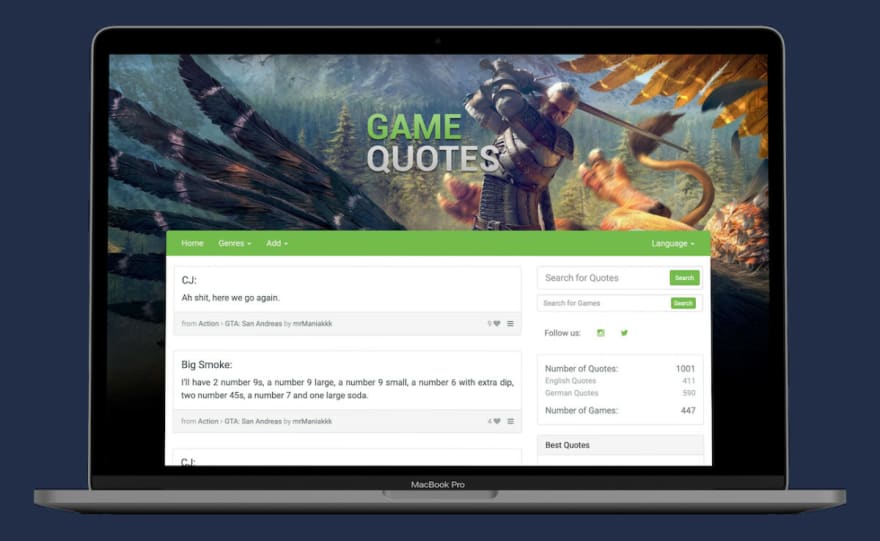 I started rebuilding the website with a newer version of Laravel, because the framework made some significant changes, so upgrading was not that easy. Around 2016 I started working on Game Quotes 2 and invested a lot of time into it. Unfortunately, I was too motivated and wanted to build a very sophisticated new site, with some community features like friend requests, teams and chat. Video game quotes should be translatable, and I built a large admin dashboard.
The relaunch was too sophisticated, I spent too much time with details and was just exhausted after some time. Burnout. Game Quotes had to wait, I abandoned the new version, and the old site became a pile of old technical debt. Laravel 4.2 had literally no supported packages anymore and adding new features was risky as I had no tests at all.

Refactoring or Rewrite from scratch?

At the end of 2020 I thought a lot about the future of the project. The old version was unmaintainable, difficult to deploy, and I wasn't motivated to work on it any further. I asked myself a very essential question: does it make sense to refactor the application and slowly move to a newer version of Laravel, or would it make more sense to just start from scratch and port the existing content to the new system?

Refactoring is a long and sometimes painful process. If you are not careful enough, you end in a deep hole of code chaos. I published an article with tips for refactoring code last week. Reading over the list of tips I collected, it became clear pretty fast that it would be too much work to refactor Game Quotes and move to a fresh foundation.

Rewriting, on the other side, was a lot of work too, because you would have to build everything from scratch and then port the old content. However, I am used to the latest versions of Laravel as well as the frontend stack with Tailwind CSS. I am able to build a custom application in a matter of days.

In February 2021 I made the final decision to throw the old Game Quotes into the trash and start from scratch. I set up Laravel 8 based on my Docker stack together with a minimal Tailwind configuration for the frontend, and then started porting the content.

After two weeks of work, I had the first fully working version of Game Quotes based on the completely new foundation. 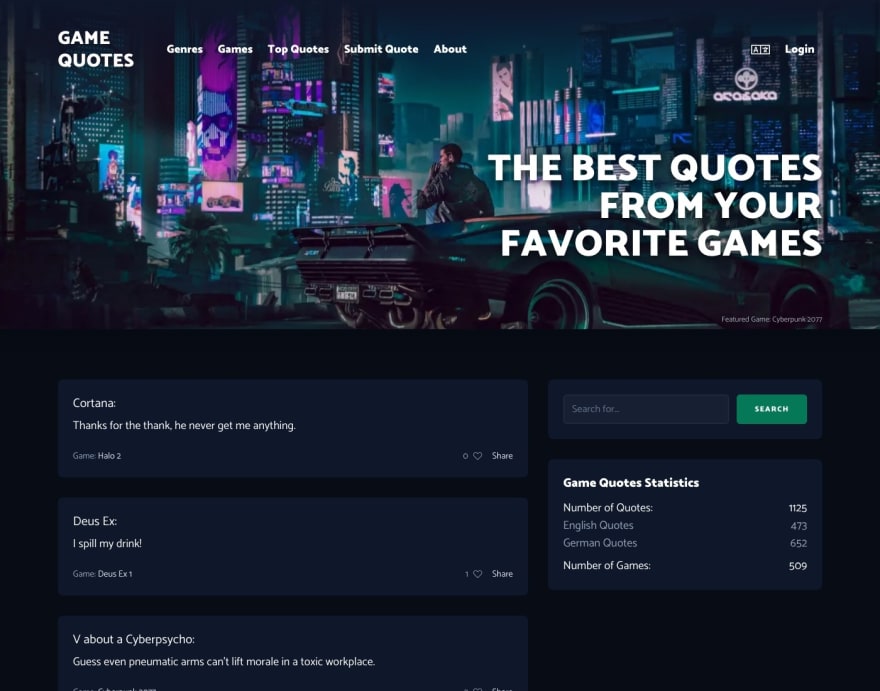 Just three weeks after the initial decision I published the new version of Game Quotes. I had done additional stuff to clean up the content, implement proper Schema.org markup and optimize the design. I got a lot of positive feedback and the first submissions for quotes from random strangers on the internet. It was the right decision to rewrite Game Quotes from scratch. I had quickly moved from a pile of tech debt to a modern application that is also more performant.
A week later I released a new feature that was planned for years already: marking quotes as spoilers or NSFW content. The feature is already available and can be used.

In the next weeks I will add more features and finally enable public profiles, so anyone can register. Stay tuned.

This article was first published on my blog

Kevin Woblick
Creator of Stumbled.to, LinkAce, Game-Quotes.com and InvoicePlane. Sponsor me on Github: github.com/sponsors/kovah
How to get all user sessions in Laravel from Redis
#laravel #redis #webdev #php
The Relaunch of my Portfolio for 2021
#portfolio #webdev #tailwindcss #css
7 things to consider before starting to refactor Code
#refactoring #codenewbie #codequality

Once suspended, kovah will not be able to comment or publish posts until their suspension is removed.

Once unsuspended, kovah will be able to comment and publish posts again.

Once unpublished, all posts by kovah will become hidden and only accessible to themselves.

If kovah is not suspended, they can still re-publish their posts from their dashboard.

Once unpublished, this post will become invisible to the public and only accessible to Kevin Woblick.

Thanks for keeping DEV Community safe. Here is what you can do to flag kovah:

Unflagging kovah will restore default visibility to their posts.