Framer-motion is a library that powers animations in Framer, and it's now available as an independent package that we can use in React applications. It has a very simple declarative API that makes it easy to create and orchestrate complex animations with a minimal amount of code. In this article, we'll start with very basic animations and gradually move to the more advanced ones.

Note: animation examples in the article may not look smooth because of a low frame rate of GIF images. Rest assured, real animation are butter-smooth. You can play with them in the sandbox here.

To create the simplest animation, we can specify animate property that accepts an object with CSS properties that we want to animate. This is how we can animate opacity and background color of the div:

The properties that we pass to animate represent the final state of the animation. Framer-motion will infer the initial state based on the specified CSS properties, or their defaults. For example, default opacity for CSS elements is 1 (even if we don't set it explicitly), so framer-motion knows how to animate it down to 0.5.

It's worth mentioning that property y is special - it's not a real CSS property, but framer-motion understands it. There are a bunch of CSS transform-related properties that have shortcuts in framer-motion, so when we change y property, we actually apply animation to transform: translateY() property. Similarly, there are scale, rotate, scaleX, scaleY and some other properties, you can find the complete list here.

The animations that we've done so far only run when components mount. Now let's see how we can animate elements when some internal state changes.

We can set animation property to different values based on the internal state, and framer-motion will animate between those values when the state changes:

Note that the component re-renders only when state changes, and not on every animation frame, which makes animations very efficient.

The real power of framer-motion comes from using variants. Let's start by exploring how we can rewrite the previous example to use variants.

We'll begin by extracting inline definition of animatable properties from animate prop into a separate object. This object will contain key-value pairs, where keys are some meaningful names that we give to our animatable properties, and values are the properties themselves. Then we can pass this variants object to variants prop, and inside animation we can toggle animations based on the string names we gave to them:

This example works, but it's not very useful. The power of variants is in orchestrating complex animations throughout a component tree, and to see that, we'll need a slightly bigger example.

In the component below, we have a container div that has three child divs inside of it. Container div uses the same onClick animation that we've seen before:

Now we can animate children elements simultaneously with the parent by setting their own variants object. When descriptive names of child animations match those of the parent, child animations will be triggered at the same time as parent animation.

Notice how both container and box variants have the same keys active and disabled:

Variants also allow us to orchestrate the child animations. We can do that by providing transition property inside the animation object.

For example, we can set staggerChildren children property, which specifies the delay in seconds between child animations:

With this configuration, the parent div changes background color first, and then child elements rotate with a staggered delay.

There are a lot more properties of variants that we can control - animation delays, stagger direction, etc. You can find more information on them in framer-motion documentation.

In this article, we've seen how easy it is to animate React components using declarative API that framer-motion provides. However, we just scratched the surface, since there's a lot more that framer-motion is capable of - gestures, dragging, working with SVG paths and much more. If you're interested in learning more - check out my new course that covers all the great features that framer-motion has to offer: 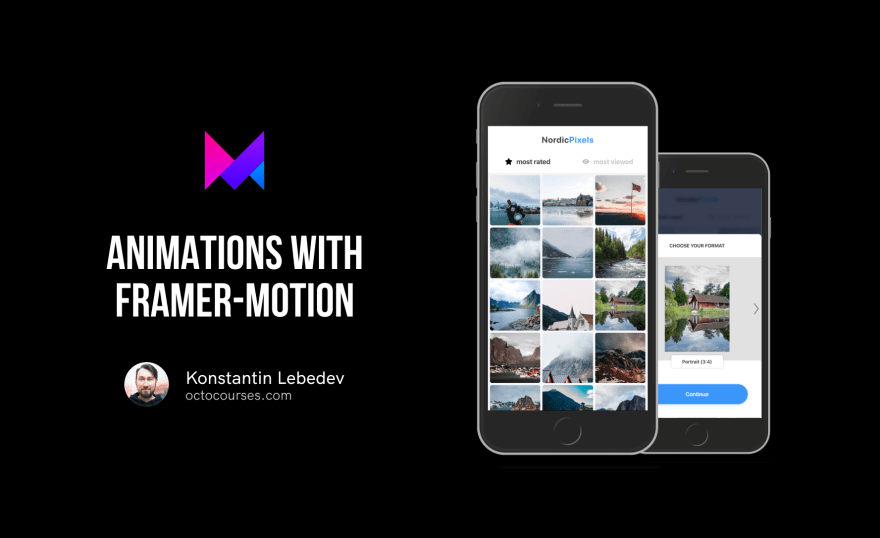 Morphdom and MVU, don't overlook this !

Once suspended, kosslebedev will not be able to comment or publish posts until their suspension is removed.

Once unsuspended, kosslebedev will be able to comment and publish posts again.

Once unpublished, all posts by kosslebedev will become hidden and only accessible to themselves.

If kosslebedev is not suspended, they can still re-publish their posts from their dashboard.

Once unpublished, this post will become invisible to the public and only accessible to Konstantin Lebedev.

Thanks for keeping DEV Community 👩‍💻👨‍💻 safe. Here is what you can do to flag kosslebedev:

Unflagging kosslebedev will restore default visibility to their posts.