The next browser war is upon us, and this time it isn’t fought on the battlefield of proprietary API implementations and badly implemented CSS and JavaScript standards, but rather it’s different ecosystems battling it out with their respective variants of Blink, which itself is a part of open source Chromium.

Sounds boring, right? And to some extent it really is. No Firefox fanboys, no Opera elitists and Internet explorer normies keeping to their respective corners of the public space, each group looking down on the others. No crazy public services, where a government customer demanded the website to be visited only with IE5, and all other browsers to be blocled. And no ActiveX or Flash (thank heavens).

A lot has changed, mostly for good. But you know what never changes?

War. War never changes. And even a browser war is still a war. We’re still seeing different parties stabbing each other in the back, stealing innovations, blocking others off their web properties (especially Google is getting notorious because of this) and some of the most visible frontmen engaging in Twitter spouts. And this has led to the market being almost monopolized and split into competing niches at the same time.

But before diving deeper, let’s see how we got here, shall we?

The fortress of solitude has fallen

The browser market saw an interesting development since late 2000s to 2013-2014, when the market that had long been really stagnant (most of the people using Internet Explorer, on one hand because it’s there already and on the other because all enterprise apps require it anyway) was quickly split into 3 big portions of almost equal size for Internet Explorer, Firefox and Chrome. 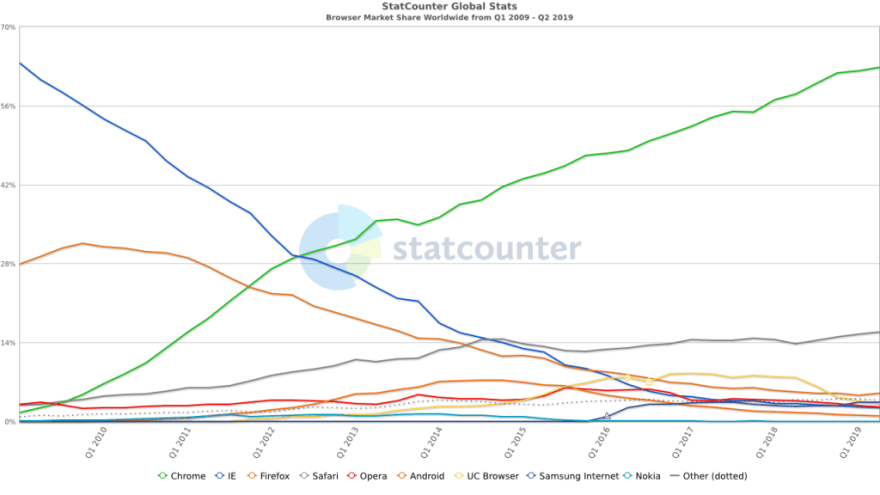 Google Chrome now accounts for close to 70% of web traffic (and Chromium variants of course way more) – close to the same percentage Microsoft held with Internet Explorer, when the market was at the most stagnant point.

But that wasn’t made to last. While IE kept creeping further and further to irrelevancy, Chrome slowly captured a very commanding position on the market.

After Microsoft defecting to use Chromium to power their only browser, Edge, there’s basically only Blink (the browser engine behind Chromium), Gecko (Firefox) and Webkit (Safari) left. Of all browser sessions, over 80% are using Chrome – and even bigger part are using Blink. Gecko + Webkit together count only for about 13% of all usage.

Okay – perhaps Trident earns a (dis)honorary mention for its longevity – while it’s still powering Internet Explorer, nobody should use it as a browser – its a compatibility tool for legacy applications, not a web browser.

This development seems to be bringing a new, boring era, upon us. An era, where there’s mostly just one browser, branded in 10 different ways. An analogous situation has slowly developed in smartphones, where in a lot of markets there’s primarily Android phones available – there’s an Android by Samsung, an Android by Sony, an Android by LG, another by Huawei (for now, at least), a crippled Android by Amazon and at least three of varying approaches by OPPO. And each of them are worse and more invasive than running “stock” Android, since if everyone is selling the same product with similar prices, you have to make the extra money by gobbling up user data or accepting bribes by crapware vendors.

It’s not all bad, though

However, all this boringness is not only bad. I mean, everyone knows what everyone says the Chinese use to curse their enemies?

“May you live in interesting times“

“Chinese curse” – as coined by JFK himself. It’s actually more like “bad translator’s curse”, but let’s not go there now.

Interesting times are not necessarily good. Indeed – what we learn in school about the World Wars – those are definitely interesting time periods, but not good times to live! Similarly, if there has to be another browser war (okay, that’s quite a comparison, but you know what I mean!), I’d rather hope it’s a boring one.

For a developer, world with (basically) just one web browser isn’t that bad. Well, as long as that browser is the one said developer prefers! But that’s less standards to support.

In all seriousness, while the overconsolidation of any market is ultimately bad for pretty much all the parties, at least we still have behemoths like Google and Microsoft duking it out, just both with their own Chromium variants! And if Microsoft has to be participating in yet another wave of browser wars, I’d hope to see them do that in a fairly constructive manner – which I think we’re seeing with Edgium now.

Why do I think that? Well, the recent communication and some of the edgier back-and-forth between Microsoft and Google makes me hope that Microsoft will still be aiming to be a big player in the browser market – just this time, they’ll be concentrating on the innovation in the browser instead of trying to keep up with the evolving standards when maintaining the engine. Since they now finally get an engine that respects web standards (more than Trident ever did, anyway), they can spend the expensive development resources on bringing features like timeline and web notes, and hopefully optimize the implementation better than Google has :)

And then there are the small players.

Chromium as the catalyst of innovation?

The well-maintained and stable Chromium project has been a catalyst for growth in the small but interesting market of “alternative browsers”. I’m including a full list of current Chromium-built alternative browsers in the end of the post.

When the engine is stable, more room is left for other development tasks, so even smaller organizations can implement their own browsers. And this means that there’s a bunch of interesting implementations out there!

Out of all the smaller ones, I’m a huge fan of Brave. I’ve written about them before, but their approach – one, where they try to solve the advertising issue in a more user-friendly way than Google – is enticing enough to warrant another short mention.

And Brave is definitely not the only one. While the approaches are different, there’s a number of interesting projects out there.

What does the future hold?

Whereas we will suffer from a stagnant market in regards to browsers, unless something meaningful happens eventually, for now it at least makes life easier for developers and makes it possible for tiny players to design alternative browser implementations, where their innovation happens outside the rendering – which is a good thing.

We’re already seeing the field of Chromium browsers being split in regards to things like limiting APIs AdBlocking extensions can use (Opera, Brave and Vivaldi, for example, are going to find workarounds even if Google removes the APIs from Chromium). Google’s hegemony in the Chromium space is hopefully being slowly chipped away by niche competitors, and hopefully Microsoft with Edgium as well. There’s even hinting of actual Chromium forks happening.

At the same time, let’s hope Apple gets their stuff straight with Safari, and Mozilla continues their interesting work with Firefox – which right now is being re-positioned as a privacy-focused browser. But I’m hopeful: even if most of the competition would happen inside the Chromium space, there’s still room for innovation, as long as Google is not too dominant.

And when Google gets too cocky with Chromium, we will see a pushback from the community – perhaps in the form of a group of some of the niche players stealing the leading role of Chromium development with a competing fork in the future?

1 year into DevRel, here is what I learned

How I Broke GitHub Copilot, And Got It To Talk.

How I can create a foreighn table using a foreighn data wrapper that references to a remote one with the same name?