You're asking: - Who can attend?
We'rу answering: - Everyone is welcome!

Even if you have a monad-o-phobia, please join us, we want Haskell Love Conference to be accessible to everyone, no matter FP experience level. What’s more? We don’t mind if you bring your cat as a plus-one!

Meanwhile, here is the interview of our next speaker - Anton Kholomiov. Anton is an avid haskeller and musician. He has built many libraries on Hackage. Most notable are csound-expression, data-fix, language-css, temporal-media, temporal-music, processing-for-Haskell, data-fix-cse. Anton is happy to make clean and concise EDSLs for all sorts of problems. In his spare time projects, he tends to gravitate toward arts media applications (music, graphics) and compilers. Right now he is involved with cryptocurrencies and Cardano project and builds applications on top of Plutus framework.

For people who work in Haskell, what Library do you desperately want someone to write?

Easy to use GUI library or framework for mobiles (obelisk seems to be the case for it).Nowadays clients expect to have mobile apps for every useful app. It would be nice to expand on that market.

If you had to pick one thing to include in the next Haskell Report, what would it be?

I'd like to have a section on success stories from the industry or academia/research teams all over the world, or if not successful to have war stories on cool projects. So that every Haskeller can list through that section and be able to find the teams where (s)he can apply to use Haskell.

What would, in your opinion, be a Haskell “killer application”?

GHC is the most powerful Haskell app we have. Tool to explore space leaks, debugger for Haskell. 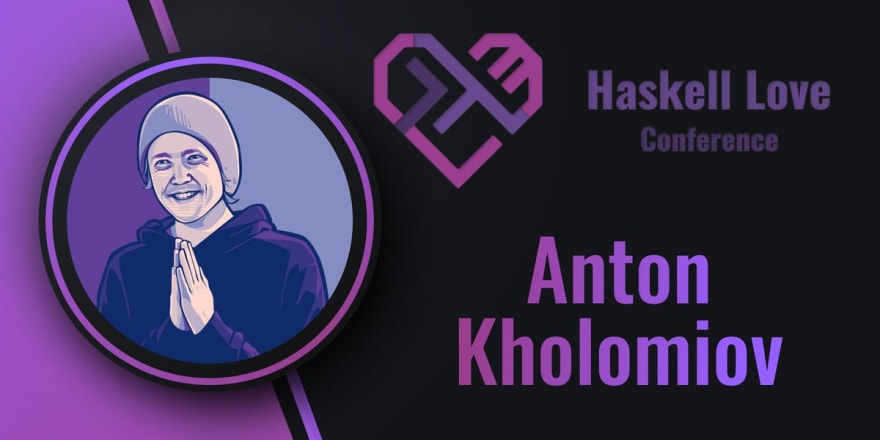 #OSS developer, #Haskell & #Plutus consultant @ mlabs.city. When Anton Kholomiov is not focusing on blockchain, he likes to tune up w/Haskell and Csound. Those who cannot wait to see Anton's talk @ #HaskellLove -hop on youtube and give a like! loom.ly/aa-zFV8

What would be your favourite piece of Haskell-branded clothing?

What I Wish I’d Known When Learning Haskell?

How addictive it is.

Once we were over the infamous Haskell learning curve, we began looking for functional programming, immutability, and types everywhere! Given that most modern applications are web apps, it is only a matter of time before we make the switch to typed-FP for front-end development. Would you write the front end in Haskell?

I did it with Reflex. It was hard but fun thing to do. I think if I need to do web app again I would use Haskell for that or try purescript which is close to it.

State of Haskell Survey results in 2020 shows that the number of developers who use Hackage vs. Stackage is almost the same. Which one do you use, why?

I use both. It's on demand of the project/team. For my pet project I usually use Stack with Stackage becasue it is quick to setup (or maybe I'm used o it). Recently I've started to use more nix as niv saves lots of trouble to setup the Nix-project from scratch.

96% of respondents of the State of Haskell Survey said they code as a hobby, do you? Is that for an open source project?

I use Haskell on my day job.

If you wanted to convince someone to use Haskell, what would you say?

It's hard question. It's the most beautiful and elegant language I'm aware of.

If you could change one thing about Haskell, what would it be?

If you want to attend Anton's session, you still have an opportunity to register for FREE! He will be presentig on 10th of September at 17.15 CEST at Joy Track+ Q&A in SpatialChat!

Introduction to forms in Angular (Part 1)

Introduction to forms in Angular (Part 2)

Konfy
"I think we're moving in a very positive direction"— Noon van der Silk "Generally I think that all commonly needed libraries already exist and are quite good"— Ivan Gromakovskii "JUST PICK A LIBRARY AND WRITE SOMETHING." — Joseph Morag

Once unpublished, this post will become invisible to the public and only accessible to Anastasia Khomyakova ❤.