There is nothing more exciting than learning to code for the first time. We get so passionate that we want to start building projects right away. However, we tend to miss the one thing that can bring more meaning in the way we write codes which is... the fundamentals.

Let's get started, shall we? Feel free to grab your cup of coffee:)

First of all, what is JavaScript?

JS is a single-threaded language that can be non-blocking. 'Hmm okay..what does that mean?' Well, being single-threaded means that it can only run one set of instructions at a time. Think of it as reading a food recipe, you have to follow instructions one by one from top to bottom right? It's not doing multiple things, and that's because it has only one Call Stack. 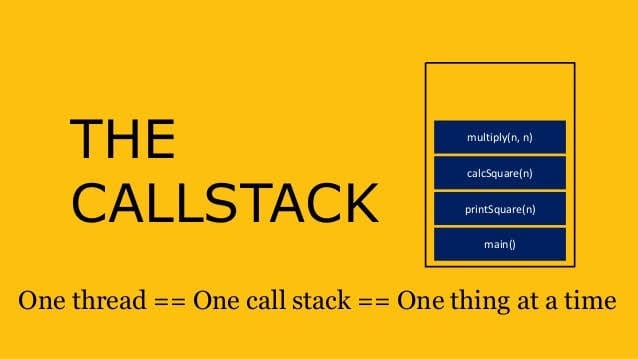 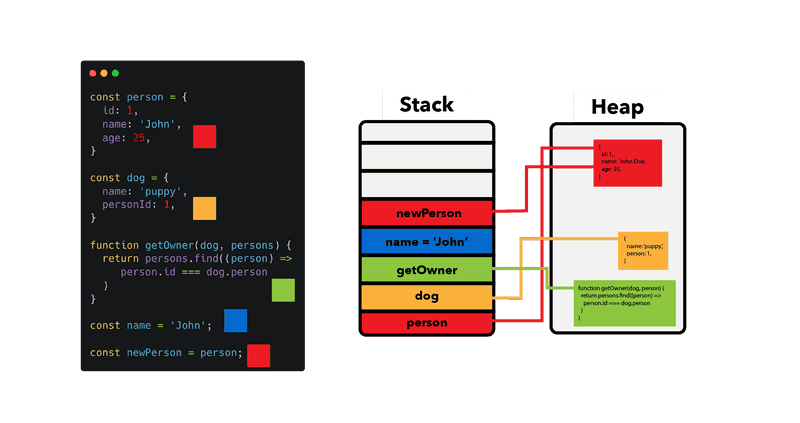 That's what happens when a computer program incorrectly manages memory allocations and this is when the memory is not released when it's no longer needed.

The good news, this issue was fixed when JS Engine introduced the Garbage Collector.

Garbage Collection is a form of automatic memory management. It will attempt to reclaim memory which was issued by the program but is no longer needed.

You might have ever heard of it? Well, since we know that there is one call stack that means we are also quite limited. A stack overflow happens when the call stack space is exceeded.

The most common cause is infinite recursion, where a function calls itself so many times that the space needed to store the variables and information connected with each call is way more than we can fit on the stack.

And here, we just created an infinite loop that will run indefinitely. If we try to run it inside the browser, the function will run until the stack space is exceeded as you can see in the picture shown below 👇.

Now that we know what JavaScript is, we need to know how it works.

As you might know, computers only understand binary codes which are 0s and 1s, meaning that they can't simply execute our JavaScript files since they can't understand what's written inside. That's where the JS Engine plays its most important role.

Instead of sending our JS file straight to the CPU, we first of all, need a translator to make the computer understand what we want it to do. As in the picture shown above, the engine takes our file, executes the compilation to binary instructions then sends it to the CPU to finally run it.

The first JavaScript Engine was created in 1995 by Brendan Eich. Before that, browsers were barely interactive since they were only run in HTML & CSS.

Inside the JavaScript Engine 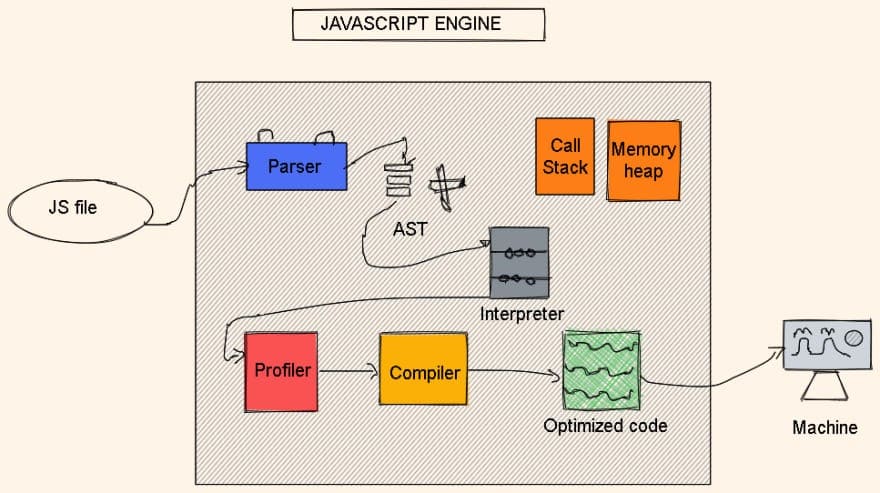 When we run a JS file, first it goes through the Parser which will perform a lexical analysis, which means it will break the code into tokens to identify their meaning or to know what the code is trying to do.

Secondly, the tokens will get formed into an Abstract Syntax Tree (AST). An AST is a tree representation of the source code of a computer program.

Now, before continuing I'd like to talk about two important things in a JS Engine that quite often confuse people, and that is..an interpreter vs a compiler.

In programming, there are generally two ways of translating to machine language, let's start with the first one.

JavaScript originally came as an interpreted language but now we can use a compiler to optimize the code. 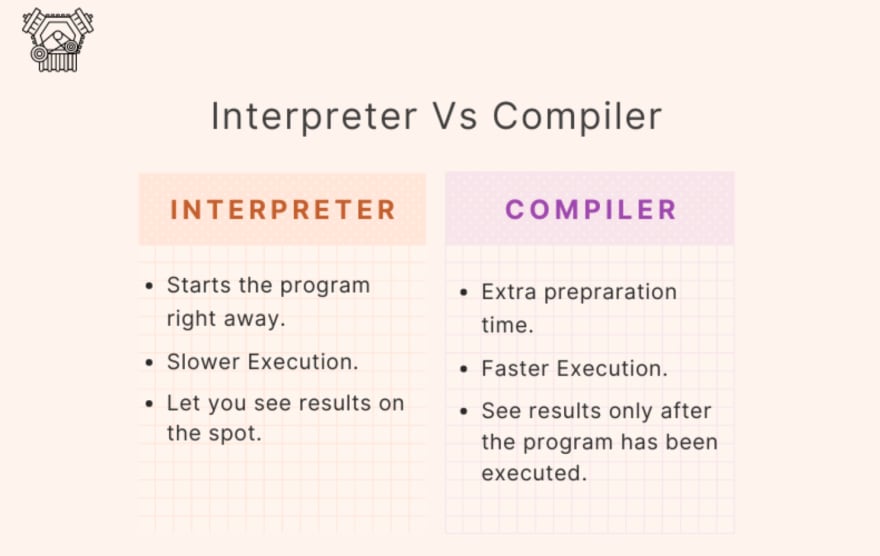 Now you might be wondering which one to use between a compiler and an interpreter but guess what, there is the best of both worlds! Google came up with the V8 Engine using both interpreter and compiler also known as JIT (Just In Time) compiler to make the engine runs faster.

Perfect! Now that we know what JavaScript is and how it works, there is still one small issue. If JavaScript has one call stack and runs one instruction at a time, wouldn't it take an eternity to run a large program? Well, yes but this is where the JavaScript Runtime comes in!

Runtime is an environment in which a programming language executes. This will make the browser keep working in the background while the synchronous javascript code is running, this uses the Web API to communicate. 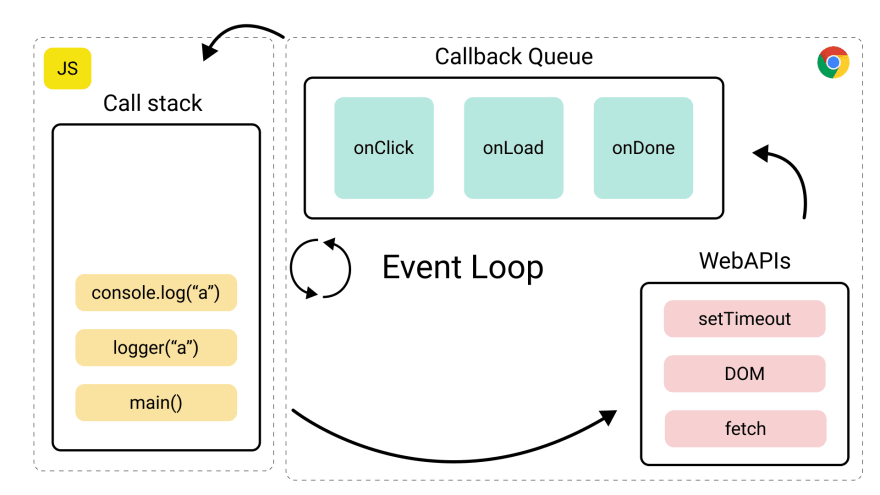 First of all, what's an API?

An API is an Application Programming Interface. In short, it's a kind of interface that has a set of functions that allow programmers to build software/applications or get access to some specific features or data of an application.

Now, a Web API which is not part of the JS engine but is instead provided by the browser, will simply extend the browser functionality by doing multiple tasks such as sending HTTP requests, listening to DOM events, delaying executions using a callback, etc...

These Web APIs are called Asynchronous. Why? Because they can run instructions in a different order compared to JS which can only run from top to bottom.

Using setTimeout, you can delay the first instruction to be able to run the second instruction first.

As you can see in the example shown above, console.log("Second") was written second but came as last in the output.

The Callback queue is a data structure that uses the FIFO (first-in-first-out) principle. That's where all the asynchronous callback functions need to go first before being sent to the call stack, it will simply try to maintain the order in which the message or method was added to the queue. 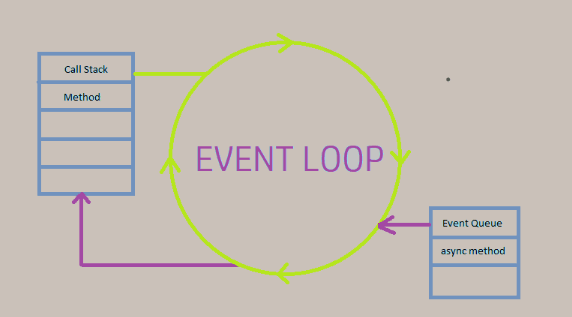 Hope you enjoyed this article ❤️

Alriight, that was quite a lot of new information, congrats to you if you made it so far! Feel free to bookmark this if you'd like to come back at it in the future.

Let me know if you enjoyed it by leaving a like or a comment :) or if there is a topic that you'd like me to write about.

Thanks for your time,

Why I listened to radio stations for working

Once suspended, klc will not be able to comment or publish posts until their suspension is removed.

Once unsuspended, klc will be able to comment and publish posts again.

Once unpublished, all posts by klc will become hidden and only accessible to themselves.

If klc is not suspended, they can still re-publish their posts from their dashboard.

Once unpublished, this post will become invisible to the public and only accessible to Kelsy Mnk.

Thanks for keeping DEV Community 👩‍💻👨‍💻 safe. Here is what you can do to flag klc:

Unflagging klc will restore default visibility to their posts.