This website has login, signup and logout functionality for users. The website allows users to create study lists for a topic (ex. Ruby, Javascript, etc.) that they forsee they'll be studying. The user can then create completed study sessions they've done that go onto a specific study list for a topic. They can also edit and delete these study sessions.

I also added into my project ActiveRecord validations and display of validation failures in the views to users.

The flow I took to set up ActiveRecord validations as well as Rack Flash to display failure messages to users was:

The above steps will get you ready to validate user input.

From here, to further demonstrate how an ActiveRecord validation works, I'll walk you through a challenge I was having in this project in finding and implementing a certain validation.

One of the challenges I was having was to get an ActiveRecord validation that'd make it so a user could not create multiple study lists with the same exact topic. I didn't want a user to be able to have multiple study lists titled "Ruby" for instance, but instead I wanted all of a user's study lists to have unique names (ex: Ruby, Javascript, React).

Once the steps prior had been set up, this is the code I wrote in my StudyListsController and my StudyList model to get this validation working:

Line 5 in the StudyList Model is the model validation that I used for this. The ActiveRecord validates_uniqueness_of validation, along with the scope parameter that follows, validate whether the value of the specified attributes are unique based on a scope parameter.

According to my model associations, a study list belongs to a user, thus, each study list created has a user_id foreign key associated with it. Since study lists have access to their user_id, I used the user_id as the scope parameter.

This code is basically making it so that a topic can only be used once for a particular user_id when a new study list is being created.

The above picture of code for the post "/studylists" route, my controller action that creates new study lists for users, works to properly implement the validation like so:

-I first make a new study list with the user input for topic that I have gotten from the params hash, along with setting user_id equal to the current user's id (the current_user variable comes from a helper method that finds the current user). I use .new so that the study list is not saved to the database yet, because I want this data to have been validated before it would possibly hit the database.

-The code after the else is what will happen if @studylist is not saved. A flash message is a way to let your users know what happened after an action they took on your website. I set flash[:message] to the message I want the user to see. This way they will know exactly how to correctly create a new study list.

-In this else statement I also redirect them to the form for creating a new study list. This way, if their new study list submission fails, the page they are on with the fill-in form immediately reloads and then on the page they see the error message that I set flash[:message] to.

-The final part I implemented for this validation was to make sure that users would see the error message I set flash[:message] to, in case of the validation on the model failing. The extra bit of code I put in my view file that has the form for a new study list was the following from line 16-18: 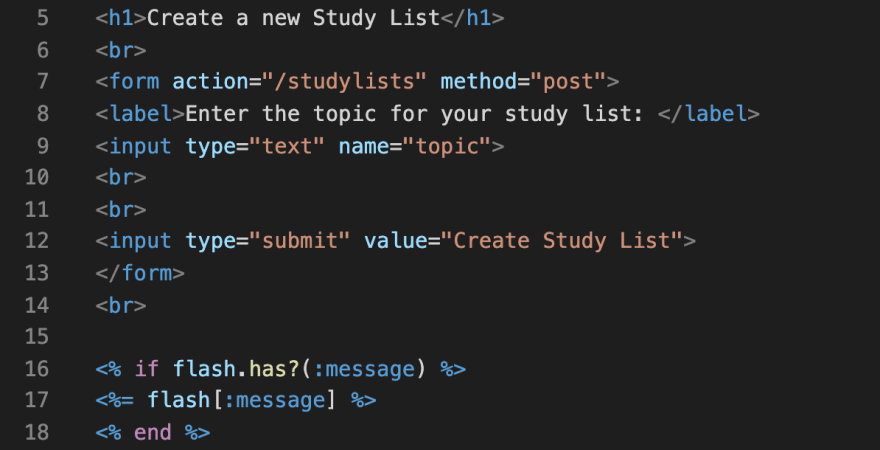 This code displays the flash[:message] you defined to the user when applicable. The flash message will then stay there until the user goes to another page.

I hope these insights on my recent experience using ActiveRecord validations and Rack Flash might be able to help someone in some way!