Recently I wrote an article about implementing E2E testing in CI environment with Testcontainers usage. And today I want to append a small detail. We'll talk about contracts and why is it important to write integration tests for them. The code examples are in Java but you can apply the proposed solution to any programming language. 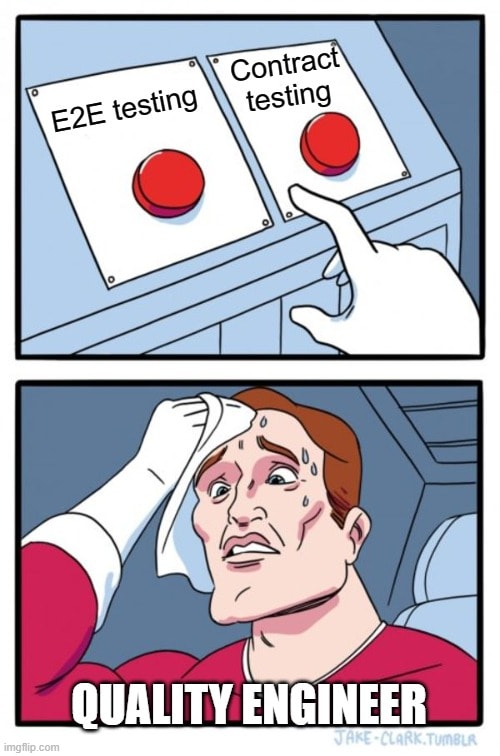 If you haven't read my piece about E2E tests, I strongly recommend you do it before going further. In this article, there will be lots of proposals and discussions based on the experience of the previous item.

You see, E2E testing is incredible. It's the highest quality assurance bar one can put within the software project. At the same time, there are several nuances you should take into account:

As you can see, E2E tests work until the software project becomes huge and too complicated. So, what shall we do then?

Firstly, have a look again at the system diagram below from the previous article.

The whole business scenario can be described in the following steps:

What contracts do we have here? Take a look at the schema below.

I highlighted the contracts with pale green ovals:

Why do we need contracts at all? Though additional layers add extra complexity, contracts also help us to get rid of integration tests in API-Service and Gain-Service. Take a look at the example below.

As we already discussed, UserMsgPush is the contract. There are two implementations: RabbitUserMsgPush and InMemoryUserMsgPush. And now Liskov substitution principle comes into play. If you simplify the definition, replacing one interface implementation with another should not break the software's correctness. In this case, we don't have to involve RabbitMQ in testing API-Service! Because InMemoryUserMsgPush will be sufficient. So, here are the benefits:

Seems that contract testing is the silver bullet. Firstly, we reduced the number of integration tests and simplified the quality scenarios in the services. Secondly, we got rid of E2E tests completely which are tough to write, execute, and maintain. Unfortunately, contract testing also has drawbacks.

Microservices don't usually have much code. They often provide just a single operation. For example, API-Service accepts a message via REST API and pushes it to RabbitMQ. That's it. Therefore, extra layers, interfaces, and abstractions may seem like noise. Why do I have to operate using a facade, if I can just proceed it directly?

Although abstractions are useful, their abundance can make code more complicated than it should be.

The primary advantage of integration testing is that it allows us to perform local experiments before submitting a pull request. For example, suppose you need to adjust some properties of the external facility your service depends on. Those can be:

If you have integration tests within the service you're working on, you can just tune the required settings and run tests locally to verify the behaviour. But if the service relies on contracts, the task becomes intriguing. You have several approaches:

As I wrote in the previous article, the main advantage of E2E tests is that they check the backward compatibility problems. Regrettably, contracts do not provide such a feature.

For example, look at the RabbitUserMsgPush contract implementation below.

In this case, the passed payload is serialized to JSON. Suppose that we decided to apply binary protocol instead (e.g. Protobuf). Take a look at the modified RabbitUserMsgPush below.

That is convenient. Because we can change the contract's implementations without modifying business logic at all. Nothing can go wrong, isn't it? Well, each contract defines a producer and a consumer. What if we update the producer's contract before the consumer's one? It means the consumer won't be able to deserialize the message and fail.

As you can see, we cannot break backward compatibility easily in the distributed environment. We may not be aware of previous contract versions that other clients are still using. E2E testing track those violations. But due to the contract's implementations isolation, the latter approach cannot provide such benefit.

Have a look at the proper way of applying such changes below.

I created NoOpUserMsgPush for convenience. It's the last chain element that does not operate. So, we don't have to check whether the next element is present in each implementation.

Keeping changes backwards compatible in contracts is possible but it requires additional effort. You can also put counter metrics describing the number of particular operation invocations (i.e. pushing JSON and Protobuf messages) and display them into Grafana. That'll help you to notice when all consumers are updated and producers can safely eliminate the redundant functionality.

A single language for microservices

A contract is nothing but a regular piece of code. So, you cannot apply the contract written in Java in the microservices created with Golang. If you need to use varying technologies and languages for the different parts of your system, then implementing statically typed contracts might become a challenge. There are some solutions on the market. For example, OpenAPI and AsyncAPI specifications can generate code snippets based on the provided configurations. Anyway, the approaches have limitations.

Contracts are powerful. In some cases, they can make your code easier to test. On the other hand, they also bring maintainability cases that should be considered. It's up to you to decide whether to use contracts or not. But in my opinion, they cannot replace E2E testing completely.

That's all I wanted to tell you about contract integration testing. If you have any questions or suggestions, please, leave your comments down below. Thanks for reading!

Security, Cloud with JWT and WebFlux

The Kubernetes Dashboard for Helm

Once suspended, kirekov will not be able to comment or publish posts until their suspension is removed.

Once unsuspended, kirekov will be able to comment and publish posts again.

Once unpublished, all posts by kirekov will become hidden and only accessible to themselves.

If kirekov is not suspended, they can still re-publish their posts from their dashboard.

Once unpublished, this post will become invisible to the public and only accessible to Semyon Kirekov.

Thanks for keeping DEV Community 👩‍💻👨‍💻 safe. Here is what you can do to flag kirekov:

Unflagging kirekov will restore default visibility to their posts.