A while ago I posted a question to the community about problems I've encountered when implementing a micro frontend architecture and whether this is common or if there is a better way.

Thank you to those who responded. https://dev.to/kerryconvery/microfrontends-ke4

Not so long ago I was a involved in a project as a tech lead leading one of many teams to build micro frontends using module federation. My role was to work with the lead architect and other teams in guide my own team through the implementation, finding solutions to problems along the way. It was arguably one of the best roles I've held so far. I'd like to share how we went about it and share our solutions to certain problems we faced.

We were building several applications that spanned not only across a large organization but also across it's partners and subsidiaries as well. It was to be a giant web of interconnected micro frontends so the solution had to scale very well in terms of being able to roll out new features and fixes quickly across all affected apps. Module federation was seen as a way to enable this.

Module federation is a feature of Webpack 5 which allows an application to consume code from another application at runtime using either static or dynamic imports.

You can read more about module federation here https://webpack.js.org/concepts/module-federation/

The following image is an attempt to give a visual representation of how such an app could be stitched together. Each colored dotted box represents a MFE component embedded in the shell application.

Now imagine that these MFE components can be reused in many applications, for example the catalog MFE component could also be used in a back office application to list out the products currently being sold and could render edit and remove buttons for each product based on roles; more on that later. If you later decide to change the look and feel of the catalog component or fix a vulnerability, then both the public facing application and the back office application could be updated as soon as the new code is deployed and without needing to redeploy the shell applications. This is why module federation chosen, the ability to roll out changes to multiple applications at scale without having to rebuild and redeploy all of those applications. This all sounds good on paper but it requires discipline within the development teams to keep the architecture clean, as we know that even a seemingly minor changes can have unforeseen consequences. Only time will tell how well this strategy will actually work in practice.

There are many aspects to consider when building micro frontends. What follows are the areas that we probably spent the most time on trying to get right.

Communication
Communication between the shell and the MFE components is done via props and browser events. Props allow a consumer to configure the MFE component or pass in callback functions. Browser events are published by MFE components and used for global/cross cutting notifications which would be difficult to implement cleanly using callbacks. In the above example the catalog component would publish an ADD_ITEM event that the shopping cart listens for so that it knows the user wants to add an item to the cart.

Contracts
We defined very specific contracts for each MFE component and events. Typescript was chosen as the way to enforce those contracts at development time. To share these contracts they were published in an npm package.

Versioning
We followed semantic versioning but we had a rule that there can be only 1 major live version at a time; maybe 2 in rare cases. The reason for this rule was because only a major version is meant to contain breaking changes to a contract thereby forcing a consumer to pull the latest contracts, test and redeploy their app. In the case of minor and patch updates, as soon as a component is deployed into production the consuming app will immediately get the latest changes without needing to be redeployed.

Multiple domains and multiple environments
It is common for an application to be running in different environments, Dev, Staging, Prod but in a module federated world this presents a bit of a challenge. How do you tell a consumer of an MFE component where it should consume it from? These are the methods I've seen used in the past:

While these methods work, and I have used the promise based method for an earlier MFE, they do have their challenges. Particularly when different domains are involved as with our case, because you run into trouble with CORS and whitelisting the domains of all consumers of each MFE component isn't practical. We solved this by utilizing the path based routing capability of Akamai to route requests from the shell application to static assets or experience APIs. This means that the consumers don't need to know the location of the components they are consuming and since all requests looked like they came from the same domain, CORS also becomes a non-issue.

This diagram illustrates how this works. 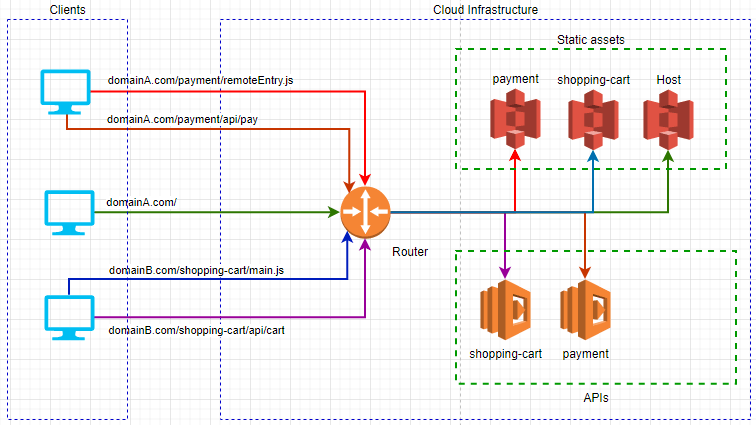 Analytics and Logging
The MFE components and the shell had a need to report analytics and logging but we wanted this to work at the shell level. Therefore browser events were raised by each MFE component and capture by the shell. The shell was then responsible for sending those messages to the analytic and logging platforms.

Npm package dependencies
Module federation allows federated components to bring their own npm dependencies and you can use the Medusa dashboard to see what dependencies are in use. Some packages such as React can only exist once in an application and Module Federation allows you to specify a package as being a singleton so that it will only download it once. Though React versions 16 through to 18 are mostly backwards compatible as long as everyone is using only the features that are supported by the shell React version. If the shell wants to upgrade the version of a singleton dependency that is not backwards compatible then all MFE components would need to upgrade first.

If anyone has a better way to handle routing within a federated app then I would be interested to learn about it.

This post has become quite long and I've talked about the main areas I wanted to cover so I think I'll leave it there folks. If you've made it this far then thank you for reading and I hope others embarking on micro frontends using module federation can take some food for thought from it.

Once suspended, kerryconvery will not be able to comment or publish posts until their suspension is removed.

Once unsuspended, kerryconvery will be able to comment and publish posts again.

Once unpublished, all posts by kerryconvery will become hidden and only accessible to themselves.

If kerryconvery is not suspended, they can still re-publish their posts from their dashboard.

Once unpublished, this post will become invisible to the public and only accessible to kerryconvery.

Thanks for keeping DEV Community 👩‍💻👨‍💻 safe. Here is what you can do to flag kerryconvery:

Unflagging kerryconvery will restore default visibility to their posts.