Monolith Server Architecture is a thing of the past, but to understand that we have to understand what it is. Traditionally we hosted resources in one environment which made it versatile, but also heavy and very difficult to update changes. Everything was happening in one pipeline, so if one part crashed it all did.

Like always, the technology is changed and microservices are just one example. Microservices are used to split up tasks into specific operations. In the picture below, you can see all the small microservices one interface may be running on multiple machines. The whole functionality of a backend is now in thousands of containers all over the world. 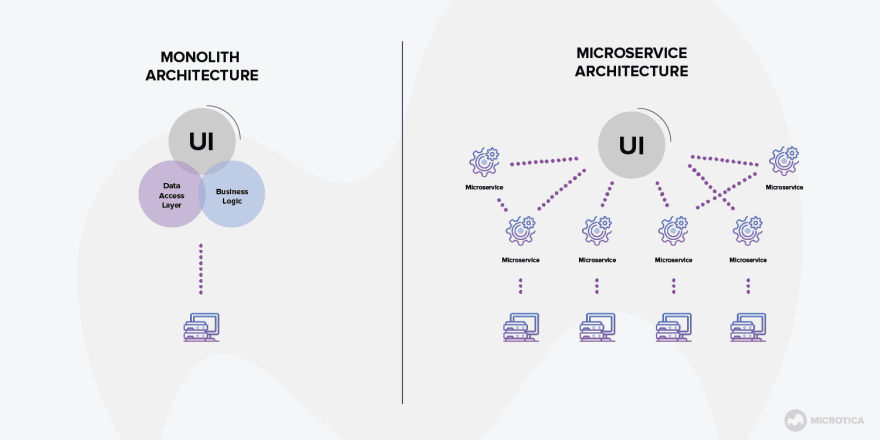 As hinted at this new system is a lot more reliable. You can update code easily and often with a lot fewer issues because you are only changing one container, not all of them. They are flexible in adding and deleting functionality. They may not be perfect for every project, but I would definitely consider them for your next one.

A Complete Guide to Waves

Once suspended, kerndesigns will not be able to comment or publish posts until their suspension is removed.

Once unsuspended, kerndesigns will be able to comment and publish posts again.

Once unpublished, all posts by kerndesigns will become hidden and only accessible to themselves.

If kerndesigns is not suspended, they can still re-publish their posts from their dashboard.

Once unpublished, this post will become invisible to the public and only accessible to Kern Designs.

Thanks for keeping DEV Community 👩‍💻👨‍💻 safe. Here is what you can do to flag kerndesigns:

Unflagging kerndesigns will restore default visibility to their posts.