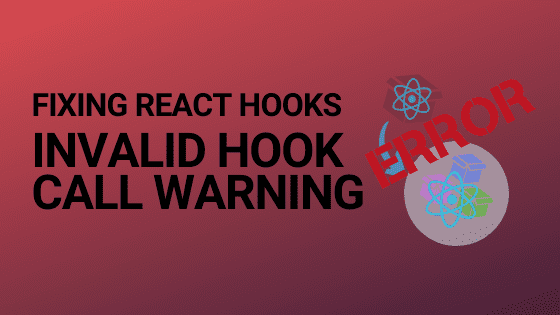 Recently, we decided to build our own React-based query builder as none of the existing ones out in the wild were doing what we wanted. Awesome: who doesn't love the chance to get their chops around a meaty sort-of-side-project, especially when we'd planned to release it to the open source community?!

The project went surprisingly well, smoothly even and the React query builder came together quickly and worked great. We had it all, lots of documentation, we were using Hooks (a new adventure for me) and it was well tested.

However, during testing I was slapped in the face by the rather rude Hooks warning you might be familiar with:

Hooks can only be called inside the body of a function component.

The problem is, that's exactly where all the uses of hooks were being called from....hmmm

So what causes the invalid hook call warning?

The warning can be fairly misleading if, like me, you've followed all the hooks rules and the tool you're building is working in a local example/demo project — which this was.

Despite the error message being a little misleading, the warning comes with a link to the really helpful official documentation from the React team, which, in summary, informs us that there are actually three possible causes of this issue:

There are three common reasons you might be seeing it:

I definitely wasn't falling foul of causes two or three, and I thought I had number one covered, but this required a little more digging.

Hugely frustrating times ensued. Monitors were thrown out of the window and I started to question my entire development life.

After much searching and debugging, the problem seemed to definitely lay with this duplicate versions of React or React DOM issue.

In fact, the answer lay at the end of the helpful React hooks documentation above. There was a link to an extended GitHub discussion on the pesky invalid hook call warning error and plenty of fellow devs with the exact same woes. More importantly, it had lots of different possible solutions to different situations.

For my particular scenario, I'd used my very own Parcel JS starter project (complete with React) to build the query builder. I did take note of the 'multiple versions of React' no no from the above list and had used Parcel's alias feature, as well as making sure to employ the peerDependencies config setting in package.json.

Despite all this caution, Parcel was still bundling React and React DOM into the production build!

So then, we've found the answer, but how do we solve this issue and make sure there's only one single version of React overall??

How to fix the invalid hook call warning

In a normal setup, you'll have a dependency pushed to some hosting repository, such as NPM, and you'll consume that in some other project that you're working on using the npm install my-cool-widget command.

This diagram illustrates the typical setup. 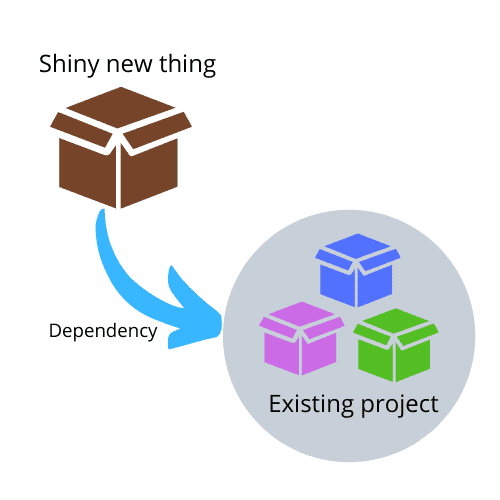 The problem here, is that, despite all the precautions above, our 'Shiny new thing' widget was bundling React into its final package **as well as our existing/consuming project containing React.

Thus, unknowingly, I'd violated the first law of hooks: thou shalt not have multiple versions of React in the same project.

The solution? Stop using Parcel and switch to Webpack (don't worry, I've got a great Webpack starter project too, with all the initial nuts and bolts you'll need preconfigured).

(At the time of writing, I'm not convinced that there is a way to use Parcel JS with React in such a way as to create a consumable dependency to push to NPM — prove me wrong comments section!).

It's probably less likely that you'll have a Parcel JS specific problem here, but either way, you'll probably find that your mysterious React invalid hooks error is caused by duplicate React versions. And, since Webpack is arguably the most popular JS bundler out there, there is a good chance you'll be using that to bundle and package your lovely dependency.

In order to dodge the invalid hooks error caused by duplicate React version, using Webpack, we'll need to do a few things in the dependency project (i.e. the widget you're building):

Set React as a peer dependency

First things first, open your package.json file and set your versions of React as a peer dependency:

This won't solve your issue, but it's necessary to ensure that the consuming project has React (or whatever else you have in here) installed as a dependency.

Configure Webpack to reference a different version of React

Now for the real meat and potatoes of the solution: we need to configure Webpack to essentially ignore React as part of the production bundle and instead, reference it from the project where this code will ultimately by consumed.

To do that, you'll need to add Webpack's externals property to the production settings, like so:

Finally, we'll also adjust the type of module system that Webpack outputs in the production build. To do that, we'll add the libraryTarget property to the output setting in the Webpack config as follows:

So that should see you right. It's worth noting that your consuming project will throw all sorts of other, new errors if it doesn't have React available, but once you have that installed, the dependency will look for React and try to import it (using the commonjs require() syntax) and all will be well.

Here's a quick summary of the helpful links used throughout this article: