I committed myself to learn Rust since April, mainly because I am so psyched about the Solana ecosystem which uses Rust for solana programs and is also built on Rust. The Rust Book is a great resource to learn from and after going through the basics, one challenge they ask you to try out is coding a program that generates numbers in a Fibonacci sequence. I thought it would be cool to document my journey by sharing walkthroughs of what I am building.

Fibonacci numbers are numbers that form a sequence, called the Fibonacci sequence, such that each number is the sum of the two preceding ones, starting from 0 and 1.

Written as an expression,

You need to have Rust installed on your computer, for Linux or macOS run the following command in your terminal,

If the install is successful, the following line will appear:

For those on windows, see the Rust docs.
Now run this command to create a new Rust project.

Open the directory in your IDE
You’ll find that Rust generates a main.rs file for you, this is our entry point to Rust, open the file. It looks like this:

Now let’s go ahead and edit the code..

Here is what’s happening. First, we create a function (fn) named fib and pass variable n as a parameter. In Rust, we have to specify the type of the parameter and its return value. I specify it’s a u32, meaning it can only accept unsigned/positive integers of 32 bits and the -> is specifying the return type of the function which is also a u32 integer.
Next, I use an if expression followed by a condition that checks if the value of n is less or equal to 0 and returns 0 if that’s the case. We then check to see if the value of n is 1 and return 1. In the else part, we implement the logic of the Fibonacci sequence by recursively calling the function with a different integer.

Printing the Values on the screen.

Now let’s go back to our main function and modify it to look like this...

Inside the main function is a for loop that loops over every integer from 0 to 15 and we use the println! to print each integer we pass and its corresponding Fibonacci value.
Type cargo run in your terminal and the output should look like this... 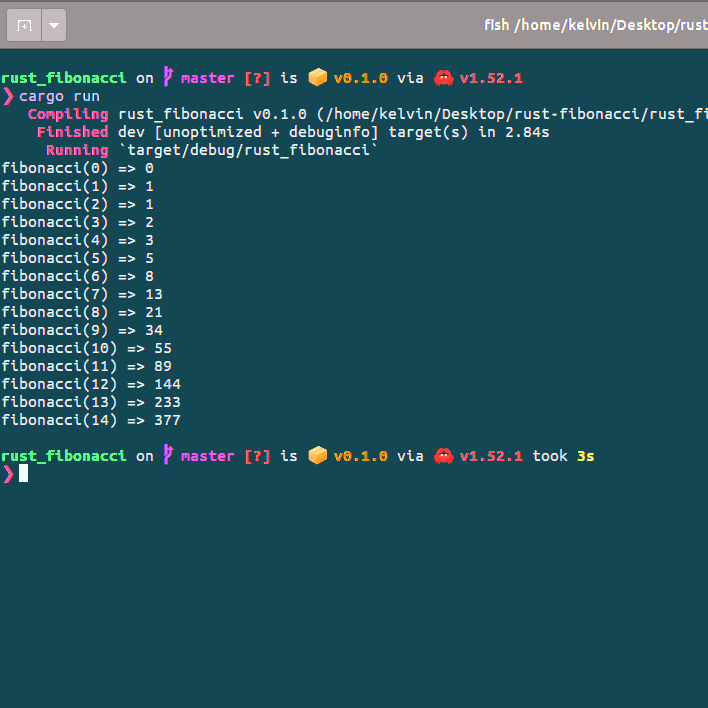 We want our program to allow the user to input a number and gets its corresponding Fibonacci. Edit the main function to look like so,

Let’s go over the above code line by line.
First, we import a library that allows us to handle user input.
use std::io;
Rust brings only a few types into the scope of every program in the prelude. If a type you want to use isn’t in the prelude, bring that type into scope explicitly with a use statement.
Inside the main function, we first let the user know how to quit the program by using the println! Macro to print a string to the screen.

Next, we create a loop using the loop keyword that will keep running until you break out by typing exit(we’ll see how that happens in a moment). We then let the user know how to interact with the game each loop by using println! again to print a string on the screen.

Each time through the loop, we create a mutable variable called int

Variables in Rust are immutable by default so we have to add the mut keyword when we are creating a mutable variable.
On the other side of the equal sign (=) is the value that int is bound to, which is the result of calling String::new, a function that returns a new instance of a String. So, what we are doing is creating a mutable variable that is currently bound to a new, empty instance of a String.
We then use the std::io library that we imported by calling the stdin function from the iomodule…

The next line, .read_line(&mut int), calls the read_line method on the standard input handle to get input from the user.read_line takes whatever the user types into standard input and append that into a string. We’re also passing one argument ( &mut int)to the method. The & indicates that the argument is a reference, references are also immutable by default so you need to write &mut int to make it mutable.

The next part is this method:

Is a Result type that represents either success (Ok) or failure (Err). AS I mentioned,read_line puts what the user types into the string we’re passing it, but it also returns a value — in this case, an io::Result. The Result types are enumerations/enums. An enumeration is a type that can have a fixed set of values, and those values are called the enum’s variants.

Our next piece of code is:

That checks to see if a user types exit to break out of the program. The .trim( ) method is passed to eliminate any whitespace at the beginning and the end.
In the next block of code,

We create a variable named int, Rust allows us to shadow the previous value of int with a new one. We often use this feature in situations in which we want to convert a value from one type to another type.
We bind int to the expression int.trim().parse(). The int in the expression refers to the original int that was a String with the input in it. The .trim() method on a String instance will eliminate any whitespace at the beginning and end. We use the .parse() method to turn the string into an integer. parse returns a Result type and Result is an enum that has the variants Ok or Err, remember? We use a match expression to decide what to do next based on which variant of Result that was returned. If the user typed in a number, we get Ok and store the number in int. If not, we call continue and instruct the user to pass in a positive integer again. The program basically ignores all errors that parse might encounter!
We finally print each integer the user passes and its corresponding Fibonacci value.

This was a great exploration of several Rust concepts like variables, loops, match, conditionals and data types. You could also go through the guessing game in the Rust book which I borrowed most concepts of this program from. Am looking forward to tackling more challenges and building better programs especially in the crypto space. Bye bye✌️!

This blog was first published in my blog