At ReactConf the team around React presented a new way to implement interactive components with React called hooks.

They published an RFC so React developers could discuss if this was a good idea.

In this article, we look into how such a functionality could be implemented.

Hooks are functions you can call inside your functional components to get the functionality, you would typically only get with component classes.

The basic idea behind hooks is to simplify React development in general, but I won't go into detail, you can read more about it from Dan Abramov, a React core developer, here.

This is an ALPHA feature of React and should not be used in production code.

In this post, we won't use React, but a few lines of code to illustrate how hooks could work.

Many people think hooks are magic and go against the philosophy of React and I can't blame them. If we look at the example, it doesn't tell much about what's happening.

It uses a simple function call to useState and somehow manages to get us the current state and allows us to change it and rerender the component with the new value.

The JavaScript pros will see the culprit here: globals!

If the useState function doesn't meddle with call stacks to get access to our calling component function, it has to store the data globally.

And if you read Dan's article you may find this tweet: 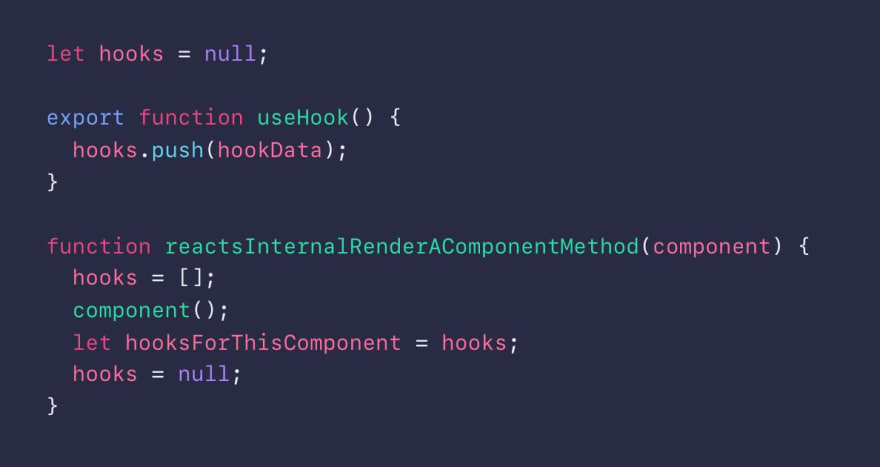 @erikras @sophiebits @dan_abramov Mistake #1: Assuming something is magic because you don't yet know how it works

This is the basic idea

Below, I’ve tried to write a simple example that illustrates how we could implement the "magic" of hooks. This has nothing to do with the official React implementation, but rather, it shows how the idea works.

First, we have some component definition:

It returns an object that is the definition of a <button> element with some text and a handler.

The function that renders everything into the DOM looks like this:

It takes an array of components and a DOM element as a render target.

It can only render flat lists of components, no nesting possible, to keep things simple. It also doesn't do any DOM diffing.

Let's go through it step-by-step:

You can find a working implementation with example components on GitHub

While the approach I took for implementation is far away from the actual React implementation, I think it demonstrates that hooks aren't crazy dev magic, but a smart way to use JavaScript constraints, that you could implement yourself.

In the last months I didn't blog as much as before. That's because I wrote a book about learning the basics of React: 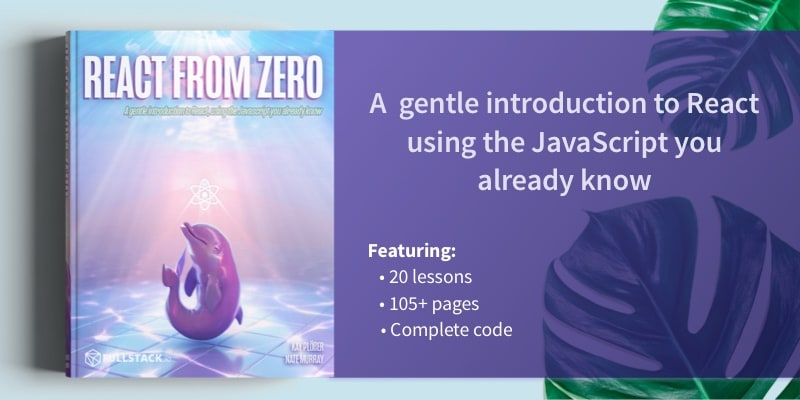 If you like understanding how React works by taking it apart, then you might like my book React From Zero. In the book, I dissect how React works by examining how components work, how elements are rendered, and how to create your own Virtual DOM.

You can download the first chapter for free here.

How to create a great user experience with React

Once suspended, kayis will not be able to comment or publish posts until their suspension is removed.

Once unsuspended, kayis will be able to comment and publish posts again.

Once unpublished, all posts by kayis will become hidden and only accessible to themselves.

If kayis is not suspended, they can still re-publish their posts from their dashboard.

Thanks for keeping DEV Community 👩‍💻👨‍💻 safe. Here is what you can do to flag kayis:

Unflagging kayis will restore default visibility to their posts.