As you might have noticed: The world is a shit!

There is this Corona thingy. Does it get worse? Does it get better? Who knows! We might all be dead already without even knowing it. And there is war worldwide, now even in Europe again!

The last years have been hard for us, and people wish for safety and stability. But where to get it from?

In recent years, everything has gone down the drain. The Rouble isn't exactly at its peak of value anymore. The USA printed more Dollars in 2021 than any year before.

That's why I'm happy to announce that we, the world's developers, can be the solution to this garbage fire!

The fungible token or cryptocurrency, called $CODE, is a stablecoin, just like Tether or DAI, but instead of deriving its value from the Dollar or some fancy algorithms, it's pegged to something. We all know what has the most value: Code!

The idea is that you give us your code, and we exchange it for $CODE. Easy right?

Write some software, send us the code; we will count its lines and give you 1 $CODE for 1 LoC.

To make things safe, we will run all code that we receive through Prettier, so right now, we only support the programming languages supported by Prettier. This way, nobody can smuggle in some extra line breaks to get a leg up! 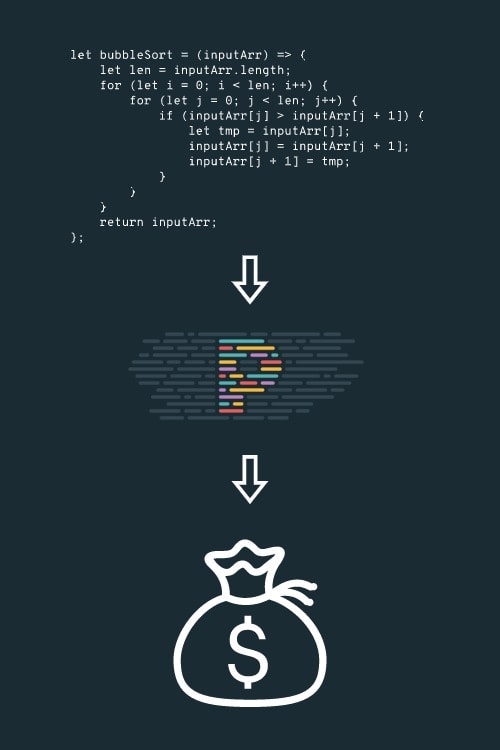 The first release of $CODE is obviously an MVP, that's why we can't support all programming languages right away, but I think we will get 80% of the market with JavaScript alone.

What We do with Your Code

We run a business that makes money with your code. Code has value, and if you look at Facebook and Google, you can make quite a good living with it. We can sell it or run it somewhere on decentralized infrastructure to generate revenue.

Our business development department is filled with intelligent people. All failed with one start-up or the other, so they know their stuff. They will figure out innovative ways to keep us afloat.

How do You Get Your Code Back?

That's the neat thing: You don't!

Fear not; we won't rug you.

The problem is, if we sell your code, we obviously can't give it back to you. But we can give you a new code!

We will hire developers worldwide to write new code for you from the revenue we generated from the code you gave us.

You give us 100 $CODE, and we will pay someone to write you 100 LoC, all formatted with Prettier, of course! We hold ourselves to the same standards as our clients.

This way, you get fresh code with all the potential in the world to be "the next big thing" and don't have to meddle around with your old code again. Who wants to work with old code, right? New, fresh codebases are what the developer craves!

If you want to learn more, you can read our whitepaper, where we go more into the details.

Allowlist for early adopters will be done over the weekend on Twitter.

So, start coding! The more lines, the better!

Are your salary expectations realistic in Web3?

Once suspended, kayis will not be able to comment or publish posts until their suspension is removed.

Once unsuspended, kayis will be able to comment and publish posts again.

Once unpublished, all posts by kayis will become hidden and only accessible to themselves.

If kayis is not suspended, they can still re-publish their posts from their dashboard.

Thanks for keeping DEV Community 👩‍💻👨‍💻 safe. Here is what you can do to flag kayis:

Unflagging kayis will restore default visibility to their posts.