Hello Katalians! Time flies when you’re busy creating awesome products! Back in May, we delivered Katalon Studio 8, which included features to provide better scalability options and a better user experience.

And because we are not in the business of keeping you waiting for the latest and greatest, today, we are excited to announce the release of Katalon Studio 8.1 (KS8.1). This release comes jam-packed with a broad set of new features as well as dozens of improvements and fixes to continue providing you with a top-notch testing experience. Read on to learn more about what’s included in this release.

Studio 8.1 delivers features that aim to increase the resource and cost-efficiency of your automation cycle, provide better integration with Azure Test Plans, and enhance mechanisms to tackle test flakiness.

A flaky test is a test that will pass or fail regardless of the changes done to the underlying code. Test flakiness is caused by issues with new code, external factors like faulty infrastructure setup or network glitches, or an issue with the test itself. The unreliable nature of test results yielded by flaky tests is a never-ending war and it represents one of the most important challenges in the test automation industry because, without accurate results, DevOps teams can’t make accurate decisions about their product releases.

To tackle test flakiness, developers rely on the following steps:

At Katalon we understand how important it is for developers to be able to make data-driven decisions. In this release of Katalon Studio, we have improved the logic of our reporting mechanisms so they are more intelligent and intuitive to provide better insights on test results. Studio 8.1 groups all executions into one report and makes it much easier to find inconsistent results or false positives.

Additionally, we have enhanced our test result third-party integrations with tools like TestOps and qTest so the report shows only one final set of results rather than multiple sets of results for each test case. This feature allows users to easily identify failed or passed test results faster. 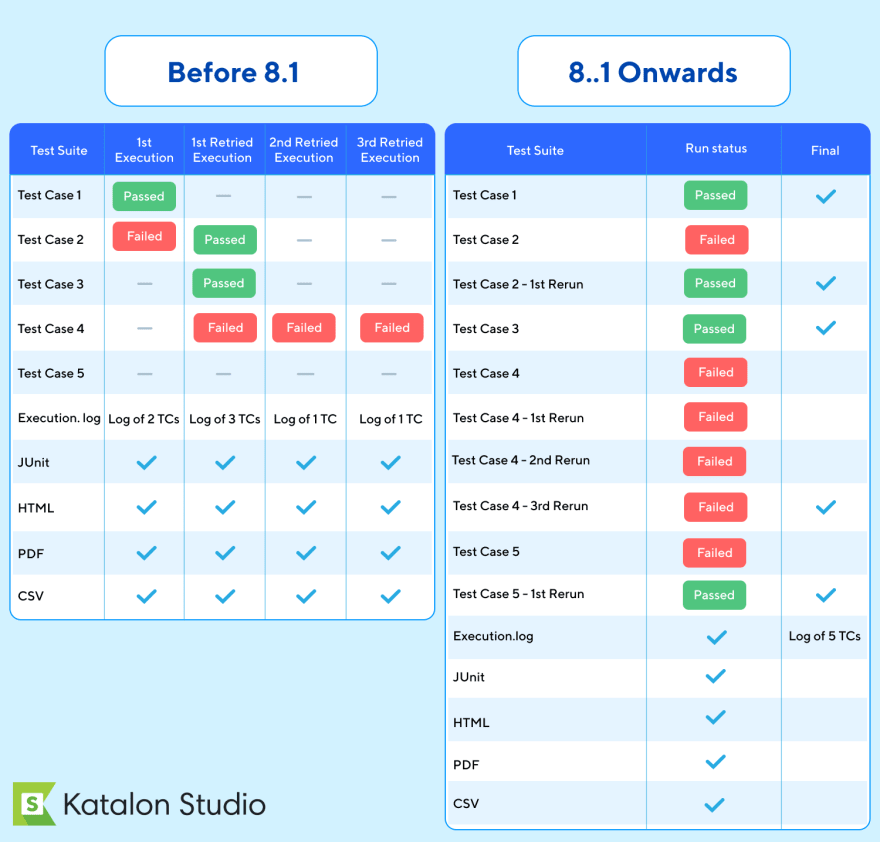 To learn more about the reporting enhancements included in this release, check out the release notes for Katalon Studio.

One of the benefits of test automation is the ability to test early, often, and anywhere in the development cycle. In Studio 8.1 we leveled up these benefits by allowing users to stop Test Cases when they detect an issue early in the cycle by establishing a failure tolerance threshold.

This new feature allows users to terminate the Test Case or Test Suite Collection execution when there is a significant number of test cases in an execution that has failed, enabling them to provide feedback earlier in the cycle rather than waiting until the test cycle is completed. Failure thresholds will help make more efficient use of testing devices and improve savings on infrastructure costs, especially for cloud users.

To leverage this feature we have included a new command option, -maxFailedTests= , where T is the maximum number of failed executions allowed before the test is stopped. Once the Test Execution stops, Katalon Studio will generate the report containing all the insights. This feature is only available for tests executed through the CLI or CI using the runtime engine.

To learn more about how to leverage this feature in your testing environment, check out the Katalon Studio 8.1 release notes.

Building on the promise to always provide the best integration with your existing testing platform, Studio 8.1 delivers a better way for users to map Studio test results to release views in Azure Test Plans.

In Azure DevOps users have the ability to get a full view of the quality of a release, including passed and failed tests as well as the number of runs. Studio’s enhanced integration with Azure Test Plans includes a new parameter, “Release Definition ID,” which can be used to map test results with releases in Azure DevOps.

Starting in Studio 8.1, users can enable this feature from the Project Settings menu and add a numerical ID to the “Release Definition ID” parameter. Alternatively, testers can use the new command option “–info-adoReleaseDefID=” and based on the specified Definition ID and its stage, pass them to the Test Run properties on Azure DevOps.

We are thrilled about Studio 8.1 and we hope you are too. We encourage you to download Studio 8.1 to start taking advantage of its many new features and improvements.

For a complete list of new features, improvements, and fixes, please visit the release notes. As always, please post any questions, ideas or concerns on our community site, we are eager to hear from you.

Once suspended, katalon will not be able to comment or publish posts until their suspension is removed.

Once unsuspended, katalon will be able to comment and publish posts again.

Once unpublished, all posts by katalon will become hidden and only accessible to themselves.

If katalon is not suspended, they can still re-publish their posts from their dashboard.