To speed up the development process, development and operations were integrated, which is now referred to as DevOps. Unfortunately, a critical layer between Dev and Ops was overlooked: the fixed cycle of testing. To ensure swift turnaround, improve overall efficiency, and maintain the continuous status for testing in the DevOps cycle, a new methodology has evolved: DevTestOps.

In essence, DevTestOps is a combination of DevOps and continuous testing. Testing early, regularly, and across the software delivery pipeline are all methods that are used during the software testing process.

According to DevTestOps, a CI/CD pipeline should be included in the continuous testing architecture. This practice emphasizes the importance of providing continuous testing feedback to developers throughout the stages of product development, reducing business risk and the possibility of discovering defects later on. Using DevTestOps across the stages of product development helps to mitigate business risk and decrease the chance of faults appearing in later stages.

*DevTestOps – A New Manifesto for Agile *

DevTestOps technology has officially ushered in a new era of development, upending the practice of carrying out testing only after code is complete. 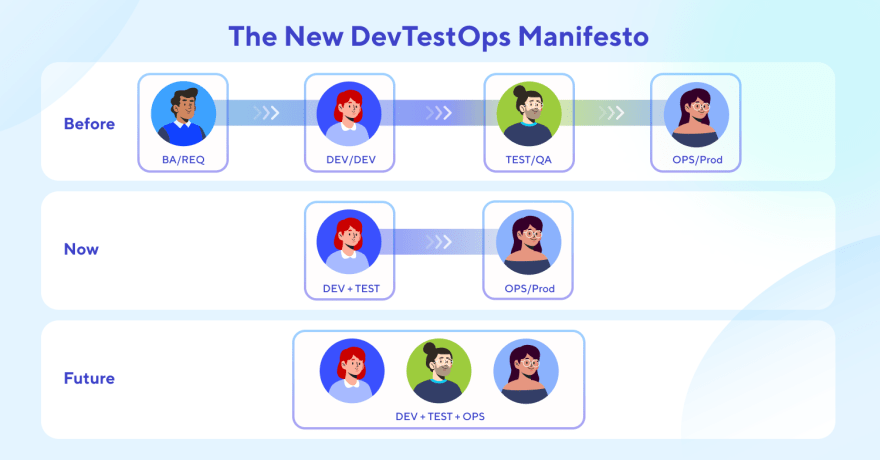 Continuous testing has revolutionized the market since it aids early product feedback and allows for early problem detection, which ultimately helps to reduce the costs associated with fixing issues after the fact.

In the typical software development life cycle (SDLC), testing is done at the end of the development cycle when the entire product is complete. There is a time delay when testing and fixing errors. Exposing new vulnerabilities is much harder, more time-consuming, and more costly when the already incorporated new code is factored in.

However, over the last year, many firms have begun to “shift left” testing software development much earlier in the process. Professionals in testing and QA emphasize that testing should be included in each debate and discussion, from developing a common understanding of new features, to the planning of the delivery pipeline, to monitoring and monitoring the production use.

Conducting the testing process as early as possible in agile teams is crucial to move into the fast lane, and to do so requires DevTestOps.

Spotify provides a real-life example that showcases what it’s like to implement an effective DevTestOps approach to scaling an agile team. With an estimated 286 billion users, Spotify is the world’s largest and most popular audio streaming service. A contributing factor to Spotify’s success is its unique approach to increasing team agility, or more specifically, its DevTestOps approach.

Spotify’s model is well-established and people-driven, emphasizes the importance of the internal network, communications, and most importantly, quality responsibility across all teams – from developers to testers, and operations. With testing present in all stages of the DevTestOps cycle as a must-do process in all departments, Spotify team members are equally accountable for the end-to-end product.

In the Spotify model, developers code new product features, such as adding playlist personalization or song shuffle. Integrating CI tools into the workflow helps to easily test every new code iteration and reduces the opportunity of adding errors. As a result, if the test fails, developers can directly change the artifacts on the build before they go into deployment. This practice boosts the confidence of developers by reducing the odds of rewriting the entire test, as the defects are fixed ahead of time.

Moreover, QAs/testers perform testing and design test scenarios to detect any errors that need to be addressed, such as a non-clickable button on the website or if the music abruptly stops playing. With major code bugs fixed in the earlier stage, QAs can now focus on other parts of the code that are naturally isolated and have their own internal complexity. Additionally, with continuous testing, QAs can monitor and handle a larger volume of data, thanks to automated log parsing. Subsequently, Continuous Integration (CI) build log files are parsed automatically to provide fast and accurate feedback, from application requests to error messages.

Think of continuous testing (CT) as a good habit in your daily routine. Similar to how drinking enough water daily makes you healthier, continuous testing makes your workflow more agile as it sets the routine for bug detection, thus triggering faster product development and informing up-to-date data to both Devs and Ops. Adding continuous testing in your DevOps cycle (DevTestOps) ensures that the appropriate test infrastructure, platforms, and frameworks are available and configured before testing begins. Some of the benefits are:

Nevertheless, adopting DevTestOps to the fullest is not an easy task. Developers need to adjust to a new method of working, in which code testing is also their responsibility. QAs/testers are more involved and provide their knowledge, which helps teams create appropriate tests and makes the process more efficient. The operations team must now ensure that there are no mismatches between development and staging environments.

To kick-start DevTestOps, everyone on the team must be on the same page and understand that testing occurs throughout the entire workflow.

And why you should invest in DevOps Orchestration with Katalon!

Next Step | How Katalon Can Help

To fast-track your DevTestOps approach, Katalon Studio and Katalon TestOps – the bundle adopted by over 100,000 enterprise ecosystems – is the ultimate solution for you to consider. Here’s a sneak peek of how this bundle can aid your teams:

While there may be a great solution for one company, it doesn’t mean it will be a good fit for your organization. With over 100,000 companies and teams using Katalon to personalize their test strategies, we’re here to help you start your DevTestOps journey with confidence, assisted by Studio and TestOps.

The Article DevTestOps Orchestration for Agile Teams | What & How to Make It Right appeared first on Katalon Solution.

How to learn AWS for free ?

27 open-source tools that can make your Kubernetes workflow easier 🚀🥳

How to deploy a node.js app to digital ocean using Docker