Flaky tests are a bane of every larger test suite out there. At first they show up very rarely. Once in a hundred CI runs you need to manually re-run it to have the test suite pass. It's not that bad, so you just do it. Then more of them appear. And before you realize, you have more failed runs that successful ones. The CI process has lost its value and everyone is frustrated.

If you use continuous delivery, when deploys are automatically done from some specific branch after tests pass, flaky tests are simply disastrous. But even if you don't have this setup, they damage your trust in the tests and hurt your delivery process. Having the test suite green before merge will soon become a not-really-mandatory requirement (because how are you supposed to deliver this hotfix to the production when you have to re-run your 20 minutes tests five times before merge?). You will also inevitably start to treat every tests failure as a flake, making you miss legitimate failures.

This is why your team should make its priority to not have flaky tests. Unfortunately not many team do that, settling on "yeah, it works most of the time". I had a luck to work in a team that treated flaky tests seriously - and even without a written contract about it! It worked pretty well, so I want to share how the process of dealing with such situation looked like. 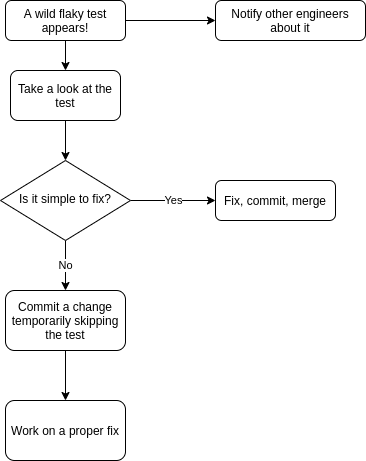 It worked very well and not only helped us have relatively flaky-free tests but also encouraged people to take responsibility for the common codebase. The first reflex was to try to fix it, not to try to blame someone for breaking it. I highly recommend every team to try it.

Run your Cypress Tests in a Github Workflow

Paweł Świątkowski
My Current GitHub Profile
#github #showdev #career #discuss
Which CSS Framework should I use ?
#discuss #webdev #beginners #help
What are some Regular Expression concepts you find hard to grok?
#regex #discuss