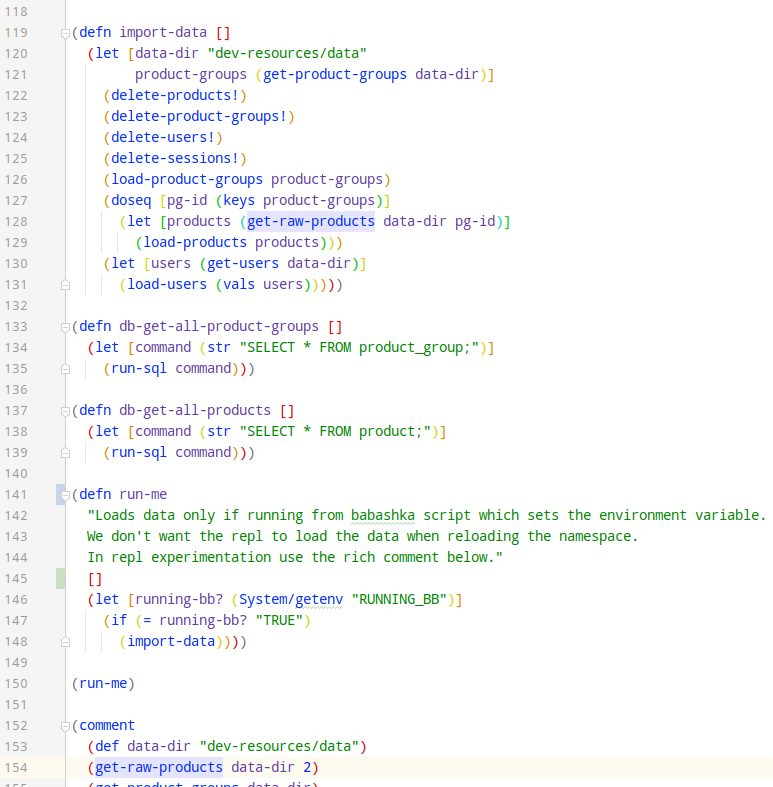 I never bothered to learn Bash well enough to be fluent with it. If I needed anything beyond basic Bash stuff I immediately used Python in command-line scripting.

I’m currently implementing my Clojure simple server again, this time using the Integrant library. In this new version, I implemented three data stores: CSV, AWS DynamoDB, and Postgres. I had already implemented importing development data into DynamoDB (using Python), this time I used Babashka to import development data into Postgres - mainly just to have an excuse to try if I could replace Python with Clojure when scripting something with Bash.

The scripts can be found in my Clojure git repo in directory postgres.

Babashka is “Clojure for scripting”. As the implementor of Babashka, Michiel Borkent, says in the Babashka home page: “The main idea behind babashka is to leverage Clojure in places where you would be using bash otherwise.” When running Clojure code with Babashka your script is not compiled to JVM bytecode but executed with a native binary runtime which implements certain core namespaces of the Clojure language. Therefore:

Babashka home page provides a good explanation regarding the Differences with Clojure.

The flag is the RUNNING_BB export above.

Then in the Clojure code we have a top level form (run-me) in the namespace (file bb_postgres.clj):

I.e. when reloading the namespace REPL runs the code but if the flag is not set it doesn’t actually do anything - it imports the code only if we are running the code using Babashka. The reason for this is that when I reload the namespace as part of my Clojure workflow I don’t want the data import to happen. For development purposes to test importing data, or any other function, I have a rich comment at the end of the file:

The comment block is here so that REPL does not run this code when reloading, of course. The function calls you see inside the comment block are just experiments added in no particular order. I can send any of these forms individually to be evaluated in the REPL - a typical Clojure trick when developing with REPL.

I really like the idea that I can now use Clojure in shell scripting. Of course, I could use Clojure in shell scripting without Babashka but starting a small Clojure script on JVM has certain penalties (if you are interested about the topic, read an excellent article Clojure’s slow start — what’s inside? by Alexander Yakushev to learn more about it). Not so with Babashka - Babashka boots lightning fast:

The use cases using Babashka in my personal scripting probably is a bit like I used Babashka to import data into the Postgres database in this exercise:

I.e. parsing CSV, transforming data, and then call some program with the transformed data, possibly read what was returned and do other stuff. You could possibly do all this using plain old Bash but I never bothered to learn Bash in that level that I can do more than test some flags and call other programs using Bash.

Another ad hoc example. I was wondering how many distinct categories there are in my blog. Of course I could check the Jekyll generated site, but let’s see how we can solve this using Babashka:

I never bothered to learn tools like grep, sed or awk properly, since if I couldn’t do something with basic Bash + very basic Grep I immediately turned into Python. Maybe for now on using Clojure with Babashka.

How Do I Use the Babashka Script in This Exercise?

I used Babashka to load development data into the Postgres data store. During development I built a custom Postgres image and provided a Just recipe to start the data store (file Justfile):

The run-docker-compose.sh starts the Postgres docker container, creates the schema and finally calls ./run-bb-load-data.sh which loads the data into the development Postgres data store:

Easiness. Both languages are pretty easy and fast to work if you have used them. Developing Python scripts is pretty fast - you just run the script in command line. Working with Clojure has one additional plus: you can use the Clojure REPL.

Library support : Python wins. When you are scripting in Python and you realize that it would be nice e.g. to use some AWS library - just use it (e.g. table_importer.py - the AWS boto3 library). The library support for Babashka is not as extensive, of course - but Babashka supports quite a few namespaces outside of clojure.core and also some additional libraries: Babashka built-in namespaces - keep eye on that page, maybe Babashka library support is growing in the future!

So, the library support might not be as good as with Python. But I really do love Clojure and if I’m implementing apps using Clojure it is really nice to do some ad hoc scripting using Babashka.

It’s nice to have another scripting tool in my toolbox: Babashka. Time will tell if I start using Clojure instead of Python as my preferred scripting language, thanks to Babashka. At least in this exercise Babashka did really well.

Formatting Numbers in JavaScript with Intl.NumberFormat