In this article, we explain how to generate various types of graphs such as complex networks, and evaluate the generated graphs using metrics. Before generating the graphs, we load the necessary libraries and define functions to evaluate the density and cluster coefficients.

A Watts-Strogatz graph is a graph generated by connecting all vertices to x neighboring vertices in a lattice with edges, and randomly replacing these edges based on a certain probability.
When the probability is set to 0, the graph is a lattice, when it is set to 1, it is a random graph, and when it is set to around 0.1, it is possible to generate a graph that is both a lattice and a random graph.
In Watts-Strogatz graphs, shortcuts are formed, and the average shortest distance generally satisfies the small-world property. 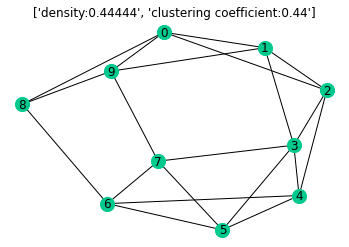 A Barabási-Albert graph is a scale-free graph in which vertices grow into hubs by adding new edges with high probability to existing vertices with a large degree. The algorithm for generating a Barabási-Albert graph begins with a complete graph Km consisting of m vertices. A new vertex is added to the complete graph, and an edge is added from that vertex to each of them vertices that already exist. 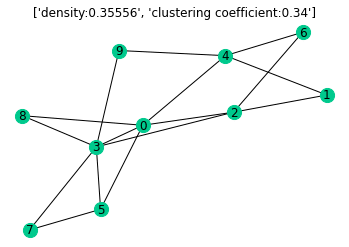 In this article, we generated Watts-Strogatz and Barabási-Albert graphs to measure the density and cluster coefficients. Since it is possible to generate various other complex networks, it is easy to understand the characteristics of the graphs by referring to the links below.

Hacking BeReal - A practical lesson on “Man in the Middle” attacks

Understanding how a Blockchain works with Python

Once suspended, karapto will not be able to comment or publish posts until their suspension is removed.

Once unsuspended, karapto will be able to comment and publish posts again.

Once unpublished, all posts by karapto will become hidden and only accessible to themselves.

If karapto is not suspended, they can still re-publish their posts from their dashboard.

Once unpublished, this post will become invisible to the public and only accessible to karapto.

Thanks for keeping DEV Community 👩‍💻👨‍💻 safe. Here is what you can do to flag karapto:

Unflagging karapto will restore default visibility to their posts.